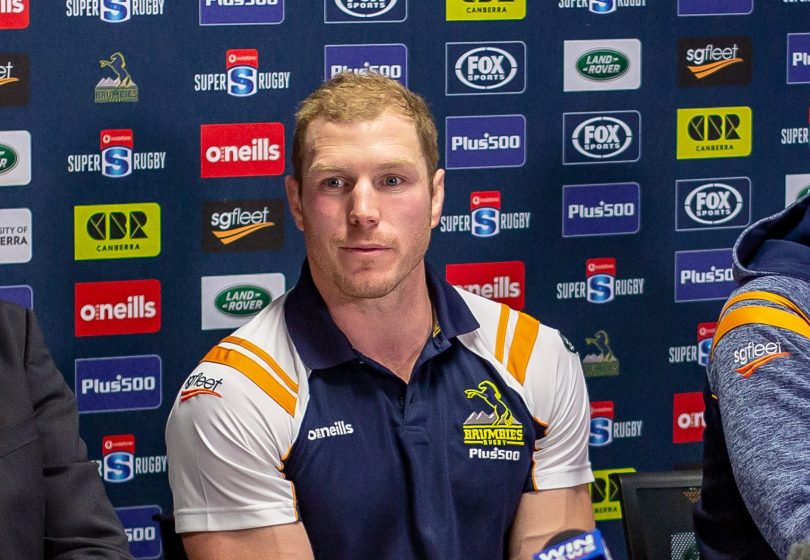 David Pocock announced his retirement from rugby in 2019. Photo: File.

Former Wallabies captain and political activist David Pocock has thrown his hat into the 2022 ACT Senate ring, declaring he will run as an independent on a platform of climate change action, social justice and integrity in politics.

Zimbabwean-born Mr Pocock, who has been an ACT resident since 2012, has been endorsed by the proACT group, which takes its inspiration from the ‘Voices for’ movement to elect independent candidates to Parliament.

His decision to run stems from disenchantment with the current state of politics and what he says is a lack of progress on key issues.

“I want to represent my community and advocate for change on the issues we care about most,” he says.

That includes a science-based climate and energy policy, protecting the environment and giving First Nations people a voice in Parliament by backing the Uluru Statement from the Heart.

“We need politicians who will turn the challenges we face into opportunities for Australia,” Mr Pocock says. “And now more than ever, we need political courage.”

He says he will also be a strong advocate for the ACT, including backing territory rights to legislate on assisted dying.

Mr Pocock’s candidature adds to a now-crowded field on the left that must leave Liberal Senator Zed Seselja feeling more confident than ever of withstanding any challenge.

There are only two Senate seats up for grabs and they have traditionally been split between the major parties, although the Greens are forever optimistic at dislodging the conservative Senator Seselja.

But with popular Labor Senator Katy Gallagher untouchable in one of the seats, that leaves the Greens’ Tjanara Goreng Goreng, Kim for Canberra’s Kim Rubenstein, a constitutional lawyer, and now Mr Pocock battling it out with Senator Seselja.

Mr Pocock says he wouldn’t run if he didn’t think he could win, but the reality is that the progressive vote will split, and preferences will likely flow to Senator Gallagher who will garner the majority of votes.

It is unlikely that Senator Seselja will suffer any erosion of his solid support base of about the 33.3 per cent quota necessary to be elected. In 2019, his primary vote dipped to 32.4 per cent but there were more than enough preferences to secure the seat.

Mr Pocock has long combined rugby with politics, campaigning for the environment and once getting arrested at a coal protest, and supporting same-sex marriage.

An openside flanker, he played 78 times for Australia and ran out with the ACT Brumbies from 2013 to 2019.

Australia will likely go to the polls next May.

History tells us that the Senate outcome will be 1 ALP & 1 LIB.
I can’t see to many conservative voters voting for a candidate that is to the left of Katy G.
For Mr Pocock to any chance, we’d need a 3rd Senate seat, if he could out poll the Greens or 2nd ALP candidate.

“and preferences will likely flow to Senator Gallagher” I don’t think this is how preferences work. At the last election, the very first thing that happened in the distribution of preferences is that she was elected, and the extra votes she received (about 1/6 of a quota) was distributed, mostly to the next Labor candidate. The only reason having more left candidates would benefit the Liberals is if voters let their preferences exhaust before running through all the alternatives.

we need independants that will put hte people and the community ahead of party agendas.

SO GOOD. Zed has been a Liberal puppet with little relevance.

“I want to represent my community and advocate for change on the issues we care about most,”

Health and Education are the two issues I would like fixed. Are you going to be an advocate for these?

“That includes a science-based climate and energy policy, protecting the environment and giving First Nations people a voice in Parliament by backing the Uluru Statement from the Heart.”

Assume you’re aware that health and education are responsibilty of ACT government? Besides im pretty sure that he is able to advocate on more than one issue

My bad – I thought he was running for the local circus. He should be much more useful for the next six years on the hill.

Why education? He isn’t planning for his own children.

You do realise that Territory senators are only elected for 3 years…..

Anthony Briscoe YAWN … STOP …. Katy has been smashing it … Zed pops up when told … they are chalk n cheese … Zeds got Zero credibility or achievements.

”8 Dec 2019 — Wallabies star David Pocock and his wife Emma vow not to have children because they want to save the planet ”.

Wonder how the above will go down with ACT families.

( perhaps rather well following a lot of home schooling )

I have a family and am fine with it.

“arrested at a coal protest”

Not a good role model for a senator.

Perhaps a better role model than the usual political time servers selected as part of factional deals that the libs and labor generally select.

Jam,
Flagrantly breaking laws because you don’t like them is a recipe for anarchy.

It should never be applauded.

Sure, but going into politics because you don’t like a particular law and would like it changed is not

Jam,
So you think he’s gone into politics to make trespassing and hindering businesses legal?

I wonder if he declares his arrest details on his visa applications? In some countries any offence involving arrest is enough to deny entry.

No, obviously that was a simplification. I imagine it is something more like that he wants to stop the same thing he was trying to stop by (illegally) protesting.