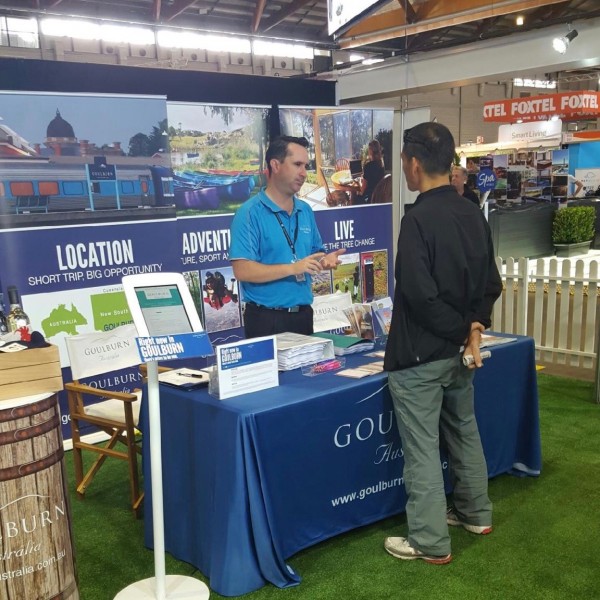 Whether renting or paying off the mortgage, financially stretched Sydneysiders are being offered relief over Easter from Goulburn.

At the Royal Easter Show Goulburn is occupying a stand twice the size it has been taking since the 2012 launch of the Right Now In Goulburn campaign.

People promoting Tamworth, Armidale, Dubbo, Orange, Wagga Wagga and other country centres are on the housing affordability bandwagon. At Orange a three-bedroom home in Summer Street is on the market for $299,000. In Goulburn, a three-bedroom California bungalow in Kinghorne Street was sold for a a similar amount.

But Orange is almost four hours from Sydney. Goulburn is only two hours. The location and price edge are as sharp as ever in the latest figures which show Sydney house prices leapt 18.6 per cent over the last 12 months, and Canberra’s jumped by 12.8 per cent.

Goulburn identified housing affordability as negatives for living in Sydney and Canberra in 2012.

“The cost of living was becoming suffocating, these people had a common problem,’’ Ms Price said. “They want to live their lives but not be slaves to their mortgages, that’s even if they are in the mortgage game, a lot of them were renting and struggling to break into the market.

‘’We identified Goulburn had the perfect solution,” says Ms Price. “Affordability along with all the other beautiful attributes of living here, we wanted to put it out there, we have the solution, right now. You can actually solve your problem right now in Goulburn.’’

Since 2012 Goulburn’s median house price has climbed from $291,685 to $372,937, at a slower rate than Sydney’s, making the affordability story even more compelling.

“When we started telling people at the Sydney Royal Easter Show, about house prices they were just gobsmacked, they said why didn’t we know about this stuff?’’ says Ms Price.

An annual marketing budget of $50,000 has grown to $200,000. Two additional staff have joined the promotions team to focus on events and media and, with the council’s backing, momentum continues to build.

Ms Penning says: “The (Royal Easter) Sydney show is a significant investment, we have been happy every time.

“A lot of people at the Sydney Show say, ‘Oh, I already have a weekender at Windellama or Taralga, I’m still working full-time in Sydney’,” Ms Penning says.

“They are starting to spend more time down here, buying a little house to renovate.” Some weekenders eventually begin a little business, like a Christmas tree farm, or growing and exporting cherries.

The marketing team uses social media and Instagram in particular to promote Goulburn, helped these days by community groups and individuals who are becoming ambassadors.

“It is music to our ears, they are helping us in what we are trying to achieve,” says Ms Price. “Sometimes we feel like it is the whole weight of the community on us to promote the place, but these people can be assisting us, and they really are.’’

Goulburn’s housing prices are crazy high. There is room around Goulburn to build houses for millions of people. There is SO MUCH land available that there should be no premium on the land.

If you pay anything more you are just paying a speculative premium.

Shaun Cummins - 36 minutes ago
And which body is going to be the first experiment? A Frankenstein Monster. View
Despina Despina - 2 hours ago
What a waste of money. Give it to me instead!!!... View
Francois Janse van Rensburg - 2 hours ago
I'll do it for $50 000 !!!! View
Opinion 181

Rowan Hartcher - 5 hours ago
Alan Hopkins like wise View
Peter Quinn - 5 hours ago
So when can we celebrate colonisation????. Whatever day is nominated it will always be contested View
Alan Hopkins - 6 hours ago
its not that hard to change the day. just do it... View
Opinion 24

Bradley Heanes - 7 hours ago
Didn't the defence department already appologise for this? (Even though they were assisting the RFS at the time) Didn't they... View
franky22 - 10 hours ago
Why can't the ADF simply state that they made a mistake. View
News 21

Julie Macklin - 11 hours ago
Mark Katalinic Likewise why not use the roads for car racing? No, silly suggestion, as is yours. View
Julie Macklin - 13 hours ago
Tim McMahon Well, mine hasn't had a check since they closed the government registration check in Dickson years ago. Yes the c... View
Sport 3

Magpie Allan - 12 hours ago
Undoubtedly the two icons are among two of the greatest men you’ll could ever meet.... View
Breaking 5

Tramcar Trev - 13 hours ago
Simple do what other regions do, use local volunteers to staff the visitor centre. View
show more show less
*Results are based on activity within last 7 days

A toxic outbreak of bacteria and blue-green algae has closed many of Canberra's waterways and lakes, due in part to...
Community 10

@The_RiotACT @The_RiotACT
This week’s newsletter covers everything from a sumptuous Lebanese breakfast spread to algae in Canberra’s waterways to lively discussion around Australia Day https://t.co/hyR7zinwv6 (2 hours ago)

@The_RiotACT @The_RiotACT
Red & purple are the new black according to a group called the Red Hatters who provide encouragement + empowerment to women in Canberra https://t.co/nuHKJ26rGA (3 hours ago)

@The_RiotACT @The_RiotACT
Can you see yourself relaxing on the deck of this lovely Lilli Pilli home? The stunning elevated property offers the perfect opportunity to kick back & enjoy life https://t.co/exzSAWdrIG (4 hours ago)