Free Film Podcast ‘Pod Me If you Can’ 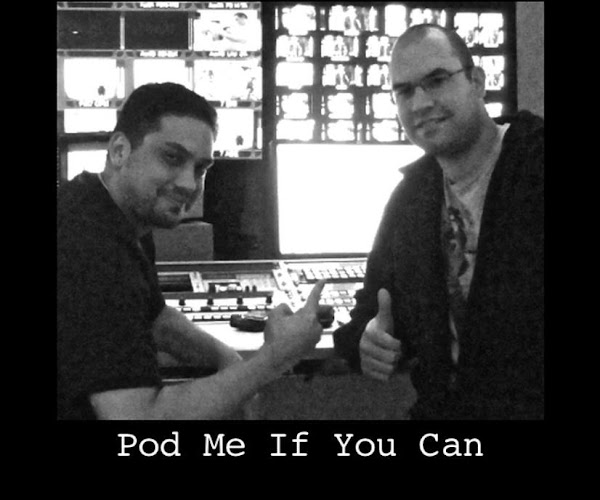 Canberra based Filmmaker David Farrell has teamed up with long time friend Lloyd Hughes to create a free film discussion podcast called ‘Pod Me If You Can’. David and Lloyd studied film at University and after a decade of discussing films together the podcast was born. The format of the podcast is to discuss recent releases after having watched them so be warned that the podcasts are full of spoilers.

One key difference from other podcasts is that Pod Me If You Can is more interactive. Listeners are asked to request films through the facebook page and Dave and Lloyd try to accommodate their requests.

In 2006 David Farrell’s feature film ‘The Last Resort’ was screened at Electric Shadows Cinema and in 2008 his documentary ‘The Young and The Wrestlers’ premiered at Dendy. He lists Christopher Nolan, David Fincher and Stanley Kubrick as his favourite Film Directors.

Pod Me If You Can is currently featured in the New and Noteworthy Podcast section of Itunes.

For more information and links to Pod Me If You Can on Facebook and Itunes go to www.podmeifyoucan.com

Kathy Johnson - 4 minutes ago
Barb made our eldest sons blanket 38 years ago, then the blanket was passed on to our eldest grandson 11 years ago. Our blank... View
Poppy Griffiths - 8 hours ago
Oh my goodness!!!! How very precious would it be to have one of Barb's beautiful blankets.... it certainly would become a fam... View
Donna Gordon - 9 hours ago
Gorgeous. So beautiful to see this gorgeous creativity still being brought to life. ❣️ View
Business 7

Kim-Ling Richardson - 12 minutes ago
Serina Bird Great idea and so exciting! Is the website still under development? Not much was working when I just checked View
Sport 125

Eric Tenthorey - 18 minutes ago
Graham Smith I agree completely. It's like a progressive tax. View
Eric Tenthorey - 31 minutes ago
In Canada you actually need to pay a fair amount to access a facility like this. As you would with skiing. A small parking fe... View
Andrew D'Arnay - 39 minutes ago
Just ride your bike !! View
Community 22

Shannen McCann-Geiger - 51 minutes ago
The wife looks super happy to be there View
Will Scott - 9 hours ago
Pat Smith he always has loved the tale of the bushranger View
Alexis Nerrida - 9 hours ago
Ginger Oliver chris hemsworth is cool but it’s no local legend/matilda’s star ellie carpenter... View
Opinion 15

Denise Bourke - 8 hours ago
More dodgy research on this eh? Like the research on having weed in family backyards? Kids form addictions without parental c... View
Iain Somerville - 14 hours ago
This is not just about the right to choose to die. It is also about Canberrans being classed as lessen citizens by being deni... View
David Newman - 14 hours ago
Linda, exactly. It’s as if the ACT’s and NT’s residents have a lesser right to self determination than residents of the... View
Opinion 101

tuggeranongist - 10 hours ago
All things being equal, I would prefer to deal with a large institutional landlord than an individual one. I suspect many oth... View
Redgum - 11 hours ago
Better Renting is correct on one point only. The decision to invest in a rental property is a business decision. Investments... View
Community 27

James Forge - 11 hours ago
Ben Oostermeyer I agree. The usual excuses of transport costs and lack of competition don't wash when fuel that has to travel... View
News 10

kenbehrens - 12 hours ago
Government charges contribute towards the high cost of rent in Canberra. It's Government policy to increase Rates, to a level... View
Geoffrey Bell - 14 hours ago
Mandy Truman $206 cheapest share place i could find. https://www.allhomes.com.au/share/search?region=canberra-act&district=gr... View
News 246

Claire O'Brien - 12 hours ago
My sister broke her back on this same flying fox in the late 80s/early 90s. The drop is too high in areas. My daughter did na... View
show more show less
*Results are based on activity within last 7 days

@the_riotact @The_RiotACT
Life is slowly returning to normal after #lockdown, but Zoya Patel wonders whether showing proof of #vaccination might get us back to post-COVID normal faster https://t.co/qA5M8Xn0p8 (14 minutes ago)