From Baking to Business: Meet the Woman Behind Veganarchy 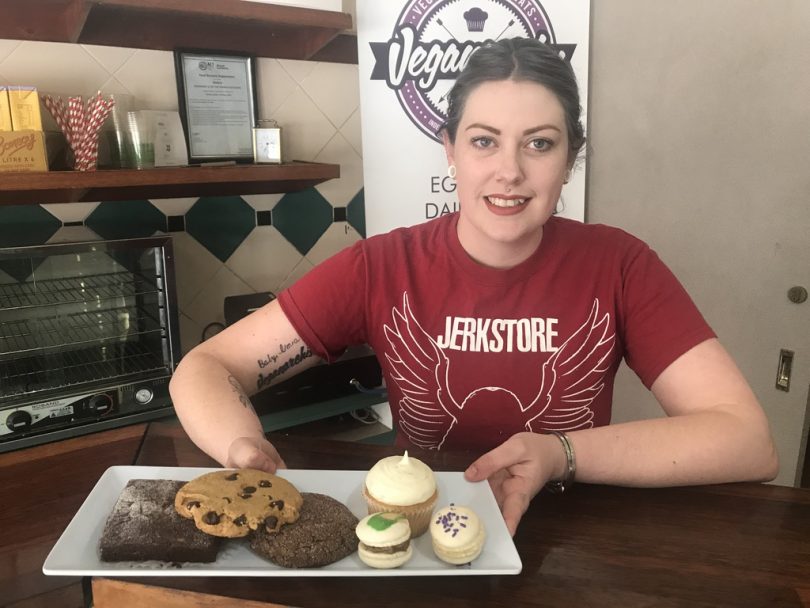 Owner of Veganarchy Gabrielle Carr took her passion for baking and turned it into a business. Photos: Branka Prodanovic.

Meet the young vegan baker and entrepreneur bridging a gap in Canberra’s food culture with her local business, Veganarchy.

Specialising in 100 per cent vegan baked goods, Veganarchy makes it easy for non-meat eaters to access a range of in-house made products from cupcakes and waffles to plant-based bacon, chicken, and cheese.

Gabrielle Carr started the business with a friend over 11 years ago to pursue a passion for baking vegan treats for the wider community. The pair would bake the treats and take them to local shows allowing people to donate money which would then be given to charity. Now a Canberra staple with a shopfront and a range of deli products, Veganarchy is ever growing.

It all started back in 2010 when Gabrielle was working in banking and found she struggled to find a work-life balance that suited her, causing much stress.

“I left my job at the bank because I just couldn’t handle working full-time anymore and that’s how this [Veganarchy] came about. It just kept growing and growing and baking was always something I did to take my mind off everything and ease myself out of the world and what was in my head… so my hobby became my job.” 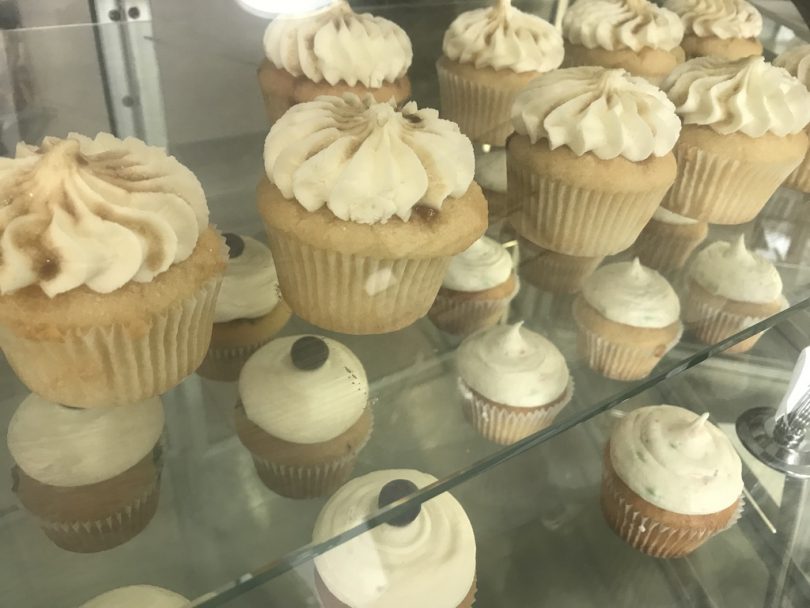 Gabrielle started wholesaling and then progressed to hosting market stalls with her very first set-up being at the Old Bus Depot Markets in Kingston.

“It all started off as sort of an outreach for veganism and there was demand so it just grew into a business”.

After years of selling baked goods at markets and shows around Canberra, an opportunity came about a year ago for Gabrielle to open a shopfront on East Row, taking over the ownership of French-themed bakery Croissant D’or.

With a home-base established and growing demand for her products, it was only a matter of time before Veganarchy started to expand. 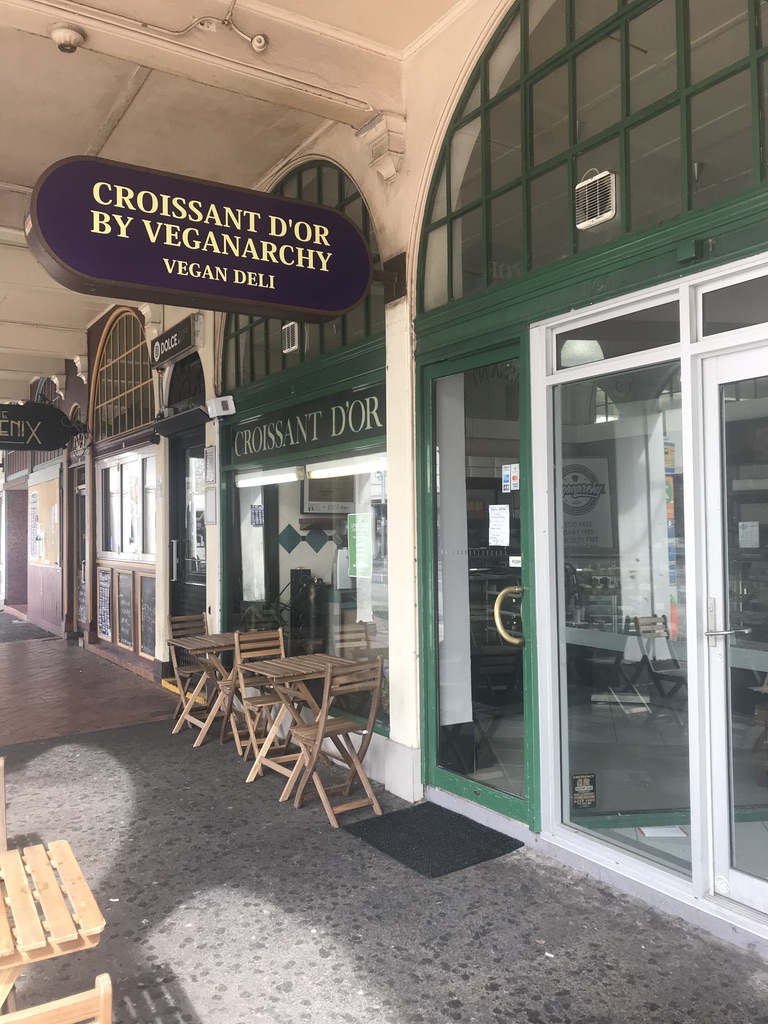 “A shop was obviously the end goal for what I was doing, or a goal in what I’m doing, and every time I thought about it, I thought well I’m known for my baked goods but that’s not all I want to do.

I really enjoy the savoury side of cooking so it made sense to create a deli because I had this range of deli products that I’d been cooking at home for myself and my family and my friends, and everyone was like ‘you should sell these….’ so it just developed into ‘I can make this range of products and I need to figure out how to showcase all of them and have an outlet to the public’”.

Everything with the Veganarchy label is made fresh, in-house, from locally sourced produce. The business also donates all food scraps to Canberra’s Little Oaks Sanctuary.

Entering the venue, customers can expect to choose from a broad display of sweets including Gabrielle’s famous cupcakes (Gabrielle creates her own shortening for the cupcakes and icing), donuts, brownies, and cookies. Those looking for something more wholesome for a quick lunch can order anything from fried chicken and waffles to focaccias and burgers.

To keep the French vibe alive from the shopfront’s previous life, Gabrielle also started stocking vegan macaroons which she sources from Albury.

While initially starting out to reach vegan clientele, Gabrielle admits that 60 per cent of her customer base is non-vegan.

“From doing markets I met a lot of non-vegans…a lot of people with allergies, or their children have allergies that come in and they found us at the markets and they were always asking when are you going to open a shop front, your cakes are amazing, we’d want to be able to access them all the time.” 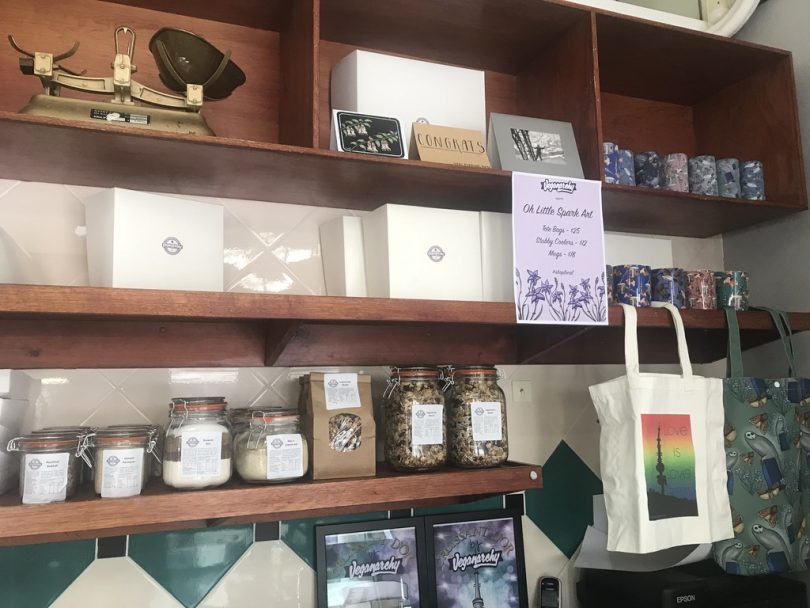 Veganarchy sells a range of products in store.

Perhaps Gabrielle’s biggest challenge is continuing having to reinvent herself to satisfy the demand that continues to flood into the shop. She says that she started creating new items such as crème brulee and lemon meringue-flavoured donuts as “people are really interested in those products because my other products have been around for so long so these ones are a little bit more unique and a little more exciting and you have to get in at the right time because they sell so quickly!”

But Gabrielle refuses to take all the credit as the success of Veganarchy is a collaboration between herself and her two employees – Linda and Ruby. She is also grateful for her support network over the years including her mum and friends who helped her career kick-off back at the ANU Co-Op and Café Essen where she was initially asked to bring sweets in to sell.

Identifying as non-binary, queer and having suffered mental health issues throughout her life, Gabrielle also highlights that the aim of the shopfront was to create a safe space that is “really inclusive and friendly”.

Providing support for the local vegan community and developing a welcoming non-discriminatory space means that Gabrielle has become a role model in Canberra, even nominated for a Telstra Business Women’s Award, and constantly described as ‘wonder woman’.

Her end goal is to keep building her business and eventually publish a cookbook that she has been working on with her mum for the last five years.

“It’s all of our family recipes and all the recipes that we have created together. It’s all her versions because she’s not vegetarian or vegan, and then you flip it over and it’s all the vegan options of the same recipes.

I feel like that’s a really important step because I went vegetarian at 16 and my mum didn’t get it…she didn’t know how to help me. There’s a lot of young people that are going vegan still living with their families and having those moments of conflict and they need that support, so I feel like a cookbook, this cookbook in particular, will be great for them”. 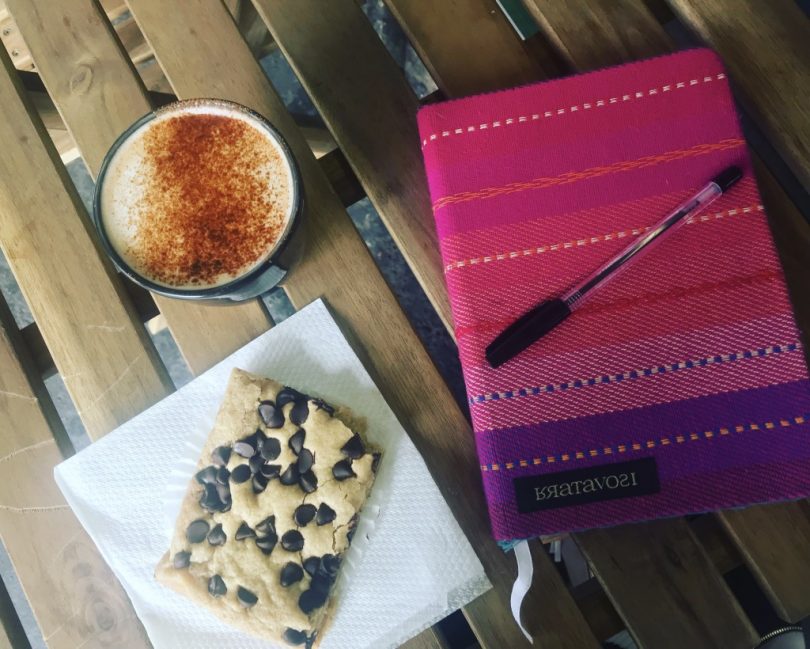 Coffee and a choc-chip blondie make for the perfect snack.

You can find Veganarchy permanently at Croissant D’or, as well as at the upcoming Living Green Vegan Markets and Canberra Pride Markets.

Eddie Xia - 5 hours ago
Those trees are not that extremely danger at all. Otherwise it should be long gone when flooding and bushfires were there. View
What's On 6

Marga Varea - 5 hours ago
Nice article! Hope many people will be able to watch the film on Friday! View
Community 11

Bek Clark - 7 hours ago
Yeah, like the highways leading from coal mines to port. Fun times. View
Robyn Holder - 8 hours ago
So many they are struggling to keep up esp when some weeks it hardly stops raining. You can't fix them wet. View
Mike l'Pirate - 10 hours ago
Nada Krstin the big issue is it generates a vast difference in vehicle speeds between 20 and 60kph. Differences in speed and... View
News 7

TimboinOz - 9 hours ago
Wowww! What a lovely story.... View
Community 4

George Watling - 10 hours ago
I have serious doubts about this micro-forest method. Lots of claims are being made about its benefits but there is no scient... View
Business 1

Capital Retro - 10 hours ago
What are the tax implications of these schemes? They are being marketed as commercial in spirit to deal directly with distrib... View
Community 29

nickwest - 11 hours ago
I'm not sure about the politics but the rates increase is supposed to eventually replace stamp duty. The idea is to reduce to... View
News 11

A disabled parking spot outside Mawson Domino's pizza is the latest spark in an ongoing debate about roads and parking...

Hot in the City: The Downer cafe that’s going gangbusters!

@The_RiotACT @The_RiotACT
When Pansto the rakali was recently discovered in Queanbeyan, he had significant health issues, but now he's been nursed back to health by Wildcare volunteers and released into the wild https://t.co/wL38Yz9hAG (9 hours ago)

@The_RiotACT @The_RiotACT
Symphonies, country music, ceramics - there really is something for everyone this week. As always, check ahead before you go https://t.co/5ZSYZ1CzVr (10 hours ago)

@The_RiotACT @The_RiotACT
Planning Minister Mick Gentleman has stepped in to approve the Canberra Hospital expansion, but both the @CanberraLibs and @GreensACT have slammed the decision https://t.co/Y0hrUZoUE0 (12 hours ago)