From Chris Isaak to Clare Bowditch, Enlighten trims down 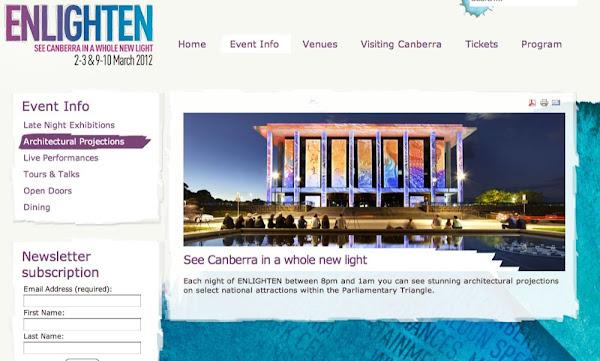 The Enlighten festival website has been launched for the 2012 event.

In stark contrast to last year they’re downplaying the performers and there has been no helicopter arrival by ageing rock stars.

This is probably a good move. One suspects people will come for the lights and some good music as much as to see well past their prime legends of yesteryear.

UPDATE: Andrew Barr is selling it and making clear that they’re integrating Enlighten with the Canberra Festival this year. Minister Barr says the highlights include:

10 Responses to From Chris Isaak to Clare Bowditch, Enlighten trims down
Filter
Showing only Website comments

That’s a grand total of two items that could be actual highlights. Is there any limit to the obfuscation around festival activities and failed entrepreneurial activities by this inept government?

On the other hand, the activities should be reasonably cheap to run and linking the major tourist attractions in this way is a good idea. Extended opening hours are excellent for tourists as it allows them to pack more into their visit. The program actually looks pretty good to me, and is much more sensible than the very daggy effort they mounted last year.

I’m shocked at how many of these things I genuine want to go to. I think that they’re creative and interesting ideas celebrating the good things we have, and they don’t even involve the necromancy required to inflate Frankie Valli.

It all seems a little predictable to me…

No point star gazing at the library. The light pollution at Parkes is phenomenal. You would be lucky to catch Venus on a clear night.

“Late night viewings of Renaissance … Ten Centuries of Manuscript Treasures from Staatsbibliothek Zu Berlin at the National Library of Australia” – these are not actually festival activities, so how can they be “highlights of the festival”?
“A concert featuring Claire Bowditch and The Clouds at the National Museum of Australia” – OK, that’s ONE festival activity!
“Underground geological tours of Parliament House” – this is a tacked on “Science Festival” activity, with the science festival dead & gone it was available to be tacked on somewhere. Not a core activity, so hardly a “highlight”.
“A bush tucker long table dinner which follows a guided tour with a curator through the indigenous collection at the National Museum of Australia” – Indigenous collection that’s already there, not a curated collection for the festival. Long table? What, a couple of dozen tickets? Maybe 50 people? How does this qualify as a “festival highlight”?
“The screening of Lights! Canberra! Action! in the leafy Senate Gardens at the Museum of Australian Democracy at Old Parliament House” – you can’t double-up a “highlight” – is this a highlight of its own, as it always has been, and a parallel activity, or actually part of the festival?

A night of political comedy at the Museum of Australian Democracy – OK, festival highlight this qualifies! That makes TWO – though this activity will probably have very limited seating, not what you’d expect as the highlight of a festival for a population of 300,000 plus tourists and visitors … .

“star gazing at the National Library of Australia” “a talk on the science behind beer and wine at Questacon” – more leftover defunct Science Festival activities.

That’s a grand total of two items that could be actual highlights. Is there any limit to the obfuscation around festival activities and failed entrepreneurial activities by this inept government?

In my mind that is an improved line up.

Why are they even bothering? What The Renovators was to television, Enlighten is to festivals. Expensive and unpopular. The only people looking forward to it are the accountants at the gay newspapers in Sydney, Melbourne and Brisbane which carried heaps of advertising for this year’s failed festival.

In my mind that is an improved line up.

Another flop in the making.

Good of them to check their calendars to make sure there were no clashes with other major ACT government funded music festival initiatives targeting exactly the same demographic.

Jack Wiles - 13 hours ago
It's not the type of meeting place depicted by so many comments; it's not somewhere you would take young family but is a plac... View
News 15

Marea Fatseas - 17 hours ago
Essentially, 80 percent will still go to landfill under this proposal, which is not a great outcome. View
Capital Retro - 1 day ago
Are you suggesting that while there would be difficulty getting permission in locating and establishing another landfill in C... View
simm - 1 day ago
It is really just a Waste Tipping Hub (TIP) proposed in the wrong location ... that being a populated built up area on a cong... View
Opinion 2

MERC600 - 17 hours ago
Tim I fear your saying 'The most obvious is the economic downturn created by COVID-19' will prevail. Also this Covid bug econ... View
News 64

David Brown - 17 hours ago
Will he still be a candidate? Just not an endorsed Lib? View
Guy Manton - 20 hours ago
Andrew Duncan there was a debate, theres been thousands of ongoing debates about these kinds of issues. Canberra doesn't supp... View
Andrew Brien - 2 days ago
Canberra Liberals at their best. Apparently one was claiming get on Sportsbet they have great odds of the Liberal Party to Wi... View
News 25

David Brown - 17 hours ago
Baaa wants to sell off our foreshores to his developer mates. 😟 View
Julie Macklin - 22 hours ago
George Watling I live in the south, but the light rail is a useful way to get to Gungahlin after catching a bus to Civic. I h... View
Julie Macklin - 22 hours ago
Amanda Evans That's why I wrote, "with hopefully enough handicapped parking for those who really need it." I sometimes have a... View
Breaking 2

Acton - 18 hours ago
Who would have ever believed that Australians could treat each other in such a way. What happened to mateship in adversity? T... View
News 25

Capital Retro - 1 day ago
CSC, this is a brilliant initative. View
chewy14 - 1 day ago
Capital Retro, Your link doesn't say what you think it does. Firstly, your link is about an audit and it specifically says th... View
Capital Retro - 2 days ago
Data on page 68 of this audit would appear to be at odds with what your colleague concluded: https://www.veolia.com/anz/sites... View
News 14

Capital Retro - 1 day ago
When was the last infection of COVID 19 logged in Canberra? Compared to the rest of the world the pandemic is over in Canberr... View
HiddenDragon - 2 days ago
Even if these figures are a little rubbery right now, with the federal budget being delivered 11 days before ACT election day... View
Lifestyle 13

Canberrans with valid travel permits have been stranded at the Victorian border after NSW authorities changed their access requirements at...
News 77

Chief Minister Andrew Barr has poured cold water on the possibility of a new football stadium being constructed in the...
News 39

@The_RiotACT @The_RiotACT
Cav's pitcher Frank Gailey was surprised at the outpouring of support when his wife was seriously injured in a car crash on the Kings Highway. Now he's repaying the favour to the next generation https://t.co/zPPygxFD0S (20 minutes ago)

@The_RiotACT @The_RiotACT
Last year 170 swimmers dropped their daks and took to Lake Burley Griffin to raise money for Lifeline. This year, COVID-19 meant just two could swim, but there was barely a dry eye on the shore as the swimmers entered the water https://t.co/xR2Ueh7UEX (2 hours ago)

@The_RiotACT @The_RiotACT
Our latest #GigGuide brings you the best local music on offer in the coming week, headlined by Signs & Symbols, who will be on stage this weekend https://t.co/uVdPG8zJTn (11 hours ago)