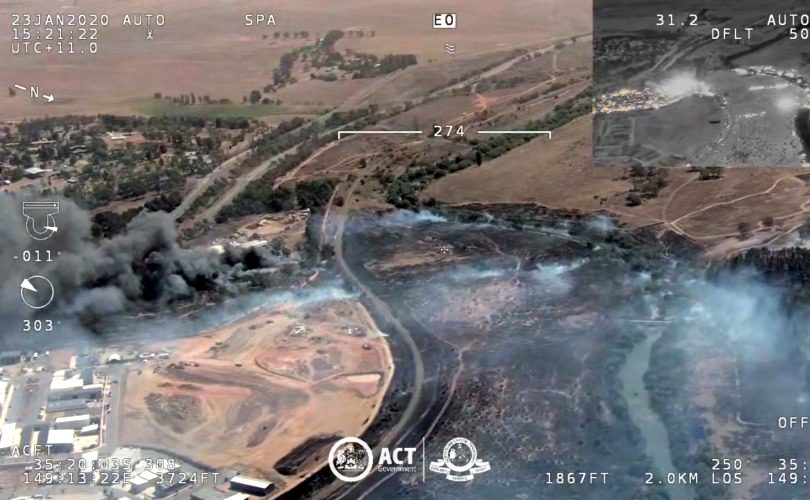 No homes were lost in yesterday’s (23 January) fire around Canberra Airport on what Chief Minister Andrew Barr and Emergency Services chief Georgeina Whelan called an extraordinary day for the ACT .

Rapid Damage Assessment Teams deployed today found 20 out buildings and three vehicles damaged on the fire ground, which is being patrolled by ESA and NSW RFS crews. The fire is now at Advice level and is being controlled within containment lines.

Commissioner Whelan said crews would continue to patrol the fire ground and extinguish hot spots as the ESA braced for another round of ”dangerous” hot weather next week, saying the ACT could be in a Total Fire Ban from Tuesday.

The Bureau of Metorolology is forecasting temperatures in the mid to high 30s next week, with little rain on the horizon.

Commissioner Whelan said the ESA and RFS threw 47 crews into the battle, along with four aerial appliances and three Australian Defence Force aircraft patrolling. Large air tankers could have been called upon if required, before the fatal crash of the C-130 yesterday afternoon.

“It was chaotic yesterday but it was controlled chaos,” Commissioner Whelan said, praising her team. “We contained that fire, we stopped that fire from destroying homes.”

She said the ESA would utilise the break in the weather get on top of the fire and rest exhausted crews over the weekend.

Although rain overnight had cooled the fire ground, it also brought lightning and the ESA had conducted a line scan of the ACT to search for any ignitions.

The fire also engulfed the recycling centre at Underwood Street, Beard, spewing clouds of toxic smoke into the air but the ESA said atmospheric monitoring conducted this morning showed no hazardous levels of air quality in Beard, Oaks Estate or Uriarra Road.

It is still burning but air quality is currently at a safe level for people in these areas but the ESA has asked the community to avoid areas surrounding the recycling centre if you don’t need to be there.

All roads are now open but the ESA urged motorists to take care as emergency service vehicles and personnel are working in the area.

A section of the fire was sparked by power lines brought down in Pialligo by the high winds and outages are still occurring in surrounding areas.

Evoenergy says Pialligo, Oaks Estate and Beard, among other areas across the ACT, had been impacted and crews are working to restore power.

“Our network has been damaged in the Pialligo area as a result of the Beard fire. We are in the process of repairing the damage so we can restore power to the affected area,” a spokesperson said.

Two main lines that service the Fyshwick area have also been damaged. Evoenergy is asking Fyshwick businesses to reduce their electricity use to help it manage the power load on the network.

The fire broke into Brindabella Business Park, with some trees igniting, and half the site is without power.

Canberra Airport’s Richard Snow said there had been spot fires in the southern part of the Park and nearby areas but staff and ESA crews had quickly put them out.

There was no damage to infrastructure, just a couple of garden beds, and weeks of preparation had paid off with lots of capability across the site, he said.

Workers at affected businesses in the Park were told to stay home today.

The Airport itself was back to normal operations, with flights arriving and departing as usual. Virgin had increased the size of its planes to clear the backlog of travellers from yesterday’s disruption.

Meanwhile, tech giant Amazon has apologised after an error caused the ESA website which it hosts to crash on Thursday afternoon.

Mr Barr says the ACT Government will look into how to improve reliability of the site.

The fire really makes the size of this summer’s disaster unimaginable. Just this small fire has kept crews busy, and Canberra and Queanbeyan anxious for days… and it is this times a thousand across the eastern coast.
What an appalling summer it has been.

There needs to be a driver video made to advise what to do when emergency vehicles have their lights on behind you in traffic. People just panicked a drove all over the place!

I really feel for anyone who has being a victim of those devastating fires and unpredictable weather fury and of cause, for all the firefighters that are in the thick of danger and all organisers. However, to see charity organisation like the Red Cross, is totally disgusting.

But, I will be even more disgusted if I get to see corporate greedy or, any other organisations, including foreign investment; that will start building holiday resorts and units etc. all around the coast Line and historical towns..
Especially, when some of those hypocrites are the ones that are telling us that Australia is not doing enough to reduce climate change risks…ill be waiting to see!!

Daniel Duncan read the report as to where it started

Carol McHarry, the article explains the Pialligo fire but not the Redwoods