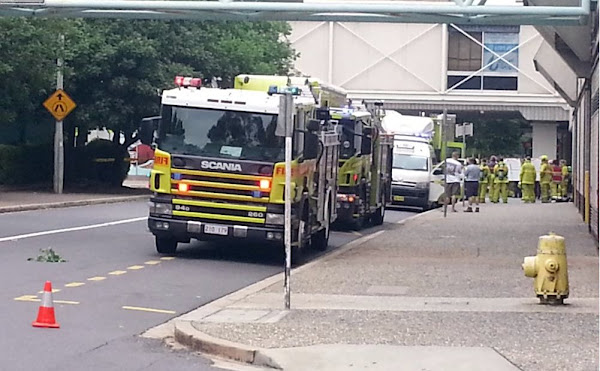 The cordon is in a small area between the McDonalds entrance to Woden Plaza and shops across the road.

Firefighters from the ACTF&R HAZMAT crew are currently conducting atmospheric monitoring in the area as a precaution before lifting the cordon.

ACT Ambulance Service intensive care paramedics have treated man and woman on scene. They are now being transported to The Canberra Hospital in a stable condition for further assessment.

The ACT Ambulance Service has transported a further four people to The Canberra Hospital for observation.

This is purely as a precaution as they were in the area at the same time as the man and woman who collapsed.

An initial investigation by firefighters indicated a faulty boiler may have released carbon monoxide into the air conditioning system in the building opposite the plaza entrance.

The ACTF&R HAZMAT crew have completed ventilation of the building and atmospheric monitoring and declared the area safe.

The Mad Gasser of Mattoon!

Be afraid, be very afraid!

I use to just about hold my breath running for the door to David Jones whenever my husband insisted on parking in the car park overlooking that cleaner, in fact it was probably a big influence on me not going to Woden so much and never in busy times when the car park on the other side was likelier to be full. While the carbon monoxide on this occasion is a seperate issue to the regular solvent fumes I’m not surprised the problem was found to have been there.

Yep, it was Mr Green, in the library, with the candlestick…. err…. dodgy maintenance, in the dry cleaner’s, with the carbon monoxide… 😉

And the Canberra Times article was slightly inaccurate. 7 patients were seen at TCH, not 6.

I was there yesterday shopping when it all started. It was a huge deal. First the Ambo’s turned up and started treating a woman who was unconscious and dragged her out of the shop. minutes later another Ambulance sedan turned up to help within minutes another person in the shop dropped and looked like they were having a seizure. the Ambo’s dragged them out too and I think a female Ambo got sick because of the gas. They started clearing all the people out and shut down the area before the Firies arrived.. full on. couldn’t believe people were ignoring them and trying to get through the area. as if they didn’t have enough to do

Canberra Times now reporting it was the dry cleaners in Bonner House, which was my first suspicion yesterday. Faulty boiler in their premises. Not at all surprised, walking past it before Christmas, the place looked like a hazard….

Canberra Times now reporting it was the dry cleaners in Bonner House, which was my first suspicion yesterday. Faulty boiler in their premises. Not at all surprised, walking past it before Christmas, the place looked like a hazard.

I was heading north on Hindmarsh as the HAZMAT truck tried to get through the Yamba Drive intersection when the light just turned red. Two buzz boxes in the second and third lane blocked the truck who was in the third lane. One driven by a Baby Boomer male (in the third lane) could have moved into the front of the turning right lane (and therefore had a slightly longer journey than otherwise) and one driven by a GenY female, in the second lane, who could have turned across in front of the third lane and mounted the median strip (and worked out later how to get back into traffic). Neither did however, and held the truck up for over a minute. When the lights changed, both accelerated and made no move to get out of the HAZMAT truck’s way – despite my stream of abuse as they sailed by.

All boilers release it, I’ll wait for Workcover to do their thing before taking it as conclusive.

It could happen pretty easily if there was a partially obstructed air intake or somesuch thing.

All boilers release it, I’ll wait for Workcover to do their thing before taking it as conclusive.

Interesting – gas cooktops and car exhaust are possible sources, but a wood fire puts out far higher concentrations than either of those. Do they still use a wood-fire at the restaurant in Bonner House that used to be APK?

Did someone try and use a dodgy gas stove they bought from Cash Converters?

Lots of fireys as well as copiers.

That should make their paper work easier.

Anyway, doubt it would be gas. At concentrations high enough to do this, you could smell the chemical they add to it to make it noticeable.

I would be more sue about the dry cleaner on that corner who has an exhaust vent blowing onto that intersection. They work with some nasty stuff.

Just sent a pic to the email addy. Nothing great but couldn’t get too close. Lots of fireys as well as copiers.

Had they all eaten at the restaurant recently?

Irene Elford - 49 minutes ago
Why is all I can say, if and when they defrost you all your family friends, etc will be gone. View
Katy Did - 1 hour ago
Rachael Axford for these two I reckon😂 View
Phil Andrews - 3 hours ago
I have a bridge for sale if they’re interested!! View
Opinion 178

Rowan Hartcher - 1 hour ago
Alan Hopkins like wise View
Peter Quinn - 2 hours ago
So when can we celebrate colonisation????. Whatever day is nominated it will always be contested View
Alan Hopkins - 2 hours ago
its not that hard to change the day. just do it... View
Opinion 24

@The_RiotACT @The_RiotACT
Can you see yourself relaxing on the deck of this lovely Lilli Pilli home? The stunning elevated property offers the perfect opportunity to kick back & enjoy life https://t.co/exzSAWdrIG (38 minutes ago)