Gazza heads to the barricades over ASIO Battlestar 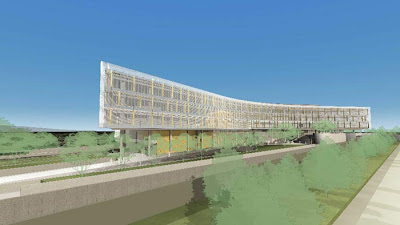 The ABC brings word that the Liberal Senator Gary Humphries is taking up cudgels on behalf of hysterical Campbell residents upset about the vast new facility ASIO is building itself at the end of Anzac Parade.

Senator Humphries says he is not sure it is the right building for an area which planners hope will become a grand boulevard.

“I think with these setbacks that we’re looking at with this ASIO headquarters I just can’t see that this is going to be compatible with the concept of that was designed by Burley Griffin and which has recently been reinforced with the Griffith Legacy concept which has been affirmed by the NCA,” he said.

National planners have dismissed claims the new headquarters will become a ‘barbed wire city’ in the heart of Canberra.

The spooks have posted lengthy details about their proposed building on their website.

Christ guys I posted the number in Riotact the other day [click] and no one as yet has come along and take………..[muffled sounds]

Well caf that just ensured you an entry in their files!
“What’s that funny clicking sound on our telephone lately?”

You know you have the right number for ASIO when the person answers the phone by sheepishly saying, “Hello…” and you can picture beady eyes looking from side to side.

The building looks more like a Basestar than a Battlestar (the former are the aliens’ ships and the latter the humans’).

not the number i had.

The building looks more like a Basestar than a Battlestar (the former are the aliens’ ships and the latter the humans’).

How do you know Skid? They’re not allowed to say who they work for.

a couple of times in the past, I had phoned their “switch” and a newbie has answered – usually with the department name and a quiet “aaargh” in the background. suffice to say, the newbie isn’t there next time I called.

Dont ask me for the number now, I don’t have it.

That doesn’t mean nobody knows though.
(And the Canberra paranoid-for-work-purposes community is a pretty small world)

Just facebook search ASIO and see how many names come up, SPYS!!! all of them.

How do you know Skid? They’re not allowed to say who they work for.

PS: I don’t hate all ASIO staff, some of them are nice people.

Political grandstanding from Gazza here, too late I am thinking, its being built.

Do we seriously think the design for this building started less than a year ago? That it DIDN’T start when Gary himself was in Government?

Grandstanding? +1
Too late? +1 (deliberately methinks – be seen to be doing something while knowlingly not going to impact it)

The alternative is to admit that he had no idea what was going on around him, despite numerous mentions in local media.

Seeing the way you all feel about ASIO, I wouldn’t tell you if I did work there. Or do i?

Incompetence is merely a cover-up for the colossal consipiracy.

Believe in conspiracy? God no.
“Any investigable event with Government involvement which may be explained by either incompetence or conspiracy, colossal incompetence will almost always be the most correct explanation.” was something I was taught way back in Russian history studies.

I have never applied, and have no reason nor inclination to apply.
We just had a few people here who were recruited into mystery ‘Attorney Generals Department’ roles after their last recruitment round, who were completely unable keep where they were going a secret.
We were happy to see them gone, but their standard of graduate intake seems unimpressive.

Their most recent court case involving a leak to the media involved a judge labelling the accused as having a ‘standard of professional behavioural incompetence’, by the way.
I just believe in justifiable performance rewards, not “We think we are important so deserve an imposing presence on the political landscape”.
Until I hear a good reason to sing their praises (instead of the usual grumbled mutterings) from people who work with them, I’ll stick with their repuation for being the Legion of Incompetents.

Political grandstanding from Gazza here, too late I am thinking, its being built.

There is no such thing as a TS Classification building, TS is a data classification. (couldnt help myself)

Cant enter the building unescorted unless you are TS or above then I would say that yes, the building is classified.

The building would be certified to ASIO T4 spec or as an “Intruder Resistant” or “Secure Area”. TOP-SECRET is a classification that is given to data with a value of TOP-SECRET. Buildings or areas do not get rated to a data classification (eg you dont have a “IN-CONFIDENCE” building). Ask your local ASA for a copy of the PSM if you want more info 🙂

+1, this was my earlier point above. Just because a clearance level is needed to enter an area does not mean this area is rated to that level.

I would have thought a Maxwell Smart sort of entrance in civic or somewhere lese nondescript.

Ha Ha Skidbladnir sour grapes you’re rejected by them, or are you a One Nation type Conspiracy theorist.

Just been on the CT website and noticed that ASIO are advertising for intellegence analysts. It’s worth a look (but don’t tell anyone)

With the staff wearing hijab?