We know Canberra like
our own backyard, because it is
Get the home advantage
28 June 2020 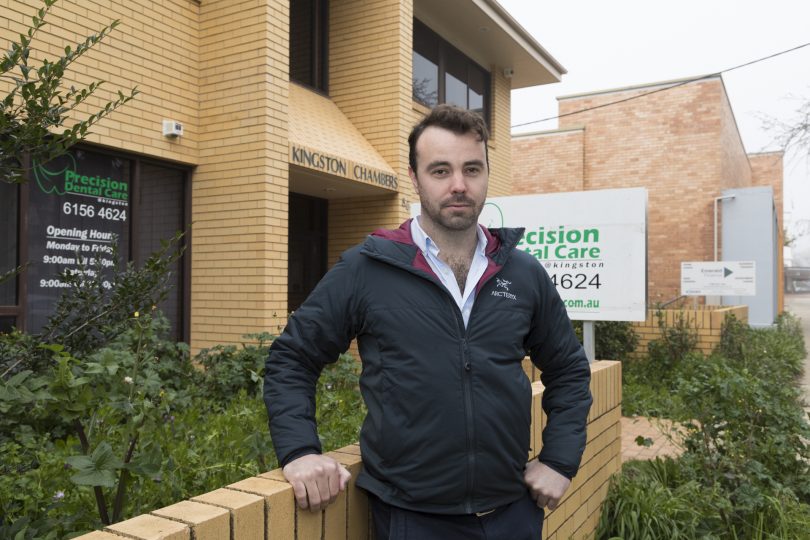 Sam Graves at the site of the proposed development. Both buildings pictured will be demolished to make way for a six to eight-storey apartment block. Photo: Michelle Kroll.

Residents who live near the site of Geocon’s proposed six to eight-storey apartment block in Kingston fear it will destroy the village feel of the neighbourhood and pave the way for more high-density development in the suburb.

Sam Graves, who lives in the three-storey townhouse complex next door to the site, says the 30 or so residents nearby are alarmed by the height, scale and density of the proposal which they believe is completely out of character with old Kingston.

”Kingston is two separate areas. The Foreshore which is new, vibrant and dense and meant to be busy, and that’s great, it works well. Then you’ve got old Kingston which is very much more that village feel, the treescape is beautiful, it’s Green Square, it’s green space, lower density, and that’s why people move to the area. They like that feel. Ultimately you’d be taking away from why they moved there in the first place,” Mr Graves said.

Geocon plans 106 apartments and four ground-floor commercial tenancies for the nearly 2000 square metre site next to the old post office.

A key feature is a pedestrian laneway through the complex and internal void which the plans say will provide natural light, cross ventilation and community connection. It will also connect to a rear car park which Mr Graves says is a massive concern because Geocon wants to use it as an access way for the development.

”It’s a super important car park for Kingston because parking is just a nightmare And they want to relabel it a laneway. It will make parking in there almost impossible,” he said.

Geocon argues the proposal’s size is within the context of Kingston, pointing to other multi-storey developments such as nearby Atria, and the older Kingston Tower and The Carrington.

It says the proposal is within the planning rules, which allow taller buildings than the two-storey limit ”if compatible with the desired character, appropriate to the sale and function of the use, and minimise detrimental impacts, including overshadowing and excessive scale”.

Geocon says the proposal is not out of character and neighbouring residences would not be affected by overshadowing.

But Mr Graves said all the older towers were built under different planning regimes and Kingston Tower sites used about a fifth of the block, ”whereas here they’re talking about zero setbacks on three boundaries, and a very minimal setback on another”.

”You can go high but you shouldn’t be able to max out every corner of the block,” he said.

Nearby traders appear to support the Geocon proposal, saying it will be good for business. Caribou pub owner Leroy told the ABC that Kingston needs a facelift and more high-density developments.

Mr Graves can understand why they would like more customers but warned that if the traffic and parking situation isn’t solved they could have a bigger problem than they have already.

He is concerned that Geocon’s pre-DA consultation was inadequate and that many people in Kingston do not have a clue what’s going on.

But Mr Graves believes the situation also has ramifications for the wider public.

”There is a reason planning rules exist, they’re there to protect neighbourhoods and communities they’re not there to be the playthings of developers,” he said.

A development application is expected in July.

Kingston was a friendly safe place to live.Now all grog and selfies.

The private polling for October must be truly dire –

The argument about Kingston Towers and the Carrington shows that Geocon has no idea about the Territory Plan (or is ignoring it). Those towers were built before self-government when a completely different planning regime was in place. A third tower was refused in 1993 and a height limit of 3-4 storeys imposed. The current Territory Plan is for 2 storeys on the Geocon blocks unless the development maintains the desired character of old Kingston. Eight storeys is way out of range.

Kingston has always had the ‘village feel’! Like Manuka but what sets it apart is its character, walking square with smaller shops with the exception of Winning Appliances store.
The new proposal doesn’t address the potential walking path from Old Kingston to new Kingston on street level, could be more to look at?? The 8 storey building set backs are confronting, no real address for landscaping like across the road from it. Laneway access isn’t really resolved and noise levels would skyrocket for neighbours with the amount of people. One beddy units not great at 50msq. If only buildings built with community and ‘city beautiful’ in mind replaced the run down ones – would be ideal??

Old Kingston is boring. Out with the old, in with the new.

Yds but old Kingston is like a rich people only suburb….no house is cheap and i believe all Australians can live wherever they want to be

Yay! Another Geocon eyesore….Parking is already a nightmare in Kingston. The housing market doesn’t need more 1 bed flats. The ”missing middle” 2 – 3 bedroom townhouses are whats needed in Canberra – but these don’t make as much profit for developers like Geocon. 😞

Victoria Edmonds …..EXACTLY !! Plus too many units deflate the value of existing ones …1 bed apartments are a bad investment.

Is there anything left of “old” Kingston? It’s now mostly filled with apartment blocks and nothing like it used to be. Sad really as that was the appeal of the suburb.

Sue Ellen since more people live there now, that really disproves your opinion that it’s oldness was the appeal 🤨 the new buildings have plenty of appeal, we know that cause they’ve got people living in them 🤦🏼‍♀️

Village? 😂😂😂 I love going to Kingston for a coffee on occasion thanks to a great mate, but village is a stretch! So far past that already! And i bet the one’s complaining weren’t complaining when their penthouse was being built!

Why don’t they go and build it in Charnwood??

Cause the building would get stolen n charnie

Charles Godworth come on mate!! Charnwood is an up and coming suburb

Time to upgrade with the times

I like the proposal however feel it would be better with less one bedroom apartments and some 3 or 4 bedroom ones incorporated.

Andrea Kerr
I think the proposal is terrible, far too high and next to a heritage building.

Sharon Hunter then best you lodge an objection when able. I provided feedback to the developer about the height and mix of units. If you feel strongly then put it in writing.
I am not sure why it matters if it is next to a heritage site as long as they don’t damage it.

Kingston hasn’t felt like a village in over 10 years, this is just mindless opposition.🤦🏼‍♀️

Rubbish. There is already a 14 story joint there. If the greensquare and shop precinct wants to compete with the foreshore, it needs to evolve. Days of the rocking night life are well gone. So many businesses turning over – over a number of years. Leaving it looking ‘old’ will not help.

Stuart Roesler the foreshore is horrible

Sher Young I think it is wonderful. To each their own.

Stuart Roesler
Does it need to compete?
2 different style are a good thing I think.

Sharon Hunter very true. But the shops are a shadow of Thier former self. One part greedy expensive landlords one part foreshore 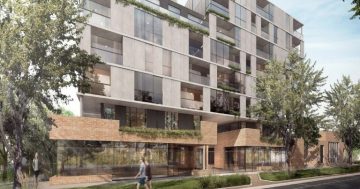