Chief Minister Andrew Barr has stepped into the row over Geocon’s plans to build a six to eight-storey apartment building in old Kingston, saying the proposal goes too far and is not the right fit for the suburb.

Mr Barr’s unusual intervention comes as the pre-DA consultation for the Giles Street proposal enters its final week and a public meeting is being organised for Wednesday night (15 July).

It is also seeking to use the rear car park and laneway as an access point, as well as creating a pedestrian laneway through the site from Giles Street to Eyre Street.

Nearby residents are alarmed at the scale of the project and also its impact on parking in the area.

Mr Barr, who is also a local MLA, detailed his concerns about the project in an email to the Kingston Barton Residents Group, which had invited him to the public meeting.

Although he declined the invitation, Mr Barr surprised the group by taking Geocon to task for proposing a development of this size in that location and calling on the developer to change its plans.

”I consider the proposal released does not fit with the form and amenity of the surrounding neighbourhood,” he said.

”The proposed height of the building could overshadow important communal areas, existing residences, and walking and cycling routes.

”While the Government supports residential changes that increase local economic activity and support the viability of local business, this proposal goes too far and does not meet the equally important goal of protecting what makes Kingston a special place to live and visit.”

Mr Barr said Geocon should amend the proposal and re-release it for a further round of community feedback before formally submitting a development application for the site.

The Chief Minister said that he could comment on the proposal because it had not formally been lodged with the planning authority but coming after his call for Doma Group to conduct an Indigenous heritage review of its Foothills site in Campbell, the comments signal a more activist stance and an acknowledgment of community concerns about developer overreach in Canberra, particularly with an election looming. 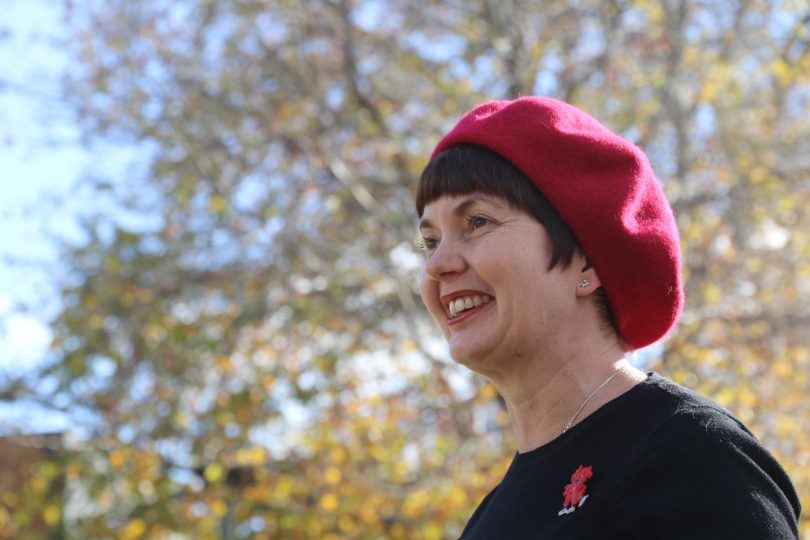 Rebecca Scouller: the proposal is the thin edge of the wedge for Kingston. Photo: Dominic Giannini.

She said the proposal would have planning ramifications across Canberra and would be the thin edge of the wedge in Kingston.

”This proposal puts a sledgehammer to the planning rules and, if approved, will have significant impacts on the residents of Howitt and Giles Street, and potentially impact the viability of many local businesses,” she said.

”It would also set a towering precedent for the Kingston Group Centre for future planned development sites.”

She warned that if Geocon was allowed to build close to four times the allowable plot, the planning rules were meaningless.

”We welcome developments that will support the Centre’s viability; however, we are cautious of any that compromise this by reducing parking and access to traders,” Ms Scouller said.

”This proposal is the thin edge of the wedge for Group Centres and smaller local centres if developers are allowed to chase loopholes in ACT planning rules to develop out of character developments.”

The community would welcome the opportunity to sit down with Geocon to discuss a re-released proposal as suggested by the Chief Minister, she said.

Ms Scouller said Wednesday’s in-person meeting was being organised at the community’s request and the numbers were being capped in line with COVID-19 guidance.

The meeting at the Baptist Church in Currie Crescent will include speakers from local business, the National Trust, a planning expert, and local residents, with presentations limited to 10 minutes.

The group is actively monitoring COVID-19 updates and will have a COVID-safe plan in place.

Purdon Planning, representing Geocon, has declined an invitation, saying it had concerns about the format and would prefer to include its entire Project Team in any presentation.

Ms Scouller said Purdon implied that the COVID-19 restricted numbers meant the meeting would not hear ‘varied perspectives from a wide sample’ of the community.

”We note that our cap of 40 (with a waitlist), is equal to, if not greater participation, than Purdon Planning’s Pre-DA consultation in June. That meeting was intended to be their only Pre-DA consultation until there was strong opposition to the proposal,” she said.

”Noting this a community-led meeting to hear from several experts and impacted parties, we are disappointed that a professional planning firm considers they cannot present their proposal to an audience in 5-10 minutes and answer audience questions in a Q & A session.”

When are Australian architects going to learn something about external aesthetics ?…must be the dullest bunch of doodlers on the planet.

Hi Fred, the Labor Party does not accept donations from property developers

There must be an election coming up!

I suppose the usual “donation” from Geocon will be smaller this year.

If you voted labour last election you should just accept their decisions.

You would think, that if the approval commitee were doing their job, that it would be the shortest meeting in their history.
“Hello, Mr Geocon. I see you have some plans for a new development in Kingston. Hmm, it appears that your development doesn’t even come close to meeting the planning requirements for this area. Please come back when they do. Meeting is now closed, thank you everyone.”

And Geocon is going too far in Woden also when they build “Wova” on the old tradies site 24 , 16 ,12 & 10 stories Across the road from beautiful Bellerive taking all the sun and views from this lovely retirement village !! Well you could say Burnie court is just moving over the road !!!

So in Gungahlin it is ok to build massive residential slum towers but god help you if you build an 8 story apartment complex in Kingston !

Too far? After the mess that has already been made of this city on his watch. Geocon must have withdrawn their Melbourne job offer …

Barr’s track record is always taking the side of developers over the community. With an election coming up he makes a token gesture, but the community is smart enough to see through this hypocrisy. Once the formality of an election is over Barr will resume his cosy relationship with property developer mates.

Wait till the site of the Railway Station is rezoned and developed. Will there be any ministerial moderation post election?

Must be an election year

So when they bought up historic pre-1940’s homes in the region of Kingston in the recent past and tore them down, that was ‘ok’ but now they plan a proposal that doesn’t take out any of the historic homes in the area but is a little taller than usual, it’s some terrible crime against the heritage character of the area? Last I checked, the best way to protect the heritage character of an area is by protecting the heritage and worrying about nonsense like height later, ONLY if a proposal gets past the first part (that is: “Does it tear down actual historic buildings?”)

There’s several buildings taller than this in Kingston.

We shouldn’t freeze Canberra as it was in the 1970s.

We need developments like this to provide affordable housing for ordinary people, not just Deputy Secretaries.

How about the Tuggeranong one as well?

Vanessa Jones you mean the town centre? In which case that’s the place for them.

Vanessa Jones , do safe Labor zones get 26 storey buildings where nothing else is over four storeys and the adjacent buildings are only three?

I wish that there were fewer tall buildings everywhere. Woden is becoming even more of a mess and Lake Tuggeranong southern foreshores are a disaster.

Must be an election coming up, for Barr to make comment on this is extraordinary. Particularly as he constantly berates and patronises the community on building heights.

Clinton Berry. Mr Barr said this to the uninformed backwards Canberrans ‘You [can] go anywhere else in the world and they would laugh at you if you said a 12 storey building was high rise.

“Even a 20 storey building is not high rise and yet we are stuck here in this sort of small-town, backwards, 1940s mindset and we need to move beyond that.”. Mr Barr confuses high rise with skyscrapers but hey we forgive him for that!

Good. The proposed building is way too tall for an area that only has a max of three storey in the block and four nearby, and will just put heaps of shade over the Kingston shops, especially Green Square in winter. The graphic also doesn’t look right; the block looks much narrower than that.

How does this differ from the monstrosities in Gungahlin (apart from being significantly smaller)? I didn’t hear or see Mr Barr take Geocon to task on those.

Maybe a bit of self-interest????