Get thee down to the suicide line, there’s roller derby all weekend! 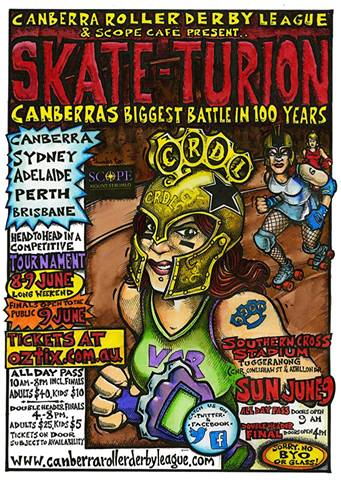 The Canberra Roller Derby League has the exciting news that teams from around Australia are converging on Canberra for a Centenary bout!

As Canberra celebrates its centenary year, SKATE-TURION is about to hit the Nation’s Capital during the June long weekend. To celebrate the centenary Canberra Roller Derby League (CRDL), in conjunction with Scope Mount Stromlo, will be hosting a roller derby tournament at Tuggeranong Southern Cross Stadium. Billed as Canberra’s biggest battle in 100 years, top teams will be converging from Sydney, Adelaide, Perth and Brisbane, the competition will be fierce.

The tournament structure itself sets a precedent for roller derby in Canberra. The 2-day event will see 12 teams compete against each other across 3 divisions. Closed heats run on Saturday 8th will establish which teams will progress through to the finals on Sunday. Tickets for all finals on Sunday 9th will be available to the public.

Derby fans new and old can come to Southern Cross Stadium and see for themselves some of Australia’s best skaters take to the track.

3 Responses to Get thee down to the suicide line, there’s roller derby all weekend!
Filter
Showing only Website comments

Or your red and grey for canberrs other residenteial league! Varsity Derby Leagues Dishonour Rollers!

If you’ve never seen roller derby then get along. It’s gear…..

Part of the fun of derby spectating is dressing up. You want to be wearing lime green, purple, and black to support the Vice City Rollers. Think “Raiders jersey after a disco spewed on it” and you’ll fit in just fine.

Lillie Rudland - 2 hours ago
David Rudland just say when! View
Jody Kisbee - 6 hours ago
Sounds like a plan View
Jodie Roberts - 7 hours ago
Julia McFarlane what are you two up to this weekend? This looks lovely View
Opinion 34

Matt Henry - 6 hours ago
Allison Jay if she says that then u could only blame boring parenting. Canberra is a great place to bring up kids ans live. View
Allison Jay - 1 day ago
Kat Rothwell haha yes indeed View
Sport 5

Border_Libran - 10 hours ago
Hi A_Cog, I’ve just found your comment, if you still reside at Oaks Estate I would be interested in contacting you, I was p... View
Breaking 1

Capital Retro - 10 hours ago
How unlucky is this dude? I mean, it's hard to even spot a police car in Canberra let alone hit one. View
Property 15

Harley Quinn - 11 hours ago
Canberra has NEVER been a peaceful city. I was kidnapped in 1993. It's nice that some people still have that illusion though. View
Business 18

Bob Jones - 18 hours ago
Deb Wheare And Lynne Meredith... I've heard because of the more right someone who identifys as being an Aboriginal or Torres... View
Kev Martin - 1 day ago
I find If you stop breaking the law, you don't get locked up View
Deb Wheare - 2 days ago
Jacob Torresan face palm View
Community 12

@The_RiotACT @The_RiotACT
Stories about Summernats, snakes, Skywhale & a new venture from the team behind Bombolini doughnuts all featured among the top stories on the RiotACT this week. Catch up with our latest newsletter https://t.co/4JyEruj9tg (5 hours ago)

@The_RiotACT @The_RiotACT
Eleven years after he was first drafted into the AFL while still at Erindale College, Jason Tutt is returning home to Ainslie Football Club https://t.co/0D5tHBFya1 (6 hours ago)

@The_RiotACT @The_RiotACT
This remarkable seafront complex for sale near Narooma is your chance to purchase a unique residence with optional tourism business opportunity https://t.co/Fze10GhLLY (7 hours ago)