Negotiating the housing data can be a confusing experience for property watchers.

Real estate has become the great Australian obsession, whether you are in the market or hoping to be, and it’s very much a numbers game.

And with the current ‘correction’ under way, especially in the big markets of Sydney and Melbourne, every change in the data is being trawled over and interpreted like the entrails at the ancient oracles.

But for the average punter, it can all be a bit confusing when the numbers differ, especially here in Canberra where the market remains resilient, percentages can be statistically diabolical in the city’s smaller sample and the ebb and flow of big developments can sway the data.

For example, this week’s Australian Bureau of Statistics figures for the March quarter showed a 1 per cent fall in ACT home prices, perhaps putting a chill through homeowners but giving a gleam of hope to those in the hunt.

But data provider CoreLogic, one of the most reliable and credible sources, reported at the end of May a negligible 0.2 per cent fall for the month, the first ‘dip’ in a long time for Canberra where home prices have held up while the previously booming Sydney and Melbourne markets were tumbling from their record highs.

Domain reported in late April a 2 per cent year year-on-year fall, the first time since 2012 that house prices had dropped, and the steepest annual fall in a decade, adding further to the confusion.

So is Canberra succumbing? Does the ABS picture of $5000 being wiped off the ACT’s median home price, or $300 million off the total value of property hold true?

Well, it all depends on how you look at it, the data providers you choose to use, what is actually being measured and how. And the real estate industry itself also has its own indicators that will vary from the number crunchers.

Chief Experience Officer at Dexar Group, John Minns says things like the number of days on the market are a pretty good indicator of how the market is going, and for agents that’s the time the property is available for sale to the time when someone has actually paid a deposit.

Other factors include the season, supply, inquiry rates and open home visitors, particularly after big events such as the recent election, in which property issues played a big part.

“Quarterly numbers do tend to show quite often a trend that is probably been relatively apparent to the industry, certainly the annual figures and the rolling annual figures are of interest to everybody, because they’re great to look at trends that are happening and you usually identify moments that had an impact, be they election campaigns or interest rate changes,” he said.

The numbers can add up to that precious commodity, confidence, or the opposite.

“If people feel like the value of their property is going up even though they have no more cash in their pocket than they had yesterday they’re more likely to go out and spend, at least that’s what the economists tell us,” Mr Minns says. 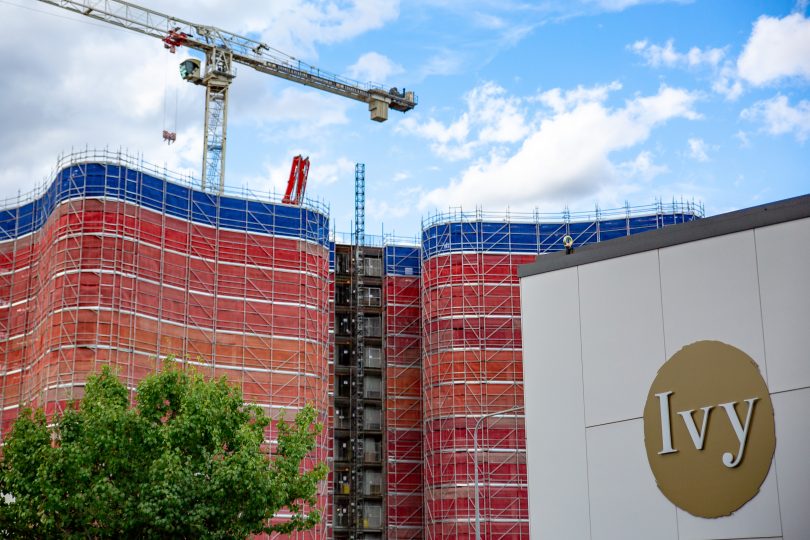 The ebb and flow of major developments such as the Ivy at Woden can also influence the data. File photo.

But the message from the industry and the data providers alike is to look at the long-term trends.

CoreLogic’s Principal Data Scientist Kevin Ward says that the ABS, which also has access to CoreLogic’s data, looks at the sales figures or the 6 per cent of properties that transact every year in Australia.

But CoreLogic also uses data from the Valuers-General to value all 9.7 million homes – houses and units – in Australia, factoring in property characteristics as well as sales results into its Hedonic Home Value Index.

“We look at every single sale in Australia, and we also look at the number of beds, bathrooms, does it have a garage, where it is, is it close to a primary school,” he says. “We work out the value of each of these components and then using that information we essentially value every single property in Australia so the rate of change that you see in the CoreLogic Hedonic Home Value Index is the change in the overall value of the housing stock.”

The monthly and quarterly figures may differ but over the longer term, say 12 months, the numbers tend to match. This week the ABS also reported ACT property prices as flat over the year to 31 March, reflecting the inherent stability of the local market.

“It’s the annual growth numbers that we tend to use for comparison purposes, long term they were 90 per cent correlated with the ABS numbers, on a quarterly basis we’re 70 to 80 per cent, which is still pretty strong,” Mr Ward says. “We don’t tend to look at individual quarterly numbers in isolation. We look at the broader trend over the longer term, and we do find that they do broadly track.”

He says every method used by providers has a certain accuracy to it. The stratified median index used by the ABS is really good for answering questions around what kind of property can the average salary afford, while the Hedonic Index measures the wealth associated with owning property and the change in its value at the time.

The other key difference is the property split – the ABS separates freestanding houses from all other property types, including semi-detached homes and townhouses, while CoreLogic includes these in its houses category, keeping units apart. So comparisons can be a case of apples and oranges.

Some figures will have a lag, which is another factor to take into account. CoreLogic prides itself on the timeliness of its data and being out first in a very competitive market. “Of course that comes with a bit of risk as well so we have to make sure that everything is working properly and through our governance process we have in place we are comfortable that we are doing that,” he says.

So all the numbers have a story to tell, depending on their use and your position in the market.

A market that Mr Minns says remains solid when compared to Sydney or Melbourne, if a little undersupplied, particularly with houses.

But there is more choice, particularly in the inner north and south where developers are offering a diverse mix of apartments and townhouses that target different demographics.

“If we see an uptick in the number of properties on the market with the level of confidence that appears to be around based on the number of people coming through our opens, the fact that people have got through the election, they feel there is a bit of certainty there, they feel they know they can make buying decisions with confidence, if all that stays level and we have a bit of an increase in properties for sale I think it’s going to be a pretty good market over the next 12 months or so in Canberra,” he says.

For the discerning property watcher, it will pay to look beyond the headlines, dip into the data and keep an eye on what is actually happening around you.

Charny Barney - 18 seconds ago
Alistair is loose with his language, and with what he really plans to do. He clearly has ultra conservative positions that un... View
JS9 - 9 minutes ago
They are promos about the election coverage, not campaign ads from the parties... You truly talk some tripe sometimes.... View
JS9 - 16 minutes ago
It ain't a good political ad John unless it terribly produced and utterly cringeworthy lol. View
News 5

Beth Sheargold - 42 minutes ago
Lina Haines I’ll have to see what I can do! View
Lina Haines - 8 hours ago
Beth Sheargold is like a review of Clementine Bakery please! View
Donna Butler - 10 hours ago
Lizzy Edwards and a catch up with meeeeee View
Community 16

Kosher Ayatollah - 50 minutes ago
Robson Rotation is why we need so many corflutes. Candidates are fighting within their own parties for recognition, not the p... View
Business 3

Nicole Vassallo - 8 hours ago
Laura yes exactly!! Lovely family that owns and built this place, and such a stunning home... 😍 View
Laura Peppas - 9 hours ago
Nicole your neighbours? 😱😍... View
show more show less
*Results are based on activity within last 7 days