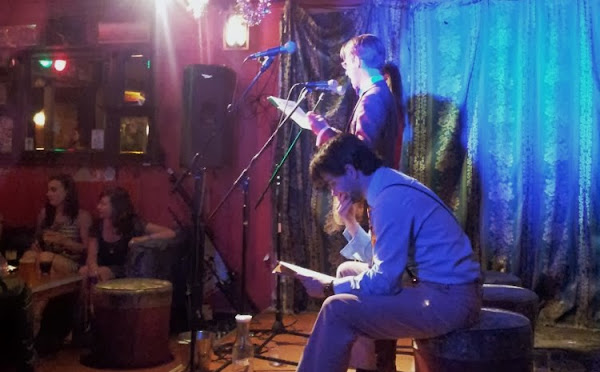 Joel Barcham, the newer moderator of this site, and two friends; another man (whose name totally escapes me, please excuse my idiocy) and Ally (please excuse my probably errant spelling) performed a reading of Dickens’s classic tale A Christmas Carol at the Phoenix tonight. The reading of this story of redemption and self-awareness was quite lovely.

The tale of Scrooge being lead by spirits back through his life and into one possible future where he dies unloved and alone, having rejected everything but money, was an unusual piece for a pub performance. There was a rapt band of listeners in the front of the room, with noisier folk in the rear, but the readers were easily heard and totally poised. The Nameless Young Man read most of the work’s narrative, with Joel and Ally providing the voices of characters. I believe Dickens did all this by himself in solo performances; no wonder his doctors tried to get him to cut back on readings!

Dickens, unconstrained by notions of genre, uses ghosts and time travel in what is both a fable and a work of social realism. Poverty dwelt side by side with wealth in Victorian England, and the voyage into Scrooge’s life touches these wider issues. This abbreviated version of the work contained all the major incidents of the full novella, cleverly emphasising the stark choices facing Scrooge. Will he continue to make his own life into a joyless series of investments? Will he be complicit in the possible early death of his employee’s crippled son? Is paying tax and being a mean and cheerless sod enough to make one a good member of society? The actors/readers brought the choices facing Scrooge – and by extension, all of us – to life through their clever and committed characterisations. This was not a sneering, post-modern deconstruction of Dickens, but an appreciation of the work, vividly realised.

Joel spoke about the wonders of being read to, and how this is something we don’t often experience, past childhood. As a parent, I have had the opportunity to read to my daughter, and to re-engage with the gentleness and fullness of words read out loud; wonderful words, in the case of Dickens. But there is a certain joy in being the child, or the audience, rather than the reader. Thank you to these three very young (to me) word- parents!

Dickens makes it quite clear that the story of Scrooge’s redemption is particularly apt at Christmas. Tiny Tim says that he is pleased that people might see him, a cripple, in church, and think of Christ who cured cripples, which is pretty full on, and borders on the saccharine, if not slopping into the treacle. But Scrooge’s gradual awareness that he was creating hell on earth, and that he has choices to make, is perhaps a more telling message.

The reading was performed to raise money for those suffering the after effects from the typhoon in the Philippines, which is absolutely in the spirit of A Christmas Carol.

He looks pretty clothed in the accompanying photo……

Apparrently that South African fellow is now in an asylum. Not a good place to spend Christmas.

I was a really good performance, much better than many plays, and it’s great that the proceeds went to charity, in the true spirit of the, story well done.

Wonderful review, Poetix.
And a lovely act of kindness for a wonderful cause – nice work, Barcham!

My fellow readers were performance poet Aaron Kirby and actress Alison McGregor for the record.

Thank you for the kind words Poetix, and cheers to everyone who donated. We raised $345 for the Red Cross and had a blast doing so.

If this little story has moved anyone’s heart and made them feel like donating, you can do so here.