Gold and the Incas at the National Gallery. A review

The National Gallery’s new summer show is opening tomorrow and RiotACT was lucky enough to be invited to join the media horde at today’s preview.

This exhibition, really truly is a must see over the coming summer.

It’s full of sex and death and beauty and, of course, gold.

In our mass produced highly machined age you sometimes need to take a step back and appreciate hand made designs with intricately repeated patterns.

On the other hand green shiny hunks of emerald the size of quail eggs speak a language all their own.

Where the European masterpieces often tread over and over the same tropes these works of art come from minds quite alien to us, and therefore bring much prized novelty.

The skeleton clutching its own erect penis is not something Barcham and I will forget in a hurry.

Often at these exhibitions the Gallery has been light on for the history of the civilisations involved, but I think the balance is about right this time.

And oh what gruesome histories.

Brutal hierarchies using the human sacrifice of the lower orders to strike fear in the heart of any who might dissent.

The Gallery has gone spooky for this one. If something hasn’t been spotlit you’re not going to see it (which does result in a certain amount of bumping in to strangers). 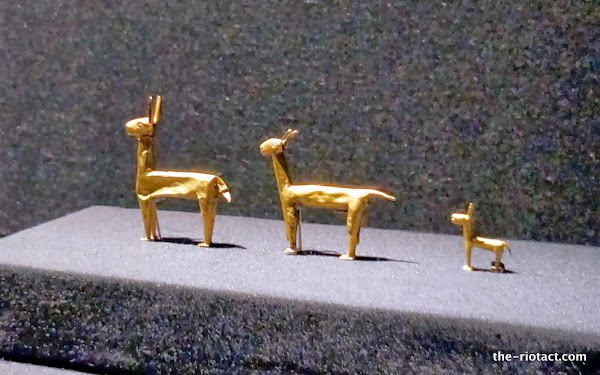 Here’s some of what the Gallery has to say:

Gold and the Incas is the most important survey of Peruvian art ever staged in Australia and will showcase the splendour of the ancient pre-Hispanic cultures of Peru. Audiences will encounter the aesthetic depth, drama and beauty of the famous Incan empire and its predecessors. More than 200 objects, from scintillating gold pieces made to decorate the nobility in life or in death, intricate jewellery, elaborate embroidered and woven cloths to breathtakingly sophisticated ceramic sculptures will be on display.

For more than 2,000 years before the Spanish came to Peru, great cultures rose and fell, were conquered by others or absorbed into them. Almost every artefact that survives was buried with their owners, to be re-discovered in modern times. Gold and silver were plundered by the Conquistadors, sent to Spain and melted down to make coins. But in the last 100 years there have been extraordinary archaeological finds, and much scientific research is occurring today. Sites such as Sipán and Chan Chan, Piura and Lambayeque have their own museums, and have generously lent some of their greatest treasures to the National Gallery of Australia. Many extraordinary objects will be on view which belong to the Larco, Oro and Amano museums in Lima, all founded by Peruvian archaeologists and collectors, while the National Museum of Archaeology, Anthropology and History has a central role in national life.

It’s lovely and dark and cool in this exhibition. If it’s a stinking hot day and the family is driving you nuts this exhibition will, aside from expanding your mind, enriching your soul, be a life saver. 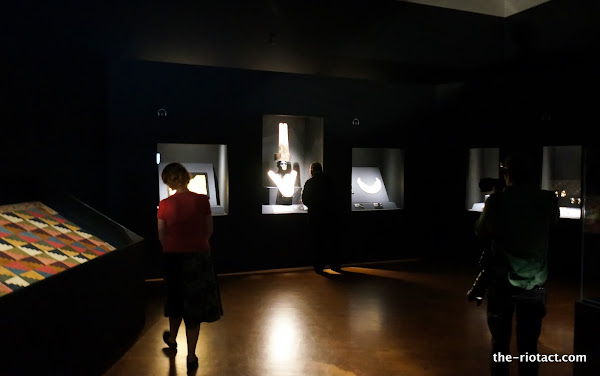 The golden trilogy of target audiences when it comes to these exhibitions are art, history, and culture buffs, and this really has something for all them. I was expecting to see some pretty gold and some old utensils, I was not expecting to spend most of my time marvelling at the almost caricature like representations of people and animals. The art here is unique and beautiful, as well as kind of frightening at points. Very cool stuff.

Whenever we go to these events I always seem to end up playing with the toys in the in the “Family Activity Room” while Johnboy waits patiently for me in the gift-shop, (I’ll let you determine if that says anything about us or our professional relationship) and today was no different. I crawled through a tunnel filled with artefacts, I patted a fake llama, and I played with iPads loaded with software that let you make you own renditions of Inca art and then email the pictures to yourself. Sadly either I mistyped my email address or the app wasn’t yet fully operational because no email awaited me when I got home. So I can’t share with you my majestic, flying, moustachioed, sword wielding man I made, which is a shame because he was pretty darn great.

In short an excellent exhibit with some great activities for the kids.

Also there’s quite a bit of gold if you like that stuff.

For the record the gift shop was unusually awesome, if only because after French tat, and British Tat, Peruvian tat is something out of the ordinary. Pisco bottles and ponchos and Peruvian jewelry . Sadly I couldn’t see any nose rings, but we can’t have everything.

4 Responses to Gold and the Incas at the National Gallery. A review
Filter
Showing only Website comments

Sounds great – thanks for the review.

And for the sake of perspective here’s the view of a visiting German in his early 20s:

The new exhibition at the national gallery is revealing interesting details of the cultures which ruled peru before it was invaded by spain, the displayed items are set in a dark and very well fitting light setup and they also got a area which is especially designed for kids, i enjoyed it and can really recommend visiting it.

I’m surprised there weren’t crotchy-clutchy skeletons as Christmas tree decorations. The gift shop has really let the side down there (-:

This sounds so good.

Rob Quarmby - 8 hours ago
Most I’ve ever seen around my area this year hadn’t seen them for a long time before this... View
Daniel Palmer - 9 hours ago
Minus the fires, has me stumped why. View
The Garden, botanicus perfectus - 12 hours ago
Ann Gottaas View
Lifestyle 16

estelle3724 - 14 hours ago
I would like to ask Ms Castley what more she wants the government to do for business. She never mentions that business receiv... View
News 12

lexyliz - 20 hours ago
Does anyone know what happened with this case? A friend mentioned it yesterday as we are planning to send our son to this cen... View
News 9

Capital Retro - 21 hours ago
The next high impact bushfire that will rip through Canberra will be in about 20 years so there should be plenty of time to r... View
show more show less
*Results are based on activity within last 7 days

Art in the time of COVID-19: Bega gallery offers virtual tour of The Ambassador

@the_riotact @The_RiotACT
Have you been shocked by your latest #electricity bill? One Bonner resident saw her last quarterly #bill soar $1000, and she's not the only one https://t.co/0fib4XxA9r (9 hours ago)