ACT Policing is investigating an incident at the Goldcurves brothel in Fyshwick early this morning (Tuesday, May 8).

About 1.10am police were called to the brothel after a report of a fire at the location. Witnesses saw a person throw a flaming bottle at the front door, causing the front of the building to catch alight. The person then fled in the direction of Newcastle Street.

The building sustained minor damage and police seized a number of items which will undergo forensic examination. No one was injured in the incident.

The offender is described as wearing a grey hooded tracksuit with the hood pulled over his head and a cap.

Police urge anyone who may have witnessed the incident or who may be able to assist with the investigation to contact Crime Stoppers on 1800 333 000, or via www.act.crimestoppers.com.au. Information can be provided anonymously.

A grey hoodie eh? Add a white Commodore and you’ll have your man..

You can’t indict the entire population of Quangers, Charnwood and Dunlop

A grey hoodie eh? Add a white Commodore and you’ll have your man..

That, or potentially a romance explosion. 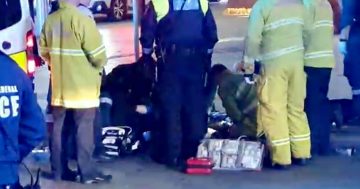