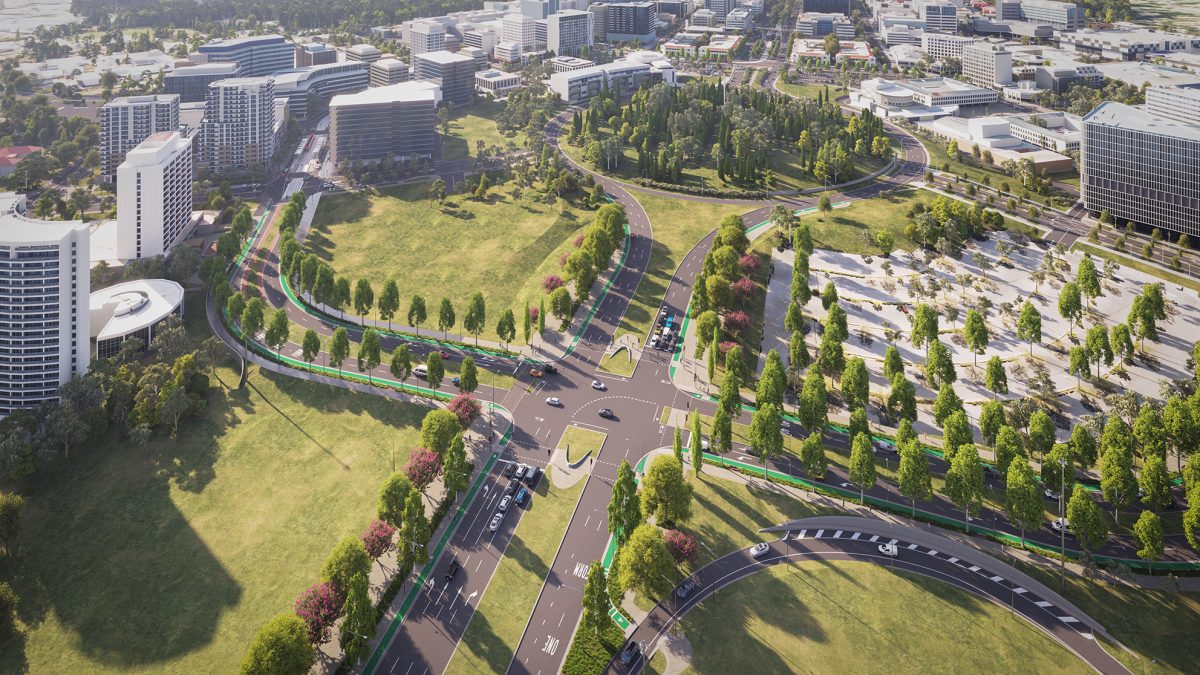 A new artist’s impression showing an overhead view of the London Circuit – Commonwealth Avenue intersection. Light rail will be built in the median. Images: ACT Government.

Another milestone has been reached in the extension of light rail with the ACT Government signing a $60 million, two-year contract with civil engineering firm Abergeldie Contractors to raise London Circuit.

The project, which will pave the way for the light rail extension to Commonwealth Park via City West, will cost $100 million in total, with $40 million going towards early works such as utility relocations and design.

It will also mean the start of several years of major disruptions for commuters, particularly those who regularly traverse the southern gateway to the city.

The London Circuit project will take two years but be followed by light rail Stage 2A and eventually 2B across the lake to Woden.

About 60,000 cubic metres of fill will be used to raise London Circuit by six metres to form an at-grade intersection with Commonwealth Avenue with dedicated cycle paths.

Transport and City Services Minister Chris Steel said commuters would start to notice significant work happening from November, but the biggest disruption will come in April next year when the bridge over London Circuit on the eastern side of the city is demolished.

READ ALSO: Tax tips and tricks for landlords – what you can and can’t claim

A number of diversions, new lights and other strategies will be deployed to help keep traffic moving.

The government will install traffic lights at the Coranderrk Street roundabout on Parkes Way where traffic is expected to increase. Construction will start soon and is expected to be completed before the most disruptive period of works in 2023.

Temporary traffic lights on the northern side of Vernon Circle will also be installed to allow safe right-turn movements onto Constitution Avenue and London Circuit for public transport.

For pedestrians, new signals and a path around City Hill will be built, linking Edinburgh Avenue and Constitution Avenue.

Two of the existing cloverleaf ramps will be removed as part of the works, with alternative access routes via Edinburgh Avenue and Constitution Avenue, channelling traffic to the city’s west and east.

Canberrans can also expect road, bus and traffic diversions, as the section of London Circuit between Edinburgh Avenue and Constitution Avenue will be closed for the duration of construction. 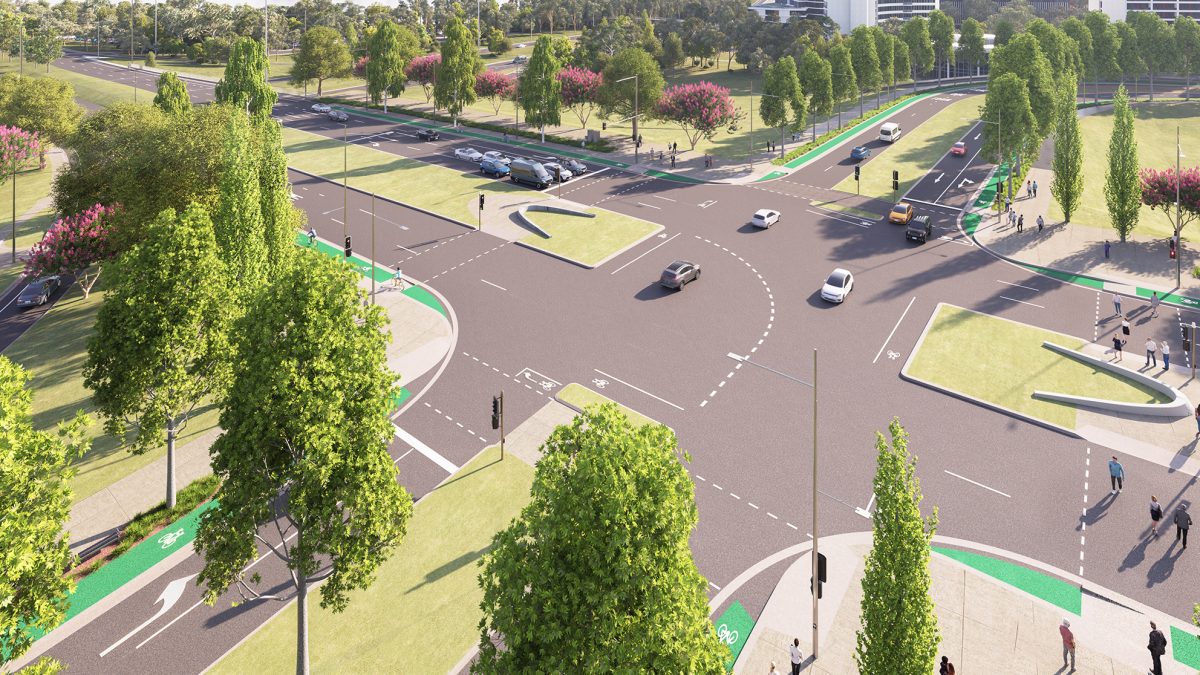 Another view of the project outcome.

Mr Steel said commuters could expect delays of about five minutes for people using the major approach routes into the city from the south, such as Kings Avenue and Parkes Way, as well as some delays for people coming from the north of the city into the CBD.

But the government will also be asking commuters to rethink their routes and travel times and consider using public transport, with buses to be given priority during the construction phase.

The other work commuters will have to negotiate is the Commonwealth Bridge strengthening and widening program, which the government will coordinate with the NCA to minimise disruption.

The government has established a new website builtforCBR.act.gov.au for commuters to find regular updates on the project.

Mr Steel said preparatory work was continuing on Stage 2A light rail, and a Works Application should be lodged with the NCA by the end of the year.

He said infrastructure firm AECOM was developing designs and the government was working on procurement with Canberra Metro.

“We expect before the end of the year that we’ll be able to show the community where we’re up to, and the design will be lodged with the Works Approval to Stage 2A of the project,” Mr Steel said.

“At the moment, we’re just finalising the development of the preliminary sketch plan.”

AECOM was also working on the environmental impact statement, which was critical in getting approval started on Stage 2B, he said.

Mr Steel said raising London Circuit would support many key projects in the city, including the extension of light rail to Woden, the renewal of the Canberra Theatre precinct and better connections to the Acton Waterfront.

He said the census data showing Canberra’s strong population growth only reinforced the need for infrastructure such as light rail.

“Mass transit is going to be critical to moving large numbers of people around our city when we hit a city of 500,000 and beyond in future decades ahead,” he said.

Have this government fo idea that causing vehicles to stop start at traffic light increases emissions? Or is all the green talk only good if there is a tax dollar to be made out of it?

Canberra needs more traffice lights replaced with overpass intersections not the other way around.

“… stop start at traffic light increases emissions”. Absolutely agree, purplevh. One of my pet hates is the inconsistency of the “supposed traffic light co-ordination” on ACT roads.

Have you ever approached an intersection with no other cars in sight in any direction, especially late at night, only to have your green light change to red, for no apparent reason? Then you have to wait while the lights cycle through each direction – still with no other cars around? Meanwhile, your car idles in a very environmentally unfriendly way.

Things have improved marginally in the last couple of years – but when Rattenbury (the Green guy!) was Minister for Traffic Lights (and possibly something else), co-ordination was non-existent.

They really mean “raze London Circuit”, but homonyms confuse them.

“Mass transit is going to be critical to moving large numbers of people around our city when we hit a city of 500,000 and beyond in future decades ahead”.

It is “encouraging” however that they are making provision for a cycle track, for when the people realise that the purpose of the slow train isn’t about public transport, but to force them into being Green by riding their push bikes. (Ok, sarcasm there, but it might be quicker, if you don’t mind riding in a Canberra winter or summer).

The tram isn’t about CC or anything like that. It’s about Canberra Council being able to flog off all of the land – read green space – along Adelaide Avenue. Developers don’t like buses and the Canberra Council sure as hell loves rates! How did we let this happen? Canberra was beautiful once.

And another opportunity for Mr Steele to well and truly cement his reputation as the most useless and inept Minister this town has ever seen. I’m sure he’ll rise to the challenge..

It’s a lot of money to slow down traffic and generate net negative impact on travel times. It will INCREASE emissions by adding traffic signals to a major highway. The Canberra Council won’t admit this project won’t take any cars off the road. After all who is driving to Commonwealth Park from Gungahlin as a regular commute? Its own work suggests a return on investment of 60 cents for each dollar spent. It’s a good thing there aren’t aren’t poor and suffering families in Canberra or a cost of living crisis.
The tram and the vandalism of London Circuit is a vanity project by an unchallenged out-of-control government.
If you love Canberra or if you like me were born here, it is time to do something. (Or are you all too worried about your comfortable Council jobs?)

All this for a Bus without options. Think about it.

How does one go from south of the lake to Parkes Way after this?

The same way you do now. you will exit left just before the soon to be demolished overpass.

The astronomical waste continues.
What impact on travel time will this give to commuters once completed?
Seems like someone’s pet project to make his/her personal cycle commute a bit easier, at the expense of making it more congested in the city and further killing it off. 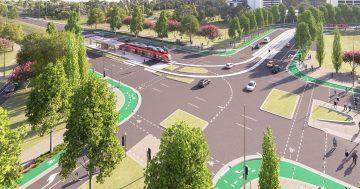