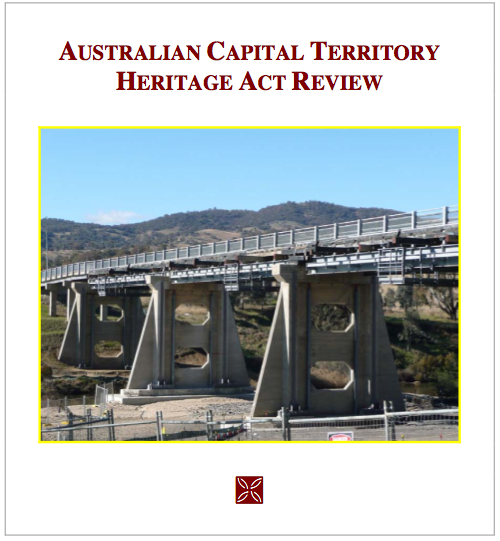 Mr Stanhope has released the review of the Heritage Act 2004 and promised to let us know what he thinks of the 111 recommendations early next year.

The take home from the executive summary appears to be this bit:

Having operated for five years, it is apparent there are many issues which should be addressed. Some of these are minor and technical in nature to improve operations or deal with unintended consequences. Other issues are more substantial, and require a policy re-orientation.

Compliance and enforcement is one important area where there has been little activity and capacity.

In another major area the ACT has fallen far behind in its heritage system. The ACT Heritage Register database is now very much out of date as a system, and provides a very much inferior platform to inform, to educate, to promote and to celebrate ACT heritage.

There are two general observations about performance in the past five years. Firstly, while much has been achieved, there is a strong sense that operations have tended to be largely reactive to circumstances. While the heritage system has responded to immediate problems, it has tended to try to solve these individually rather than address the systemic or strategic dimensions of such problems.

The second general observation is that there is much misunderstanding or a lack of understanding about heritage generally and the operations of the ACT heritage system. This applies both within Government as well as in the broader community. While there is no policy to conceal information about operations, there seems to be considerable scope to improve transparency and understanding in a range of areas.

Are these the same people who heritage-listed the Northbourne Ave. slums?

I guess that’s what happens when you put a former Marijuana Party candidate in charge of the ACT’s actions on heritage!

(And 111 recommendations, most with multiple dot points? Get real.)

That report cover looks like it needs heritage status.

On first glance at the headline I thought the Govt was considering heritage listing the F111!

I had the same thought.

On first glance at the headline I thought the Govt was considering heritage listing the F111!

Debora Gyllien - 6 minutes ago
and yet some of us who have been living here for decades and searching for support have found none. View
Scotty Jeffery - 11 minutes ago
Beauty! I’m happy for these people. BUT What about the homeless that have been sleeping in the Canberra’s winter for year... View
Perry Alopex - 2 hours ago
Nice! I can only imagine that trying to settle in Canberra would be pretty rough. It's got one of the highest costs for livin... View
Opinion 21

Aaron Nicoli - 4 hours ago
It’s also so much safer now… 60km/h jam brakes on for the camera, accelerate back out to 60… It’s achieved nothing fo... View
Phil Hogan - 4 hours ago
Got to pay for the tram 🙄 View
News 3

@The_RiotACT @The_RiotACT
ACT Health has reported 17 new cases of COVID-19. There are 17 people in hospital with COVID, including nine in intensive care https://t.co/1Bc2I9mRsp (1 hour ago)