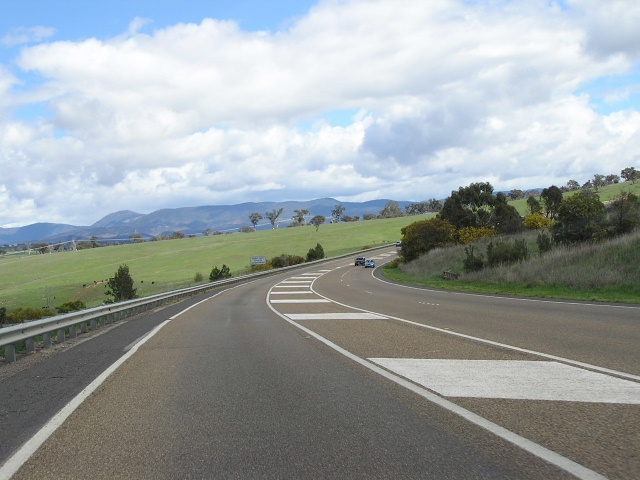 The ACT Government has released a tender to duplicate 4.5 kilometres of William Hovell Drive to improve commute times as new suburbs are developed in the Molonglo Valley and West Belconnen.

The section of William Hovell Drive between Drake Brockman Drive and John Gorton Drive, previously named Coppins Crossing Road, is the latest stage to be duplicated, with on-road cycle lanes and an off-road shared path expected to be part of the upgrades.

The tender said that section of William Hovell Drive is often congested during the AM and PM peak traffic times, and the congestion will only increase as the Molonglo Valley, the estate of Ginninderry, and the new suburbs of Strathnairn and Macnamara continue to develop and generate traffic.

The upgrade must remain within the existing road reserve as the important nature conservation areas of the Pinnacle Nature Reserve and Kama Nature Reserve that lie to the north and south of the road must not be encroached upon, the tender said.

The project may also incorporate ecological corridors between the two nature reserve areas into the design, as well as roadside parking.

The tender also recommended a traffic study to determine the capacity of the existing Drake Brockman Drive roundabout and whether a signalised intersection should replace the roundabout.

With more than 20,000 vehicles using William Hovell Drive every day, ACT Minister for Transport Chris Steel said there is a clear need to improve commute times as new suburbs are developed in the Molonglo Valley and West Belconnen.

“We are providing significant investment into road and cycling upgrades to ease congestion, and keep Canberrans safe and moving around our city efficiently,” Mr Steel said.

“Canberra is growing and we’re committed to investing in our road network whilst also improving cycling, walking and public transport infrastructure, ensuring that Canberrans have a choice in how they commute and move around our city.”

Detailed designs will also be prepared in coming months to upgrade Morisset Road in Mitchell to support future development in the area. Morisset Road is currently 1.25 kilometres long and built to rural road standards, meaning it is only suitable for low volumes of traffic.

He said providing a link directly to the Federal Highway along Morisset Road will divert heavy vehicle traffic away from Flemington Road which will improve the safety of all road users.

The works will also include paths for pedestrians and cyclists directly to the future light rail stop in Mitchell.

Kuringa Drive must be upgraded too and lights put in at its intersection with Kingsford Smith Drive. Nightmare trying to turn onto Kuringa drive in peak hours

That intersection could be improved by straightening the approach from Fraser to give better visibility of vehicles coming from Fraser. Not sure why when the resurfaced Kuringa about 10 years ago they didn’t straighten out some of it. It wouldn’t have been too hard.

And lights on Owen Dixon will help the Kingsford Smith drive intersection by providing a break in traffic coming from the Barton Highway direction.

Hooray. I’m sick to death of following muppets doing 75 kph downhill (and often braking to boot) in a 90 zone.

So we’re pushing more traffic onto Parkes Way, which is already a parking lot heading to the City in the morning.. BUT we’re not doing anything at the City end of Parkes Way where the actual problem is, we’ll fix 4kms of road near Holt.. Genius 🤦🏼‍♀️

Last election the duplication of Athllon drive was promised, all we got was a new bus stop later followed the removal of several bus routes. (Lucky we got the new one ay).

Now the government is duplicating William Hovell, previously it was only mentioned to be design work.

North side projects are funded off the back of closing up southside infrastructure.
No more buses hydro pool or indoor ice skating rink.

The first hint of complexity barr threatened to cancel the tram leg to woden. (Of which he doesn’t want to do anyway.)

The only duplication happening in half of canberra is Rates!

That's a long article about re painting Lines a road

Gréât idea? Once again let’s forget about Tuggeranong. The Ashley drive supposed duplication was stuffed up at Richardson with a single lane. Take Monaro highway and drake ford drive out and every other road in Tuggeranong is single lane.

About time Tuggeranong leaves the act and looks after itself. We get absolutely nothing for our rates contribution.

David Jackson start a Tug-xit campaign! The Hyperdome can hold your council meetings and the lake can be your drinking water.

Hasn’t our Minister for Road Transport been Green Shane Rattenbury for a decade? Won’t his “car free days” fix the problem?

Could think of way better roads that need it in Canberra

About 40 years over due

Will make getting to the jam on Parkes Way so much quicker!

Just don’t use the same contractors that did coppins crossing road and its intersection with william hovell. I could have done what they did with a shovel and wheelbarrow in the >12 months it took them to do less than 1km of road and an intersection.

How many years will this take??

Sounds good to me. That bit of road gets a lot of traffic. Should have been done thirty years ago.

Not sure about the bike lane, though. It’s a tough climb.

Peter - how long do you reckon that will mess with traffic for?

Briar Caldwell will take ages but long term will be awesome.

Gay McGuire - 2 hours ago
Liberals need a new leader that the people of Canberra can believe in! The current is embarrassing & a joke. View
Frank Koch - 15 hours ago
Well said Kate View
Jorge Gatica - 15 hours ago
Warwick Alsop the tolerant lefties View
Opinion 41

Jason Ezra - 2 hours ago
Bilzo Healy yes. Science suggests that this is the most likely outcome for the future. But science can’t actually prove a h... View
Bilzo Healy - 3 hours ago
Not possible, proven by science. View
Jason Ezra - 3 hours ago
Nyssa Miller I’m not choosing voluntary poverty because I’m not necessarily advocating that there is going to be an envir... View
Opinion 5

chewy14 - 2 hours ago
"We need more people owning their own home and being in charge of their own destiny." Why? There are numerous issues that dri... View
Capital Retro - 2 hours ago
What a pity it is that this article wasn't posted a few weeks ago. View
ace2279 - 3 hours ago
This Govt LOVES the ridiculous price of houses in the ACT as it means more revenue for them at all levels. Anything about "af... View
News 68

Kytie Mclign - 8 hours ago
Never understood why it wasn't there to start with ... View
ACT Election 24

Ben Appleton - 8 hours ago
If Coe really cared about the Canberra community and wanted to make Canberra the best place to live, work and raise a family,... View
Lifestyle 9

Neil Hobbs - 15 hours ago
If you like it, vote for it! www.contour556.com.au Peoples Choice prize - an original Jack Featherstone waiting for the lucky... View
Food & Wine 10

Brooklyn May - 16 hours ago
Phil MacMillan you must be so stoked! 🍔 View
ACT Election 62

Peter Campbell - 17 hours ago
What moderate would join the Libs these days? With so many homophobes, Trumpettes and climate science deniers, what reasonabl... View
News 94

Danielle Smith - 17 hours ago
Just got an appointment for my boy - 15th January!! View
Breaking 2

Scott Abela - 24 hours ago
Another slap on the wrist for a 'troubled teen' likely on drugs who won't suffer any real punishment while the owners and peo... View
ACT Election 7

Capital Retro - 24 hours ago
I think it is about time you discovered the internet, dolphin: https://www.abc.net.au/news/2014-05-30/aec-to-refer-8000-cases... View
show more show less
*Results are based on activity within last 7 days

A government speed detection van on Canberra Avenue has been shot at in an apparent drive-by attack, police said. An...
Food & Wine 47

The ACT has recorded its first new case of COVID-19 in more than three months, but it is believed to...
Opinion 56

Investigations into the violent stabbing of a man in his home at Jerrabomberra continue, with police in Queanbeyan keen to...
News 94

It's done. It's dusted. It's finally over. The 2020 ACT election is behind us, but many Canberrans are still expressing...
ACT Election 15

It's done. It's dusted. It's finally over. The 2020 ACT election is behind us, but many Canberrans are still expressing...
News 68

Civic will see new life breathed into it with the opening this Thursday (22 October) of the long-awaited Verity Lane....
Opinion 41

@The_RiotACT @The_RiotACT
Fetes are another victim of COVID-19, but that's not stopping Latham Primary School which is taking the trusty fundraiser online https://t.co/VcgKnntIDz (19 minutes ago)

@The_RiotACT @The_RiotACT
A severe storm trifecta will hit the ACT and south-east region of NSW this weekend, bringing rain, damaging winds and the chance of hail https://t.co/8xVU9hB3L9 (1 hour ago)

@The_RiotACT @The_RiotACT
In a major coup for the ACT, Manuka Oval will host two limited overs internationals between Australia and India in December https://t.co/vTVfI9z9SR (2 hours ago)