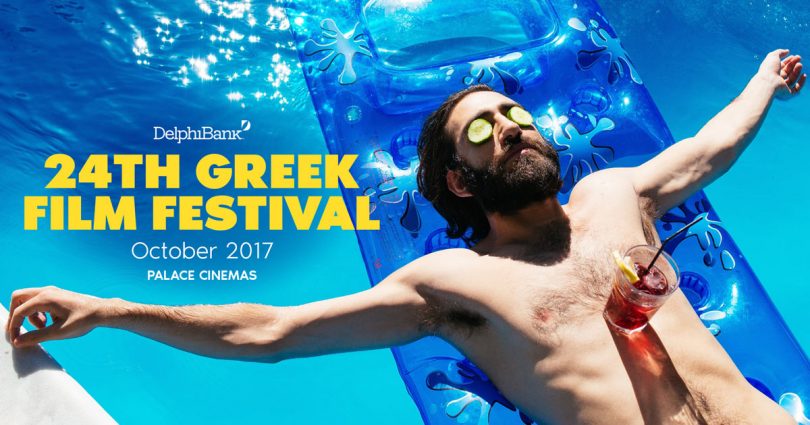 From next Thursday 19 October through to Sunday 22 October, eight of the best cuts of contemporary Greek cinema will be screening at Palace Electric Cinemas in Canberra.

With seven features, including one of this year’s big releases, and a documentary bound to catch the attention of Canberrans, the Greek Film Festival program offers a variety of comedy, drama, romance and wonder.

The festival will open with Roza of Smyrna (2016) – director George Kordellas’s “Greco-Turkish Romeo and Juliet”. Three items – a wedding dress stained with blood, and old photograph and a letter – all thrust collector of oddities Dimitris into an odyssey through history and family legacy in the Turkish city of Izmir (otherwise known as Smyrna prior to the Greco-Turkish War of 1919-1922). Based on the novel Ismael and Roza by Giannis Giannellis. Screening Thursday 19 October, 7:00pm.

Cypriot entry Boy On The Bridge (2016) is the compelling tale of Socrates, a carefree twelve year old whose innocence is clipped in 1980s Cyprus. Based on source material Land of the Golden Apple by British-Cypriot author Eve Makis, this dark debut from director Petros Charalambous finds our protagonist embroiled in a murder investigation and family fracture as heady youth collides with adult malevolence. Screening Friday 20 October, 6:30pm.

Blighted by economic crises throughout the last decade, Greece has faced challenging times of late. The country has nevertheless managed to produce consistently intriguing film and challenging times have given rise to challenging material. One of the biggest names in contemporary cerebral cinema is auteur and provocateur Yorgos Lanthimos. Delivering the confronting and critically acclaimed Dogtooth (2009), writer/director Lanthimos announced himself to English-speaking audiences with The Lobster (2015) starring Colin Farrell and Rachel Weisz.

Closing Night feature, The Killing Of A Sacred Deer (2017) reunites Kidman, Farrell and Lanthimos for another experiment in the darker sides of humanity. Steven (Farrell) is a charismatic surgeon devastatingly forced to re-evaluate his responsibility to a teenage boy in the wake of the latter’s unravelling behaviour. As testing teenager Martin, Barry Keogh will be recognisable from Dunkirk (2017), along with Alicia Silverstone playing Martin’s mother. ‘It’s all Greek to me’ might be the resounding sentiment for some when it comes to Lanthimos’s films but this provocative UK/Ireland co-production is set to close the festival in style. Prepare to be challenged by the purveyor of the peculiar in this festival highlight. Winner of Best Screenplay at Cannes Film Festival and also a Palme D’Or nominee. Screening Sunday October 22, 6:15pm.

Speaking of Dogtooth, Canberra’s canine enthusiasts should flock to the Special Event Screening of Australian documentary Dogs of Democracy. Athens, the birthplace of modern democracy, is these days home to an abundance of stray dogs. These apolitical figures populating the streets have become beacons of humanity and cause for unity among many who have very little. Greek-Australian philosopher and filmmaker Mary Zournazi investigates the stabilising effect our four-legged friends have afforded people in flux and a society in the midst of instability. Screening Sunday 22 October, 3:30pm, followed by a Q&A with director Mary Zournazi.

Otherwise, enjoy a cinematic love letter to the island of Crete in Xamou, the romantic drama of a female Greek golfer’s renaissance in the US production Swing Away, Hellenic hijinks in Greece’s answer to The Hangover, The Bachelor, or the dualities of wonder and reality, love and heartbreak amid the turbulent politics of Greece in the ‘70s and ‘80s in the aptly-entitled Mythopathy.

For more information on the festival and ticketing, visit: http://greekfilmfestival.com.au/films/canberra

Get ready for the ‘Greekend’!

JS9 - 13 minutes ago
In what world should a tenant have to provide a reason to leave? If they break during a fixed term contract they have require... View
nobody - 22 minutes ago
People should care about getting their own place. View
Marc Blackmore - 42 minutes ago
Kate Le-Goat you obviously were not around or don’t remember what happened when the government wound back negative gearing.... View
News 214

Kelly Rush - 32 minutes ago
Jodie Brown how is this thing still there. View
Jodie Brown - 34 minutes ago
Kelly Rush same flying fox that busted your knee View
Kylie Klose - 1 hour ago
Ryan came off that flying fox 2 weeks ago and landed on all fours and his nose after he flipped at the end. 😭 View
News 35

Lisa Gardner - 11 hours ago
Good on you Barb! View
show more show less
*Results are based on activity within last 7 days