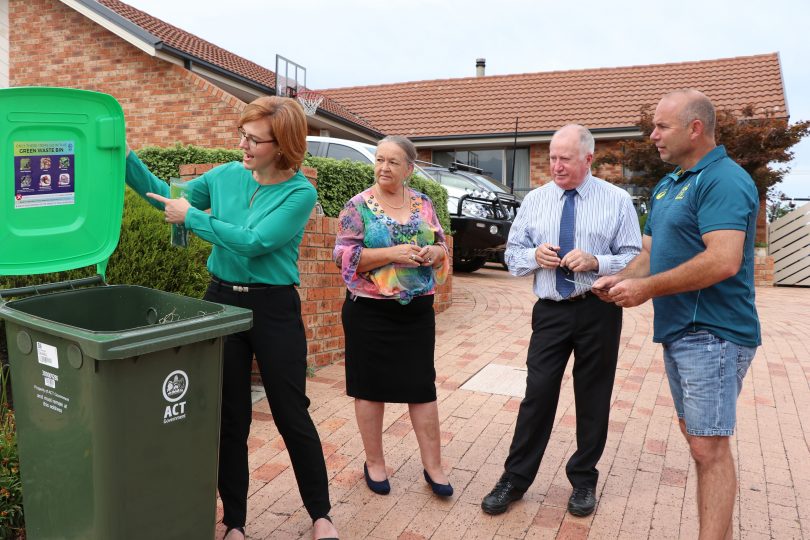 What they haven’t told us about yet is the plan to include rotting food.

Alby Mack - 2 minutes ago
The ACT government is to run the ACT and its issues. The Federal government runs the country and its issues and global issues... View
Steven Cox - 11 minutes ago
It is always easier to throw mud than to get in and fix the road. However, since the Government of the day sets the agenda, h... View
Peter Bee - 14 minutes ago
Bit like a Republic and the classic conservative whinge. Damn sure a gov can do more than a few things at once. View
Opinion 22

Ashley Wright - 4 minutes ago
Julie Macklin what do you define as the centre of the city? I consider it to be City Hill, in which case the interchange is a... View
Phil Hogan - 55 minutes ago
I agree 100% I have lived here all my life (64 years) and never seen it like this and it's not only Civic Dickson, Woden, Tug... View
Brenda Cooke - 2 hours ago
The Tuggeranong Parkway is strewn with litter from Glenloch to Woden. And weeds out of control. This is embarrassing and can... View
News 15

Futureproof - 33 minutes ago
Doing everything to assist rich toffs, yeah I get it now View
chewy14 - 2 hours ago
Haha, You've really shot yourself in the foot with this googling even though multiple studies now show this isn't an issue. T... View
News 66

Paddy Lou Hodgman - 3 hours ago
Mathew Grant You may not have noticed, but the yacht club doesn’t row (forwards or backwards) they sail - using the breeze... View
News 10

Treena Loiterton - 4 hours ago
Geoff Richardson what about dumping every single record about war/defence on the steps of the memorial and getting them to ke... View
Opinion 51

Ray Ez - 5 hours ago
Tiger Fit so no memorials for anyone?? Did you think that maybe this sort of thing helps a lot of veterans? View
Ray Ez - 5 hours ago
Ian Pearson you do understand the consultation was not a vote? They asked for people’s opinions. They are under no obligati... View
Ian Pearson - 5 hours ago
Concur - while Stalin might have said that numbers have a quality of their own, presumably the NCA did not agree. View
Business 1

Capital Retro - 5 hours ago
Being a rugby league player in Gilgandra you would have been inspired by the great Earl Harrison who played group football fo... View
Food & Wine 13

Lorna Towers - 6 hours ago
You couldn't afford all the meat you get at a real Brazilian BBQ. View
News 71

Finagen_erection - 7 hours ago
It’s simply a result of poor investments by governments (plural) and failures in leadership within CHS. The CEO has quit, t... View
show more show less
*Results are based on activity within last 7 days

GRAPHIC CONTENT: Some readers may find this court report highly disturbing. A Canberra man has been found guilty of repeatedly...
News 66

It's higher off the ground than any of its rivals. It has an all-wheel-drive system and driving modes for deep...
Breaking 0

Investigations are continuing into how a vehicle competing in the Finke Desert Race near Alice Springs left the course and...
Community 44

An electrician who coward punched a man leaving him in hospital for 75 days has escaped spending time in jail....
*Results are based on activity within last 7 days

Concerns about the wait time for a simple surgery to remove her son's tonsils, adenoids and grommets has led to...
News 66

Have you spotted the Dining Dome at The Dock on the Kingston Foreshore yet? This new Canberra dining experience has...
Opinion 21

@The_RiotACT @The_RiotACT
The United Workers Union is calling on the ACT Government to bring Assembly cleaners in-house and provide more secure employment, instead of relying on outsourced contracts https://t.co/cD8NtWhPNz (2 hours ago)

@The_RiotACT @The_RiotACT
CCTV footage has been released of the fight and Zane Daniel's coward punch that put his victim in hospital for 75 days https://t.co/EEG5CTI3LH (3 hours ago)