Greens come out swinging for the gang-gang 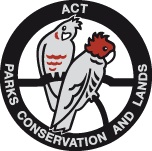 The Greens’ Shane Rattenbury is letting us know that the Greens want the ACT’s park rangers to retain their gang-gang logo following this morning’s news that the ACT wants to fold the service into a general ACT Government branding:

“The Greens think that the gang-gang logo is one logo that should stay with our parks rangers – it is not only our official fauna emblem, it’s a logo that has been used by the service for the past 30 years,” Mr Rattenbury said.

“People in the ACT and around Australia know and understand what that logo represents, and it makes our specialised parks rangers easily identifiable in the community.

“Working more effectively as ‘one public service’ is not about unnecessary rebadging rangers and repainting vehicles – what’s more important is the way our public service is organised.

The Greens have written to the Government to ask them to take the opportunity of the restructure to move parks rangers, and pest and weed managers, back into the new Environment and Sustainable Development Directorate where they naturally belong.

“Our parks service has been under increasing pressure in recent years to do more with less, and staff morale is low. Removing the logo, and leaving parks rangers stranded in TAMS isn’t going to make the situation any better.”

So can someone tell me why governments even need to get into this branding business in a way similar to that of commerical companies who are looking for a way to increase their edge over their competitors? It’s not like NSW and the ACT are competing to give out speeding tickets on Hindmarsh Drive, and Health isn’t competing with ACTPLA to build a new hospital.

One ACT Government logo is a good idea, although I have a vague memory of Carnell trying this at some stage, and later Howard at the Federal level (hence the now-common ‘Australian Government Department of …)

Why should different parts of a government have different logos? Other state governments, and the federal government, have all adopted a common government logo.

Really? Customs, AFP, RAAF, Fisheries, Navy and AQIS all have the same logo do they?

That must make it hard to tell them all apart.

WA changed many years ago based on cost. Fair point.

At what point, though, do we start to lose value for money when dollar value is the sole motivation? Cut costs too far and you have an inner-north pipeline that is too small and now requires $7.5m to fix and an $800k shed that is too small for the fire truck it was designed to house.

There is enough value added to the cost, in this instance, when one considers both recognition of a 30 year old logo and the associated community education. I also fear a universal branding may serve only to devalue the staff of the ACTGS, more so those in specialist areas like PCL. Is there a hidden cost associated with morale?

Why should we (the taxpayer) continue to pay $millions for new stationey each time a bunch of narcissistic bureaucrats recommend some rebranding? Ooooh look! WA has a common logo! Lets do what they are doing!

As I mentioned in the other thread, the reason WA has a common logo is that they had been spending millions on stationery every time a single narcissistic bureaucrat decided to rebrand their individual department. It doesn’t matter how much it costs to make the change, what’s important is whether it’s cheaper than keeping the status quo.

Why should we (the taxpayer) continue to pay $millions for new stationey each time a bunch of narcissistic bureaucrats recommend some rebranding? Ooooh look! WA has a common logo! Lets do what they are doing!

If it aint broke, don’t fix it. There is more value in retaining the logo (cost, recognition, community education etc) than adopting something else … like a poofy little Blue Bell flower. I’d love to see THAT logo plastered all over the ACTGS roadworker uniforms, LOL.

The real question is, what is the advantage of having a single logo? As I’ve said in another thread, who cares how the ACT government brands itself – apart from the obvious waste involved in the change. They’re the government, we know who they are, and it’s what they do that’s important not how they brand themselves.

It is important that the public know that a Park Ranger is different to a Parking Inspector. Park Rangers are highly trained specialist professionals – most are graduates and committed to a lifetime career. The ACT Government might be trying to cloud the issue of the current inadequate numbers of ACT Park Rangers by making them indistinguishable. Why attack moral in what is a proud profession?

I misread this title… Johnboy – your job here is done.

Oh thanks *so* much for the visual.

I misread this title… Johnboy – your job here is done.

I like the old rusty gate gang gang. And I like the logo. Heard one a couple of days ago. Getting rarer.

Rattenbury to save a logo.
Well I suppose he has to save something.

Maybe he could ask Bob Brown to introduce a Private Members Bill in the Senate.

Julie Macklin - 6 hours ago
Rheyce Spears Did your mother and grandmother have male guarantors? View
Andrew Dale - 8 hours ago
A 1 bedroom apartment is all you will get for 350k View
Julie Macklin - 8 hours ago
Unless a person has a very good income, or have inherited money, they should not be looking at a $700,000 house as their firs... View
Food & Wine 31

Lin Van Oevelen - 8 hours ago
John Moulis The cause of the fires was said to be the fast growing grass and undergrowth because of more rain, so that does s... View
Capital Retro - 11 hours ago
Lets debunk this notion now that climate changed was the cause of the 2019 - 2020 fires. The Ororral Valley fire was ignited... View
John Moulis - 12 hours ago
I'm reluctant to believe this. 1974/75 and 1975/76 were La Nina years. I remember being in Forster in January 1976 and it rai... View
News 17

Lynn Stape - 10 hours ago
agreed... I couldnt think of much worse than cleaning in a hospital at the moment... talk about front line staff.... View
Food & Wine 30

Mel Casao - 13 hours ago
Kevin Lo What ya think of this place? View
Luke Evans - 18 hours ago
Lisa Black I'll be in on that View
Kirrilly McKenzie - 18 hours ago
Anita Patel amazing! Terima kasih!!!! View
Property 56

Capital Retro - 13 hours ago
Volvo said in 2017 that this would happen in 2019. They are probably just virtue signaling. Meanwhile, their Polestar EV JV c... View
Simon Azzopardi - 15 hours ago
Very soon they will have no choice as EVs take over! Better get it sorted now rather than leave it to later.. View
Robert Azzopardi - 16 hours ago
Being on the EC side of things I congratulate the owners of IQ for allowing this project to proceed. I’m hopeful that other... View
News 82

Alan Hopkins - 14 hours ago
do you use the roads? last time I checked they weren't funded by the end user. Btw if you pay so much in rates perhaps you sh... View
Adrian Glamorgan - 17 hours ago
interesting thought View
Adrian Glamorgan - 17 hours ago
You benefit by having a city that isn't as clogged up with cars as it would be if a light rail didn't exist. "User pays" is t... View
Opinion 3

@The_RiotACT @The_RiotACT
The first koala joey to be born at the National Zoo and Aquarium has been officially named. So what's she called? https://t.co/LsECG70PBh (7 hours ago)

@The_RiotACT @The_RiotACT
The January storms may be a sign of future disasters, but even now, 67,000 ACT households may be unprepared for storms this summer https://t.co/B9i7abgx1Y (9 hours ago)