Greens would aim to get more women on bikes 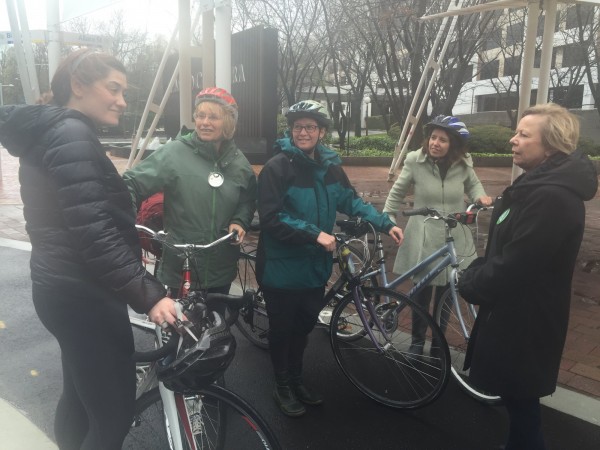 The Greens have announced the final plank of the transport plan they’ll take to the ACT election: $1.1m over four years to establish a better-resourced Active Travel Office headed by a walking and cycling coordinator in a bid particularly to encourage more women and children to travel by bike.

All the Greens’ women candidates – Veronica Wensing (Yerrabi), Jen Faerber (Murrumbidgee), Indra Esguerra (Ginninderra), Caroline Le Couteur (Murrumbidgee) and Rebecca Vassarotti (Kurrajong) were on hand, most on their bicycles, for the announcement in Civic this rainy morning.

Ms Wensing, who is the ACT Greens spokesperson for women and social inclusion, said that while 39% of men ride a bicycle at least once a week in Canberra, only 13% of women do so.

“We think this is partly because women don’t necessarily feel as safe on a bicycle and on the road,” the lead candidate for Yerrabi said.

“Part of transforming our city into an active travel capital means making sure women and children can feel as confident as men travelling around our city.

“We need facilities that work for everyone – women, people with disabilities and people of all ages.”

She said the Active Travel Office would work to fix sections of road or bike paths that were unsafe due to inadequate lighting, for example, and would let Canberrans know about the infrastructure available to them.

ACT Greens leader Shane Rattenbury said his party’s transport plan would make Canberra a city that works for the community, not just the other way around.

“So far we’ve seen a Liberal party addicted to roads at the expense of the sustainable transport we need, and a Labor party that talks the talk on an active, connected Canberra but still fails to properly invest in walking and cycling infrastructure,” Mr Rattenbury said.

There are at least two gyms which are women only (Fernwood, Curves) and a lot of people think that is reverse discrimination. I went to a gym in Sydney recently and the manager told me they had an exemption from the Sex Discrimination Act a few years ago to have a men’s only gym. It quickly turned into a gay gym and the straight males including footballers and big bodybuilders stopped going. They had to scrap the policy and go back to being a co-ed gym.

That’s all very well, but what are the Greens promising to do for the fish?

I don’t know about here, but in Victoria they want to kill the Barramundi. Then there will be no more Barramundi fishing in Victoria.

That’s all very well, but what are the Greens promising to do for the fish?

And yet its still illegal to try and get more men into teaching positions by offering scholarships or specific positions.
It also undermines every female academic who has actually earned their position as now every woman faces the question were they the best for the job or just because they happened to be born female.

Next thing we will see is “only LGBTGI people from Torres Strait will be considered”.

And yet its still illegal to try and get more men into teaching positions by offering scholarships or specific positions.
It also undermines every female academic who has actually earned their position as now every woman faces the question were they the best for the job or just because they happened to be born female.

there are plenty of jobs that are generally accepted as female only. I’m sure a 15 yo lad may be a top retail assistant, motivated and enthusiastic. But he is sure as blazes not likely to be employed as a fitter at somewhere like bras and things.

This concept seems to be spreading with ANU looking to get more women into jobs or is that “women only” jobs:

A “walking and cycling” coordinator is a waste of ratepayers $.

It’ll sure present an opportunity to have a failed Greens candidate at the top of the recruitment selection matrix though! : )

No one in my house agrees with this.

Seems like a good policy aim to me. Addresses several different social ills at once: health, pollution, road congestion.

” Ms Wensing, who is the ACT Greens spokesperson for women and social inclusion, said that while 39% of men ride a bicycle at least once a week in Canberra, only 13% of women do so. “We think this is partly because women don’t necessarily feel as safe on a bicycle and on the road,” the lead candidate for Yerrabi said. “

A “walking and cycling” coordinator is a waste of ratepayers $. It will achieve nothing that effective planning, common sense, looking at a map and listening to users feedback, wont do.

how about SOME women might not feel comfortable on a bike.

There are plenty that are fine about it though.

Why focus on plans for “women and children” cycling? What about encouraging men to cycle with their children and take them to school, or the shops, or on whatever outing? Oops! Greens perpetuating sexist stereotyping!

As a female who cycles I have never had a problem with hat hair, or even considered it a problem. So, comb your hair after taking off the helmet. Easy.
But then, I would never go in or a useless, high maintenance hairstyle.

Banging my head on my table right now. Is this seriously what the Greens think is the most pressing issue for women in the ACT?

IMO, for women, housing affordability – particularly for older, single women in part-time or casual work – is much more important than safe bike paths.

My thoughts exactly. Long curly hair and a helmet is not a good combination. Which is not to say I think helmets are a bad idea – however, they do make cycling an activity I don’t want to do.

Maybe they should try asking women and children why they don’t ride bikes instead of making assumptions.

Paul Morshead - 7 minutes ago
Graeme McLennan you finally made a “list” View
Troy Scott - 1 hour ago
I think I will boogs I was pretty good at it at 7 View
Steve Hugler - 4 hours ago
Troy Scott there’s still time for you to make a shot put comeback mate. 3 years and you could be at the Olympics!... View
Community 37

Coral Alexander - 18 minutes ago
Charlotte Ellen yuuus as if you could miss it. Paola Leon you in?... View
Caroline Le Couteur - 2 hours ago
Please don't release a heap of plastic rubbish. We have enough problems.... View
Tracy Parker - 3 hours ago
Perth do a duck derby every year where around 15000 are released, they re use them and collect them all at the end of the eve... View
Sport 19

Dave Horsley - 20 minutes ago
How would a club like Penrith convince quality players to travel 6+ hours every week plus training when they could just join... View
Sione Nonehh Taufui - 39 minutes ago
Sione Taufui ouaaa 😂😂😂 party party... View
News 238

Lucy Doan - 21 minutes ago
Pls plant trees like those in inner North or inner South, do not convert new suburbs into Belconnen-style please! View
Jarrad Job - 2 hours ago
Doug Hovi Have to replace all the trees they cut down to make room for all the solar farms in the future🤣... View
Robert Woodrow - 3 hours ago
Tahlia Bruce or possibly not .... View
Lifestyle 30