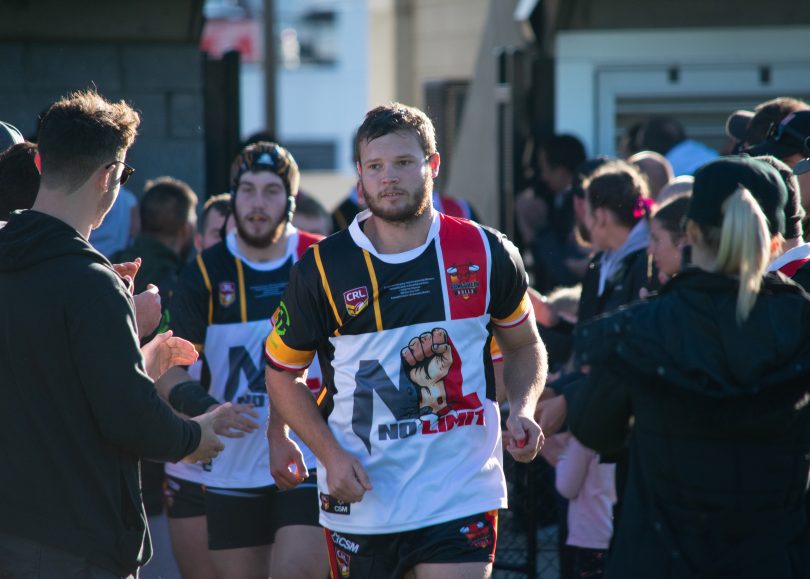 Gungahlin Bulls running out with a specially designed jersey to raise money for Menslink. Photo: Supplied by CRRL.

As Martin Fisk sat in the stands watching the Gungahlin Bulls play in specially designed jerseys with the Menslink logo on their sleeves on Saturday afternoon (15 June), his phone pinged in his pocket.

As the CEO of the men’s mental health charity glanced down at his phone, he realised it wasn’t just an ordinary message. It was a young man at the end of his tether, saying he had nothing to live for and was looking for a way out.

He sprang into action and a member of the Menslink team called the struggling man and organised a priority counselling appointment for him at no personal cost. For Mr Fisk, it was yet another reminder about how prevalent men’s mental health is, regardless of age or background.

“As I was there watching the first-grade game, we got an online request from a young man,” Mr Fisk shared. “He said that he had pretty much come to the end of the line and he had run out of options of what to do to get out of his circumstance. 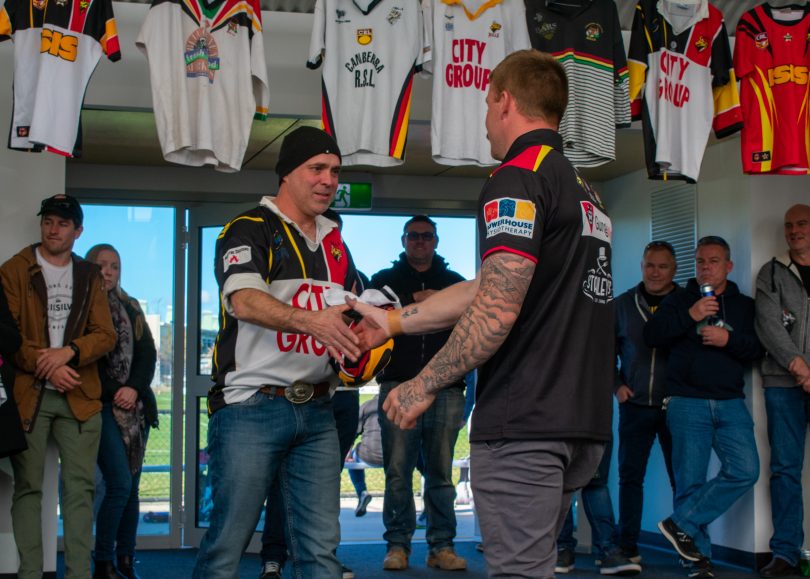 Former players presented the current first-grade side with the special jerseys before kick-off on Saturday.

“He received a phone call that day, and a follow-up call on Sunday to see if he was okay and we managed to book him for an appointment on Tuesday (18 June). He got in touch with me this week and thanked me for everything Menslink had done so far for him.”

After the deaths of former players Paul de Dassel and Michael Thompson, who passed away a couple of months ago after battling mental health issues, Gungahlin Bulls wanted to use their annual Old Boys day to not only honour the lives of the two men but to help other men who might be struggling.

So the club president Brad Smith approached Menslink to see how they could help raise money for men struggling with their mental health. 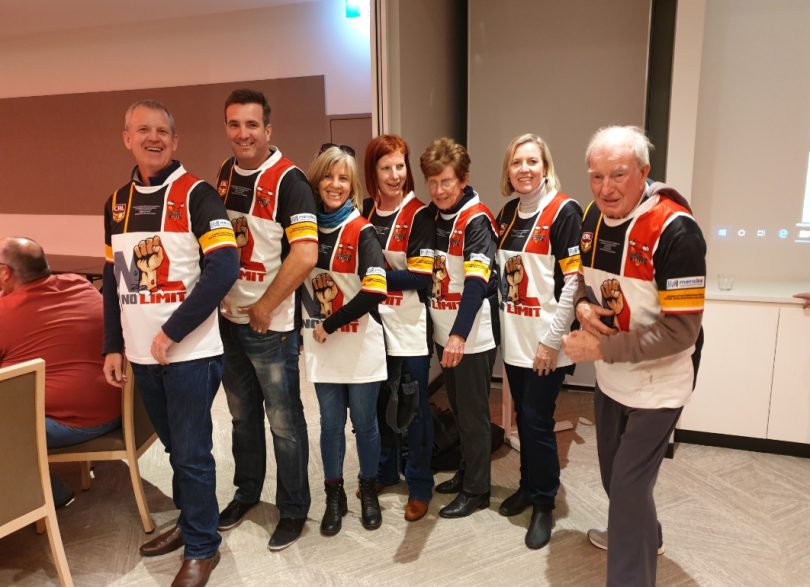 Paul de Dassel’s family who donated $1200 to Menslink on the day. Photo: Supplied by Gungahlin Bulls.

“In their memory, we want to raise some money for a charity to support men’s health and that was Menslink,” he shared. “We had 36 family members from a former player come down for the day so it was massive for his family.

“It was an emotional day. Everyone who played on the field that day came off and said it was good to be part of something and give back to families in the community. If we can save one or two lives of young men, it is the least we can do.”

The jerseys were auctioned off on Saturday night and raised around $3,000 for Menslink, where Mr Fisk spoke to the group about the importance of not being silent. 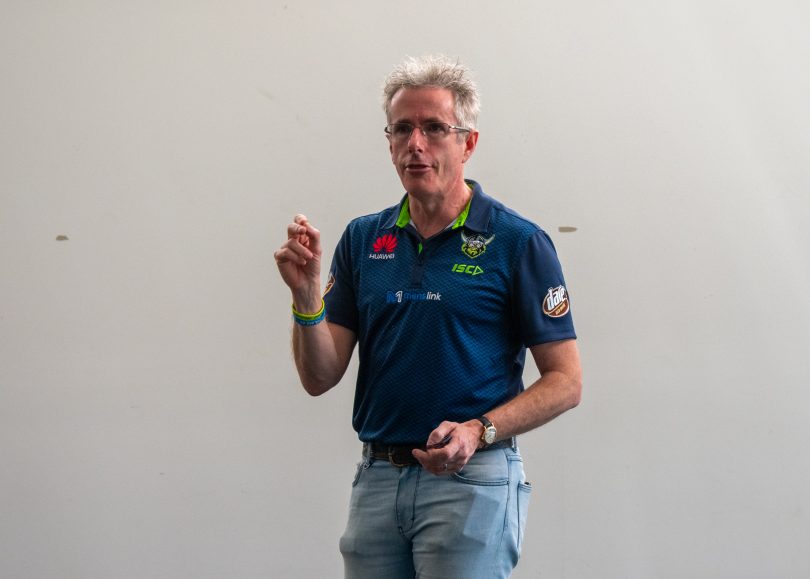 Menslink CEO Martin Fisk said the charity had seen on average 31 per cent increase in clients every year for the last seven years.

“One of the challenges we see with a lot of mental health services is that you need to have gone and seen a GP first, you have to have a Medicare card, you need a mental health plan and you need to sign up and see a psychologist,” Mr Fisk said.

“That whole process can take weeks and sometimes it can be too hard. One of our philosophies at Menslink is that if you are in trouble, you can get to see someone quickly with no cost and no fuss.

“Let’s not book people in for three months time, let’s do something now.”

chewy14 - 42 minutes ago
Kenbehrens, I definitely see a role for the seizing of cars and prison time for repeat offenders as well.... View
phydeaux - 2 hours ago
"Penalising “poorer” [sic] people less, is an incentive for them, and a serious grievance to others" So sorry to hear tha... View
kenbehrens - 2 hours ago
Difficult question. I've often thought that fines are inequitable with those on higher incomes not adversely impacted. Yet th... View
News 5

chewy14 - 45 minutes ago
BJ, Whilst I think politics definitely influenced early parts of the project, Tuggeranong has since seen the construction of... View
bj_ACT - 2 hours ago
Tuggeranong’s water quality has not been getting better. I didn’t know you were such an easy marker on the score of ACT g... View
chewy14 - 4 hours ago
BJ, The problem is that short of getting rid of the Lake entirely, there is no easy (or cheap) solution. Most of the problems... View
News 319

bj_ACT - 59 minutes ago
That’s a really interesting read A nony mous. We deserve to know more research and analysis. Many of the Oaks and Cedars of... View
A Nonny Mouse - 4 hours ago
The Local Government Association of South Australia commissioned an 'Independent Inquiry into Management of Trees on Public L... View
bj_ACT - 6 hours ago
I’d certainly like to see some peer reviewed stats on the tree falls in Canberra. I noticed on radio last week the TCCS exe... View
News 1

@the_riotact @The_RiotACT
With work-from-home and workplace flexibility now the norm, businesses are focussed on creating offices that are more homely and enhance staff wellness. Specialist #office space business #Burgtec has some novel solutions https://t.co/I1bnCGMuRp (17 minutes ago)