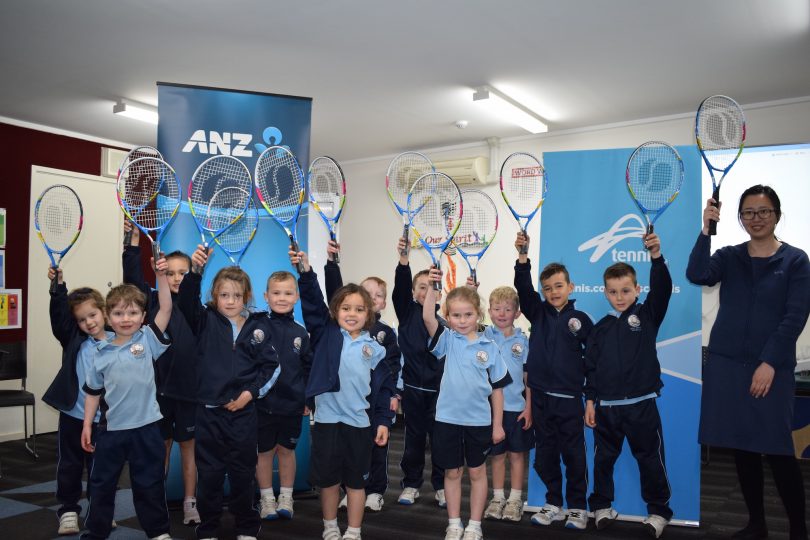 More than 100 kindergarten students in Gungahlin took their first steps towards a tennis career when they received their first tennis racquets from Canberra’s top players – Nick Kyrgios and Alison Bai.

The signed tennis racquets were delivered to students at Holy Spirit Catholic Primary School as part of the ANZ Tennis Hot Shots Racquet Roadshow. Kyrgios and Bai also gave the students a virtual lesson in the form of a video message to the students, along with a question and answer session with Australian tennis legend Todd Woodbridge.

Alison Bai said she started playing tennis as a six-year-old and still has her first racquet. 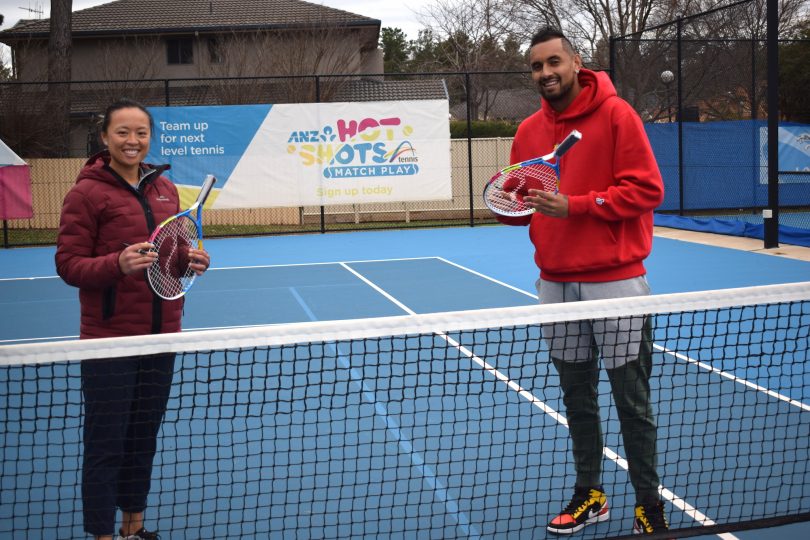 “I think my Dad bought my first racquet. I still have it. It is a pink Prince one and I loved it so much it has got so many scratches on it,” said Bai.

“Tennis is an awesome sport. It is for all ages, you can start at five, six, seven years old or you can play until you’re 90.”

Kyrgios recalls training alongside Bai when he started as a seven-year-old.

“My mum gave me my first ever racquet. I can’t really remember it, but I had a fun time coming down to these local courts with a big group of kids,” said Kyrgios.

“You only need a racquet, a couple of tennis balls and a friend and you could go and play for hours.”

READ ALSO: Nick Kyrgios emerges as sports’ voice of reason when it comes to COVID-19

“You could see they were over the moon about it, and I think there will be kids in kindergarten who’ve taken up lessons who will love to take home their own racquet that’s got somebody famous on it,” Mr Farrell said.

An additional 660 students from 14 schools across the ACT will also receive brand new racquets as part of the initiative. 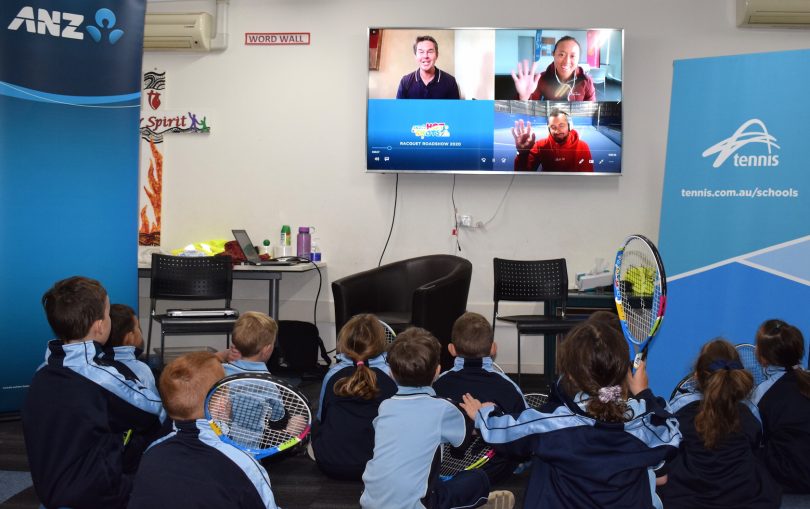 Holy Spirit Primary has been running the tennis program for more than six years with their own dedicated ANZ Tennis Hot Shots courts. The kids will have the chance to test out their new racquets with kindergarten set to participate in tennis when the next school term begins.

This initiative involves delivering racquets to 30,000 first-year primary school students from more than 800 schools across Australia to combat declining levels of activity in children.

Tennis ACT CEO Kim Kachel said the initiative will give another 760 kids across the ACT the opportunity to get active and lead a healthy lifestyle.

“Tennis Australia’s partnership with ANZ has helped us to put more racquets in children’s hand than ever before,” Mr Kachel said.

Valerie Foster - 5 hours ago
Not everything new is good. View
News 134

Brianna - 7 hours ago
Spiral, they selfishly put their customs, wants and needs ahead of everyone else. It looks like some of these people might be... View
rationalobserver - 18 hours ago
The Government (PM&C - statistical value of a life) has a number for that. Once the combined costs (economic, social and envi... View
rationalobserver - 19 hours ago
Actually, the data shows that the only domestic violence related increase we have seen was the noise from DV advocacy groups... View
Public Sector 16

Robyn Holder - 8 hours ago
When men stop wearing their ridiculous old fashioned suits and ties because they have no imagination the they can discuss it.... View
Angela Hunter - 20 hours ago
Could someone please tell the dept of Home Affairs that it's almost almost 2022. Next they'll be bringing back tea ladies and... View
Community 15

HiddenDragon - 10 hours ago
On the day it was announced, the jump in the ACT unemployment rate was being spun in the local media (presumably at the promp... View
News 22

brianf - 13 hours ago
All politicians, their staff and lobbyists should have been required to get tested and isolate for a fortnight before travell... View
Food & Wine 12

Jude Lou - 19 hours ago
Are there at least 10 layers? Wowww View
show more show less
*Results are based on activity within last 7 days

@The_RiotACT @The_RiotACT
Punk rock, high energy jams and Sunday sessions - there's something for everyone this week. As usual - check with venues before you head out https://t.co/Fyusza28xQ #gigguide (5 hours ago)

@The_RiotACT @The_RiotACT
The @NatGalleryAus has recently revamped its Art Cases touring exhibition with new themes and new objects. Find out how you can bring this hands-own experience in contemporary art to your school or community.https://t.co/ksjuEaNhYv (6 hours ago)

@The_RiotACT @The_RiotACT
Cup and Coaster in Fyshwick feels like coming home - and with an exciting menu that changes every two months, there are plenty of reasons to become a regular, as Michelle Taylor discovered https://t.co/97JbTzoSm2 (8 hours ago)