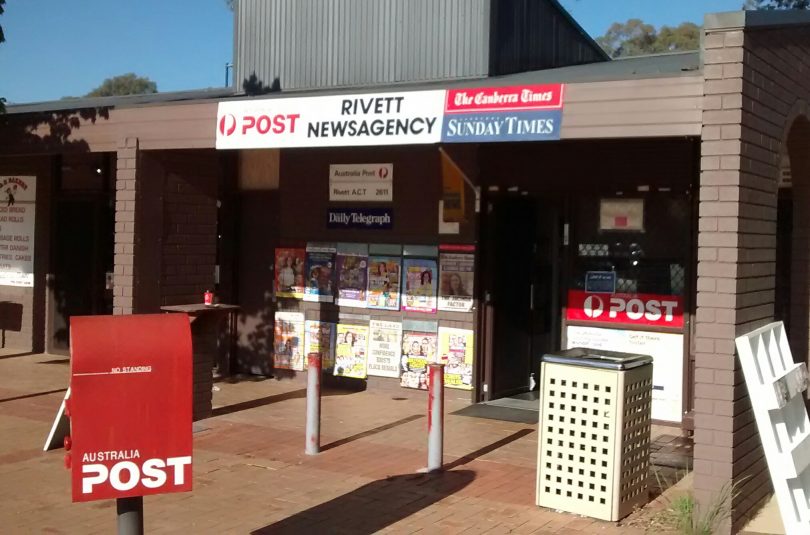 The Rivett Newsagency which was held up at gunpoint on Saturday morning.

The ACT’s spate of aggravated robberies worsened over the weekend when a masked bandit held up the Rivett Newsagency and post office with a loaded gun and made off with about $1500, firing a warning shot as he fled.

ACT Policing said the man, who had covered his face with a piece of coloured cloth, entered the agency about 8:30 am on Saturday morning with a firearm, threatened staff and customers and demanded the contents of the till.

Marnie Singh thought it was a prank but soon realised it wasn’t when the offender put the gun to his head and then punched him the head.

“I thought ‘are you kidding me?’ and he said ‘nah tell me where your till is,” Mr Singh told the ABC. “I said ‘you’re joking right?’ and then suddenly he moved his gun from his right hand to his left hand and he punched me in the head,” he said.

Mr Singh told the ABC that he opened the cash register and the gunman stuffed about $1,500 into a green plastic bag he was carrying.

Police said the gunman fired a warning shot into the air as he fled after numerous witnesses followed him. He was last seen running along the pedestrian pathway after crossing Bangalay Crescent, Rivett. 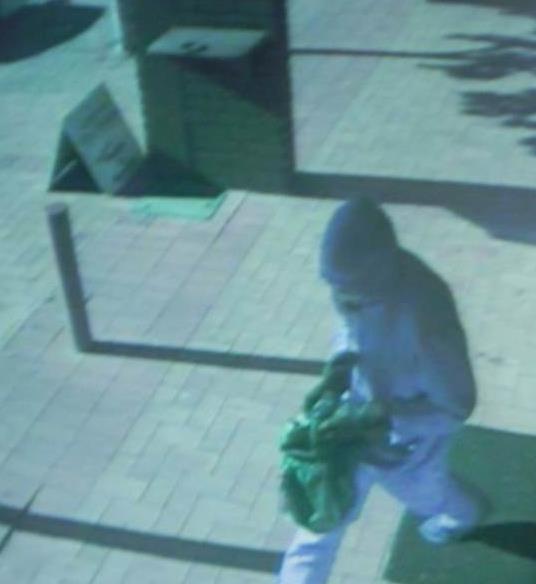 CCTV image of the offender. Note: The CCTV colour is poor and the actual clothing is darker than appears on CCTV.

The agency was burgled earlier this year and the latest incident has convinced him to improve security.

He will move the counter to the very far corner of the shop so he can see people coming and consider installing a glass panel around the counter.

After recently moving from New Zealand, Mr Singh said he no longer felt safe in Canberra.

The gunman is described as Caucasian, between 165cm to 175cm tall with a slim build and brown eyes. At the time the man was dressed in dark coloured clothing and sneakers with a dark coloured cloth covering his face. He was also carrying a dark green plastic shopping bag.

ACT Policing has recently set up a special taskforce to investigate aggravated robberies.

David Keir - 48 minutes ago
Don’t worry about the homeless men View
Lilly Walter - 1 hour ago
Wayne Williams, bloody oath they do. More manipulative and cunning women are. If I had the fund or patience to create a men o... View
Wayne Williams - 2 hours ago
Lilly Walter tell that to the recently fatherless young fella in Brisbane, women commit family violence also View
News 10

brianf - 1 hour ago
The stats I've seen suggest about 90% of accidents between cars and 'vulnerable road users' (cyclists and pedestrians) are th... View
paservank - 2 hours ago
...or get rid of all the cars? (an equally stupid and self-centred idea) View
Community 24

chewy14 - 3 hours ago
This is a strange comment. Firstly, it assumes that the local ACT government is fully in control of house prices in the ACT w... View
Aneta Petreski - 3 hours ago
Isnt this most of Canberra?... View
Capital Retro - 4 hours ago
Glad to see the madness hasn't reached Tuggeranong suburbs yet. View
Lifestyle 13