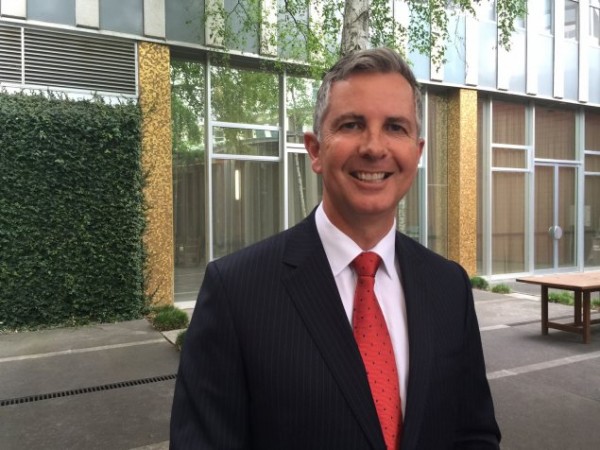 Opposition Leader Jeremy Hanson has lauded outgoing Labor MLA Simon Corbell as “a formidable opponent” who has been “less flappable than his colleagues” during his 19 years in the Assembly.

“Reflecting on Simon it strikes me I’ve spent much of the past eight years arguing with him, but he’s spent more than twice that arguing with Liberals, and with some success, I would add,” Mr Hanson said in response to Mr Corbell’s valedictory speech today.

“You have been a formidable opponent, there is no question,” he said, addressing Mr Corbell across the chamber.

“There is no doubt you are across your brief, methodical, mostly you have been unflappable … it’s fair to say you are less flappable than your colleagues.”

“You have been a true believer for the Labor cause, and I think your passion has shone through on issues that are dear to you, not that we’ve always agreed with you, but you’ve argued passionately.”

The Liberal leader also told the Assembly today of his horror at discovering Simon Corbell was an attendee at a boot camp program he’d signed up for.

“I was horrified to see Simon in shorts, not a good sight, and determined not to be beaten by him,” Mr Hanson said.

The former army officer said he “could do him on the pushups” but that Mr Corbell had the better of him when it came to running.

Mr Hanson said that he and Mr Corbell had formed a “slightly unlikely” friendship given the circumstances.

“I have appreciated and enjoyed that aspect of our relationship,” he said.

“We probably won’t miss you as much as the Labor Party will, whether in government or opposition, there is no question they will miss your experience, courage and ability in this place.”

He paid tribute to the length of Mr Corbell’s service, too, describing it as remarkable, and noting that since Brendan Smyth’s “untimely departure”, it was unlikely to be matched for some time.

Buck Johno - 25 minutes ago
From what I remember of night rider busses it was only over summer. View
PE TE - 9 hours ago
Sean Bishop but the Uber rapes have increased View
Kim Rumble-Kozjak - 19 hours ago
Jacqleequack it was all good fun until the two hour wait in the cab line, in stilettos, without a jacket in -2 🥶❄️ View
Property 28