Hatfield Dodds comes out against the Commonwealth veto of ACT Laws

The Greens energetic senate candidate, Lin Hatfield Dodds, is today banging the drum for an end to Commonwealth powers to override Territory laws:

“The ACT has come of age. It has elected stable governments and its parliament should be able to make laws in the same way as the States.

“Senator Gary Humphries has had eight years to introduce legislation of this kind. He has never even tried.

“The Greens have tried to introduce this legislation in the past, and today, we are asking for Senator Humphries’ support.

“A mature, independent Canberra needs multi-partisan support. The Greens are committed to making this happen.”

Canberra doesn’t have the critical mass of population to be able to decide our own laws.

My faith in the Legislative Assembly is somewhere between zero and two fifths of FA.

so, about one fifth of fa?

the sentiment is well placed, the realism is misguided. green – surprised?

I have about as much faith in the Legislative Assembly as I ever did in any state parliament, or in Commonwealth Parliament. They’re all hamstrung and ineffectual. Nonetheless, I makes me wonder whether she even realises that the change she’s proposing would require a referendum, and most of the people who would vote in that referendum hate us because of where we live.

We’d have to declare independence to wrest the power of veto away from the Commonwealth, and I’m not sure that’s worthwhile. Besides, the Commonwealth is subject to the veto of some funny little English woman anyway, so what’s worse?

Still, I appreciate the sentiment.

No, and the homosexual marriage nonsense proves the LA can’t be trusted to act like a mature governing body.

As it would require a change to the Constitution wouldn’t it need to go to a Referendum?

I can’t imagine a referendum being announced over something that most of the nation couldn’t give two hoots about.

A referendum would amend the section that affects the NT and the ACT, to make a convincing case a pollie should engage in talks with the NT Government and try and lobby the Government as one unified cause, with the support of their Communities. If it was about the NT & the ACT it would certainly be easier to appeal to the public if it appeared to be a ‘national’ issue.

The majority of the vote needed to pass something that goes to a referendum is so ridiculously hard to obtain, that it isn’t likely to be passed in the affirmative anyway. Even if the major parties supported it, and they don’t, I think most Australians would be happier to maintain the status quo.

I think we need to accept it as our lot and take our place as a Territory, it’s not like the power is being used willie-nillie or anything.

Canberra doesn’t have the critical mass of population to be able to decide our own laws.

My faith in the Legislative Assembly is somewhere between zero and two fifths of FA.

As I recall Humphries actually crossed the floor on the Senate vote on the motion to override the ACT legislation. A safe move given there were so many Senators in favour of the motion that he didnnt have to worry that it would actually get up.

I think Spectra is right – people’s opinion on whether or not the Federal parliament should be able to override either territory’s legislation was governed by their opinion of the legislation.

I support Hatfield Dodds in theory – I just wonder what makes her think she can bring about a change to the law. At best she will be a member of a party that has a deciding vote in the Sente, not a majority and we can rightly assume that the major parties would repeat their opposition and join forces to vote down this kind of legislation.

But then again, change has to start somewhere … I’m just not so sure this small (in the scheme of things) act is going to sway ACT voters.

A mature, independent Canberra needs multi-partisan support. The Greens are committed to making this happen.

Joke of the day?

No more or less than I have in the feds. The only stepping in they’ve done in the history of self government, as far as I can recall, has been to smack down euthanasia and same-sex marriage. If, like me, you’re basically for both those things then it’s difficult to regard the federal intervention powers as a positive thing in practise (regardless of what I might think of them in theory). 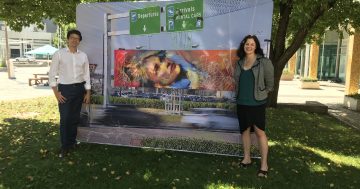