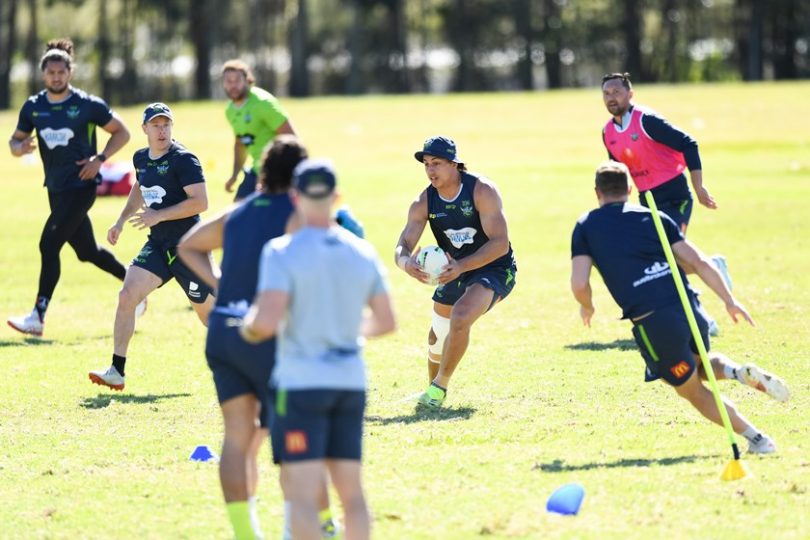 The Raiders training on the Gold Coast. Photo: Canberra Raiders.

The next month will determine whether the Raiders make the finals. There is no reason why they can’t if they consistently replicate last week’s performance against Parramatta.

The Eels dominated practically every aspect of the game. Statistically, the Eels should have won.

Parramatta had 56 per cent possession, they dominated field position, and they had 1548 run metres compared to the Raiders 1401. The Eels had more post-contact metres.

The Raiders made almost 50 more tackles.

Canberra went into the game with their fourth-choice fullback in Jordan Rapana, with Charnze Nicoll-Klokstad, Bailey Simonsson and Xavier Savage all out through injury.

The most influential player in the team, Josh Papalii, spent limited time on the field after suffering a concussion. This was in addition to the absence of Jack Wighton through injury.

It had the look of a makeshift team against one of the form sides of the season. Parramatta is well above the Raiders on the ladder.

The 12-10 victory, the Raiders’ third victory in a row, prompted many to ask where that performance had been for much of the season.

It’s a fair comment when you look at the Raiders’ 44-6 loss to the Titans on 3 July and the 35-10 loss to Parramatta earlier in the season.

It’s interesting to note that both these losses were at home. In fact, the Raiders’ away record is far better than at home this season, which could benefit the team given the remaining six games in the regular season could be played in Queensland.

The statistics are quite telling. The Raiders won three times as many games played away from Canberra Stadium this season.

Over the next six weeks, Canberra faces the Knights, the Dragons, the Storm, the Sea Eagles, the Warriors and the Roosters. All these games are to be played away from Canberra Stadium.

Based on the performance against Parramatta, they should win at least three or four.

The Dragons, who are eighth, on the same points as the Raiders, arguably have a tougher run home. They have to face Souths twice, the Roosters and the Panthers.

Included in the mix for the Dragons is a game against the Raiders on Friday week.

Another factor in the Raiders’ revival has been the return to form of Rapana, Harawira-Naera, Tapine and Hodgson.

Finally, the strategy of having two hookers, Hodgson and Starling, on the field at the same time has been a masterstroke with Starling’s defence and pace from dummy-half giving the Raiders a new dimension, especially in attack.

There is now a belief within this side that anything is possible.