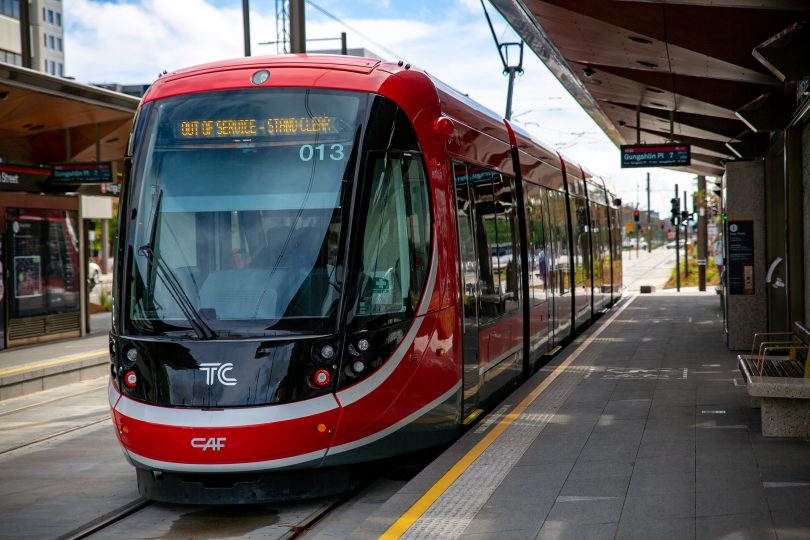 Public transport patrons have been left standing in the cold this morning after light rail vehicles failed to show up on time at their stops due to a “technical issue on the alignment”.

A Canberra Metro Facebook post this morning said due to a technical issue, the service experienced reduced services across the alignment on Thursday morning (30 May). Action buses were sent to various stops to provide people with public transport to their destination.

Canberrans took to social media to vent their frustrations, with one man saying he was left waiting at Macarthur Avenue stop with no communication at all.

Daniel Hooper said he waited over half an hour and only two “jam-packed” LRVs arrived, forcing him to call an Uber to get to work on time. However, he still got charged his fare when he tapped off.

Another person waiting at Mapleton stop in Harrison said there was no announcement at his stop about the delay and it wasn’t clear buses were being provided.

“People were told by a staff member in passing, people ran to the bus stop and then a train came. This was a shambles this morning,” he said.

“How about announcing that at the actual stops? People have no idea what is going on!” another disgruntled patron posted on Facebook.

“Do we get a free ride today after having tapped on early and having to wait for a delay and then cram onto overcrowded trams???” another person posted. 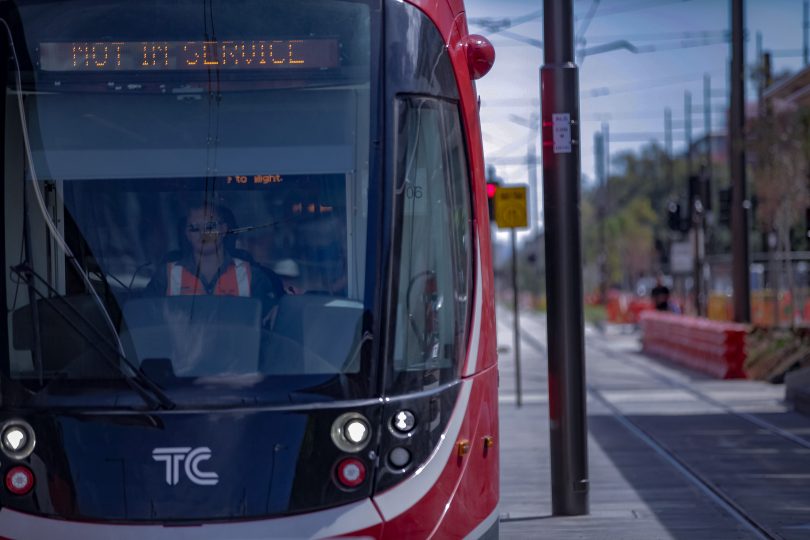 Delays were experienced this morning due to a technical issue on the alignment.

This morning’s delays come just days after a light rail vehicle broke down in the middle of its journey on Tuesday night (28 May).

Around 8:40 pm, a light rail vehicle experienced a “technical issue” near the intersection of Swinden Steet and Northbourne Avenue, a Transport Canberra spokesperson said. The vehicle was unable to continue its northbound journey to Gungahlin, impacting services on the network.

“Maintenance crews supported the vehicle back into operation and successfully reinstated full services,” the spokesperson said.

“We regret that our passengers travelling on the light rail system were delayed as a result of this issue and we apologise for any inconvenience caused to our customers,” the spokesperson said. “Passengers were informed through announcements and updates to the passenger information displays at stops and on board the light rail vehicles.

“Canberra Metro is now reviewing our procedures and response to Tuesday night’s disruption with the aim of always improving our service to customers.”

I didn't notice a thing, caught the LR from Watson, some time around 0810 or so. Was in the office before 0830, which includes a 5 or 10 minute walk. Tram wasn't even particularly full to my eye.

Michael MacWilliam you there! Stop being rational! Stop it! 😂

Jacob White heaven forbid anyone have a perfectly fine commuting experience while there's chaos on our tram network!

Anyone out there have updated travel times across the network?

That's a Labor Government, and they say it's under Budget..Not so as a lot of tradies haven't been paid until after the Budget.

Clearly you don’t know who built it and how it has been financed.

I’ll give you a hint. It is a private company that is building and running it. Government just pays them a couple of up front payments (which don’t cover the full cost of construction) and then an annual fee for 20 years which covers the remainder of the construction cost and running costs.

Our Taxes pay for this and the government hasn't paid there full amount to the Company as yet.

We all know it’s a great service as that’s what they keep telling us .

CanTheTram pointed out this weakness of trams.

That was cheeky, Dan Backhouse.

I was thinking that “Stuck in the Middle with You” – (Stealers Wheel) would fit also.

Sad to say I’ll probably never have the pleasure of travelling on light rail in Canberra.

Either the Grim Reaper will come for me or I’ll get smart and escape to warmer climes.

I was getting a warm feeling from the effects of global warming but then winter arrived. Tricked again!

Yes, there is a “technical issue on the alignment” and there will be many voters having an issue on their alignment.

Havok you say? Wish I was there.

Highlghts the inflexibility of light-rail when something goes wrong it all goes wrong. The government would be irresponsible to extend it to Woden without analysis. Bus based public transport framed around a busway is likely to be a more cost effective option. Why won’t the government do the analysis? Arrogance? Incompetence?

What does “across the alignment” mean? Could CMET perhaps try communicating in English in future?

Rachel the city came to a stand still

Sydney new tram has had bigger failures. It happens with new stuff

Big change in technology. All new things have teething troubles for a while, doesn’t matter what it is

“A Canberra Metro Facebook post this morning said due to a technical issue, the service experienced reduced services across the alignment”

Run that backwards through Google Translate and you’ll get The Collected Haiku of Scooby Doo.

I am no engineer but they did allow for this didn’t they?? So please tell me they designed the system so that if a train breaks down, others can cross onto the other side at certain points so they can keep the network running. Otherwise one failure breaks the entire network. Please tell me they did this. Please!!

I think the answer to your question Ken Zo is "No" they did not design the "system so that if a train breaks down, others can cross onto the other side". And so "one failure breaks the entire network".

With the cancellation of the parallel bus routes, that makes public transport users from Gungahlin heavily reliant on a single fragile system.

Ken Zo one would hope so, a pretty basic and likely event, a breakdown! Maybe they employed some schoolkids to design the system?

Ask people in Melbourne what happens. An average of three cars hit by trams per day. The line then stops for over an hour.

Ray Polglaze I hear of these things called ‘Buses’. This new tech can apparently overtake broken down things and can even deviate off their path if need be. They’re amazing. Possibly in 10-20 years or so government might have the budget to take this extraordinary tech up and explore ways to improve on these problems they’re facing.

I agree...this whole thing is insanity.

My daily tram experience is positive however there needs to be better comms to all stations about delay times (either on screen or PA) for those people waiting remotely in the middle of Flemington or Northbourne.

They couldn’t get the bus schedules right, how would anyone expect them to get LR working properly. Lord forbid what happens with stage 2 if at all.

Maya123 - 44 minutes ago
I see plenty of cars left on verges at the end of the car trip, and they take up more room :D View
Alan Fish - 1 hour ago
The most annoying transport type in the ACT is the average ACT driver. View
Ian - 1 hour ago
While I see plenty of under-age and helmetless riding of scooters, I can't say I've seen much irresponsible riding. My only r... View
News 59

chewy14 - 2 hours ago
Capital Retro, Except all evidence at present is to the contrary. The only large scale batteries connected to the grid are ma... View
Opinion 8

Brian Evans - 3 hours ago
I live in an Enrico house and it is, day to day a wonderful experience. View
Food & Wine 18

dolphin - 5 hours ago
you're wrong o1l. this issue is one of demand and supply not local taxes. View
I am a Rabbit™ - 7 hours ago
The ACT already has the highest average yields after costs out of all capital cities. Basic economics will tell you that rent... View
show more show less
*Results are based on activity within last 7 days

@The_RiotACT @The_RiotACT
Readers are evenly divided over new plans for annual dog registration. Do you think people should stay in public housing long term, or make way for those with more urgent needs? https://t.co/vOwRvSCjIt (3 hours ago)

@The_RiotACT @The_RiotACT
Along with #AnzacDay events for the long weekend, there's plenty happening all week to keep you occupied https://t.co/sPy9XaXww0 (4 hours ago)

@The_RiotACT @The_RiotACT
The ANU is offering to use its residential facilities as a quarantine for returning Australians and up to 3000 international students after the ACT yesterday ruled out taking further repatriation flights https://t.co/bTvrXZMti7 (6 hours ago)