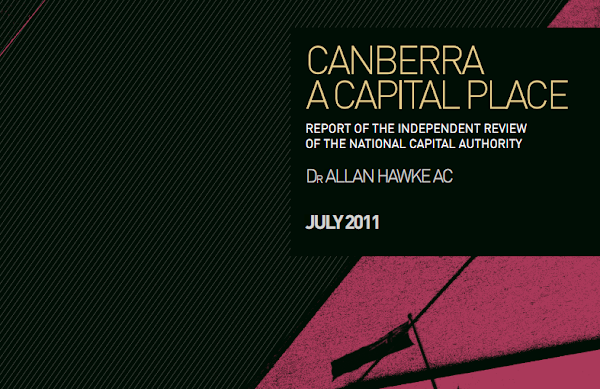 Simon Crean has announced the release of the review of the National Capital Authority by the king of reviewers, Dr Allan Hawke.

“Dr Hawke’s report provides important advice on how we can achieve this in the lead-up to the Centenary of Canberra in 2013.”

The report’s recommendations include:

— Simplifying the planning system and better recognising the role of the ACT Government;
— Options to enable the NCA to operate under existing resources;
— Developing a five-year plan of information and education activities; and
— Reinforcing the NCAs recent improvements in public accountability and refines its role in fostering awareness of Canberra as the national capital.

The report itself has this to say:

The inescapable fact is that the NCA is not ?nancially sustainable under current funding levels. The abolition of an entire function and/or a major change to the form of the agency would be required to achieve sustainability within existing resources. This would be perceived as an abrogation of the Commonwealth’s responsibility for the national capital.

Which doesn’t seem to be what the Federales want to hear.

— Senator Humphries says the Government must up the funding (at considerable length).

Yep, not what our visitors on the hill wanted to hear but it’s a straight down the line, factually blunt report but don’t expect much in the way of a response with concrete actions. Unfortunately to vast majority of them were just another fly-in fly-out community.

It may be of interest that the controversial WW1 & WW2 Memorials at Rond Terraces have their location & character approved by the Canberra National Memorials Committee (CNMC). The site is reserved until 31 Dec 2013. Public consultation, in future, is recommended

Joe Zuzek - 50 minutes ago
SP Brogues They are recyclable and I believe most parties will recycle their signs. View
Jason Preston - 1 hour ago
Thank you for the election proliferation of corflute signs I’ve got enough stakes for my tomatoes now 🤪... View
Margaret Edwards - 4 hours ago
Lynda-Maree Morgan I have enjoyed having candidates knocking on my door. It has allowed me to discuss policies and to make su... View
News 40

Mac John - 6 hours ago
Election matters: Challenge to Candidates: How about limiting the number of terms to two and get fresh (first time) candidate... View
Colin Vivian - 15 hours ago
Anyone over 50. Letting contracts to remove trees in Parkland before public consultation was held then announcing works six m... View
Robyn Holder - 18 hours ago
Steve Wood and there you go with the rightwing thinking of how to disenfranchise people. Congratulations. View
Community 1

Alecia Bee - 11 hours ago
C'mon Canberra! Someone must be able to help these wonderful people! View
ACT Election 73

George Watling - 15 hours ago
Bill Gemmell Very witty 🙂. A chance find of the yellow stuff would be good for the current government it would save them a... View
HiddenDragon - 18 hours ago
The 2019-20 Budget Review released in February showed net Territory debt of $5bn by the end of that financial year - so even... View
Julie Macklin - 18 hours ago
Colin Vivian, The bridge replacement was a suggestion from the Federal government, not local. Now it's not to be replaced, bu... View
Property 14

With heavy traffic expected to start building around the South Coast holiday hotspots this afternoon, motorists are being warned to...
Food & Wine 24

I am thrilled when I spot the shining blue beacon that is the Short Eats Sri Lankan Food Van atop...
News 40

Canberrans will soon be able to fly direct to the holiday destinations of the Sunshine Coast and Cairns, and direct...
News 53

A network of more than 150 km of mountain bike trails near Mogo will be a game-changer for the South...
Breaking 0

One day a week of free early learning for three-year-olds and 400 more teachers and support staff for ACT public...
ACT Election 58

The indicators are all there: an abundance of corflutes on the roadside, piles of political flyers in your letterbox, being...
News 40

@The_RiotACT @The_RiotACT
It's spring, and time to get the veggies growing (although hold off on those tomatoes). But how do you plant a vegetable garden? Kitchen Gardener Joyce Wilkie will get you started https://t.co/mhO54owaeP (1 hour ago)

@The_RiotACT @The_RiotACT
Canberra's legal graffiti sites is a success story that keeps on growing. Three more sites have been added, making 30 across the ACT. Find out where the new locations are https://t.co/Yqzb3bRn3n (3 hours ago)