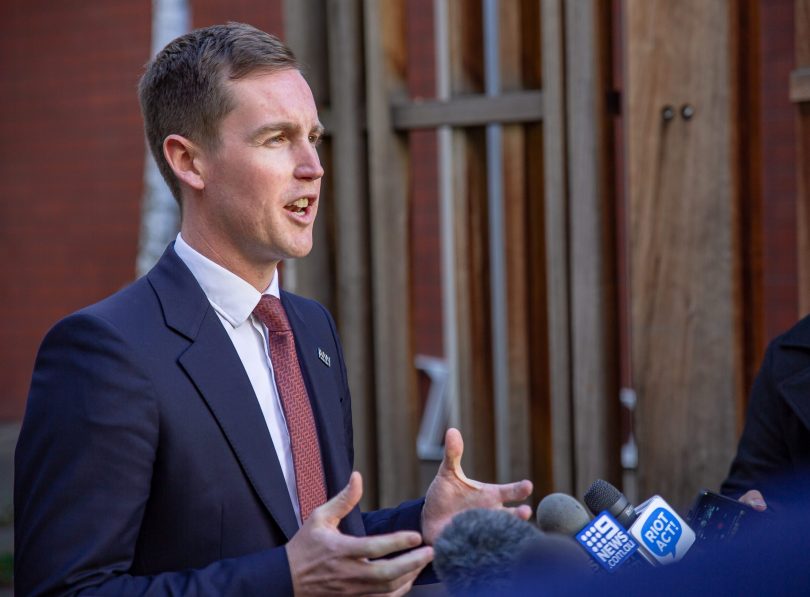 “One of the best things about Canberra is our proud multiculturalism and there must be zero tolerance for any form of racist behaviour,” Minister for Multicultural Affairs Chris Steel.

An increased number of reports of racist and discriminatory remarks in Canberra have been received by the ACT Human Rights Commission during the COVID-19 pandemic.

ACT Discrimination Commissioner Karen Toohey said the reports have involved racist or discriminatory remarks against health workers and retail staff, as well as residents in apartment buildings and communal areas of Canberra.

Commissioner Toohey said these types of actions have a profound impact, especially on the most vulnerable in our community.

“Canberrans value our safe and inclusive community. Incidents of racism and discrimination make people feel afraid in a community which they have often belonged to for decades,” Commissioner Toohey said on Thursday (23 April).

Minister for Justice and Mental Health Shane Rattenbury condemned these incidents and called on Canberrans to support each other.

He said the increased number of reports showed that some people were fearful of their wellbeing, but there was no place for racism in the community.

Mr Rattenbury also alluded to the language being used by US President Donald Trump as unhelpful and furthered people’s fear of each other.

“The language we all use is very important in shaping the community’s feelings about how we see each other and the language coming from the US is unhelpful.

“Canberra is a welcoming and inclusive community. We have people from all over the world living here and that is a real strength of this city,” he said.

Mr Rattenbury said while the majority of Canberrans have supported each other through the coronavirus and the summer’s bushfires, he encouraged people to speak up and intervene should they see any instances of racism or discrimination, so long as it is safe to do so.

“If you don’t feel safe, just stand and bear witness – you may get a chance to show your support afterwards.

“Perhaps the thing that is most important in a time of crisis, like now, is that we look after each other and remain a kind and caring community. Racism, discrimination and vilification, in any form, are simply unacceptable,” Mr Rattenbury said.

“It’s incredibly disappointing and dismaying to learn that at a time when we’re all grappling with the impacts of a global health pandemic, some are resorting to appalling racist behaviour.

“For business owners and others offering services, please do what you can to ensure you offer a safe and supportive space.”

Mr Rattenbury said the Human Rights Commission can offer advice and materials to people affected by racism or discrimination.

“I’d also encourage all Canberrans not to just stand by and let racism go on,” he said.

“If you happen to be nearby when someone is behaving in a racist or discriminatory way, speak up if it’s safe. Speak out. Speak on behalf of the overwhelming majority of the Canberra community who know that racism is just not on.”

In the ACT, it is against the law for someone to discriminate against another person because of a characteristic that you have, or that someone thinks you have, in an area of public life such as employment, education, provision of goods and services and accommodation.

It is also against the law for someone to sexually harass, vilify or victimise.

Minister for Multicultural Affairs Chris Steel said that Canberra is a proud multicultural city and that efforts need to be made to maintain a cohesive community.

“One of the best things about Canberra is our proud multiculturalism and there must be zero tolerance for any form of racist behaviour,” Mr Steel said.

“We are going to get through this difficult time together, not by vilifying each other.”

Minister Steel said that a National Anti-Racism Strategy is needed, and was called for by participating ministers at last month’s National Multicultural Ministers Forum, which was the first since 2010. The Australian Government did not attend.

“More than ever, there is a need for national leadership and a national anti-racism strategy with an effective campaign to address racism,” Mr Steel said.

I think it’s completely wrong to discriminate with false and unknown assumption given the multicultural and multi-ethnic history.

At the same time, it’s biased and unhelpful from the Greens to also take an extremist claim aligned with far-left politics that Trump is being racist about wording of the virus when there was no issue with vast amounts of virus names historically related to places of known origin, such as Spanish Flu, German Measles and Ebola, for example.

I believe balance is the best way to counter unwanted extremist sentiment from both sides of the spectrum.

tim_c - 10 minutes ago
It doesn't matter how much the fine is when there's such a low risk of actually incurring one. That's why you still see so ma... View
tim_c - 25 minutes ago
That just replaces one threat with a bunch more... unrestrained dogs, inadequately restrained dogs (on leads that extend seve... View
tim_c - 44 minutes ago
It's not really that illogical - those who have the potential to inflict the most carnage have a greater responsibility to be... View
Community 12

Brianna - 13 minutes ago
For all those who do want to help out, please consider talking to your neighbours that have over grown yards to find out if t... View
tim_c - 59 minutes ago
I think all the ACT Government maintenance people are still working from home... over 4 months ago I reported some severe dam... View
babyal - 3 hours ago
Ken Behren CR is correct the legal issue if something were to happen would be so not worth the trouble. you want to change le... View
Community 2

Amy Wald - 18 hours ago
Shay McAuley time to upgrade to the newer version of yours. View
Public Sector 4

@the_riotact @The_RiotACT
A new report from @YWCACanberra has revealed 48 per cent of young #women have experienced some form of #sexualharassment, and COVID-19 has exacerbated economic inequality for women in Canberra https://t.co/E63Hq95nxU (21 minutes ago)