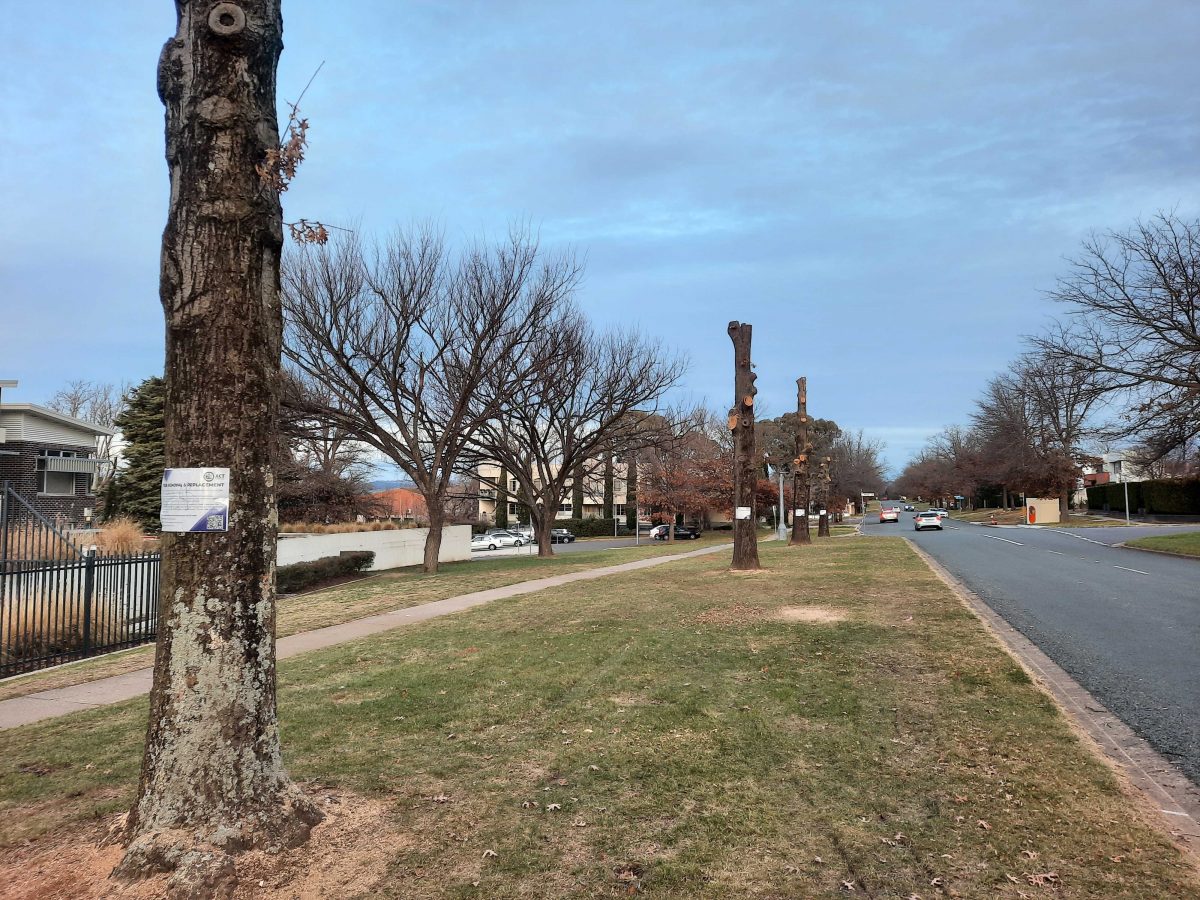 The stark sight of pin oak trunks in Stuart Street, Griffith. They will be replaced in coming weeks with young trees. Photo: Ian Bushnell.

It’s a confronting sight but one Canberrans should get used to as the much-loved trees in the older suburbs succumb to a combination of old age and disease.

The line of remnant trunks along Stuart Street in Griffith is a stark reminder that all things must pass and of the transition many of Canberra’s most memorable streetscapes are undergoing.

The towering pin oaks of Stuart Street and their seasonal canopies are a joy for residents and visitors alike but this month 11 of them were identified for removal and replacement.

The odd one has been taken down and replaced in recent years but the number the City Services’ Urban Treescapes team have had to deal with this month has meant a dramatic change for a part of the street.

It’s a heartbreaking but necessary job if Canberra wants to keep its urban forest and all the benefits it bestows on the city.

Director Policy and Planning Carma Sweet says 11 pin oaks need to be removed and they will be replaced in the next few weeks with young trees about two and half years old or three metres tall.

They are about 80 years old although in American forests pin oaks can reach 120 years in age. 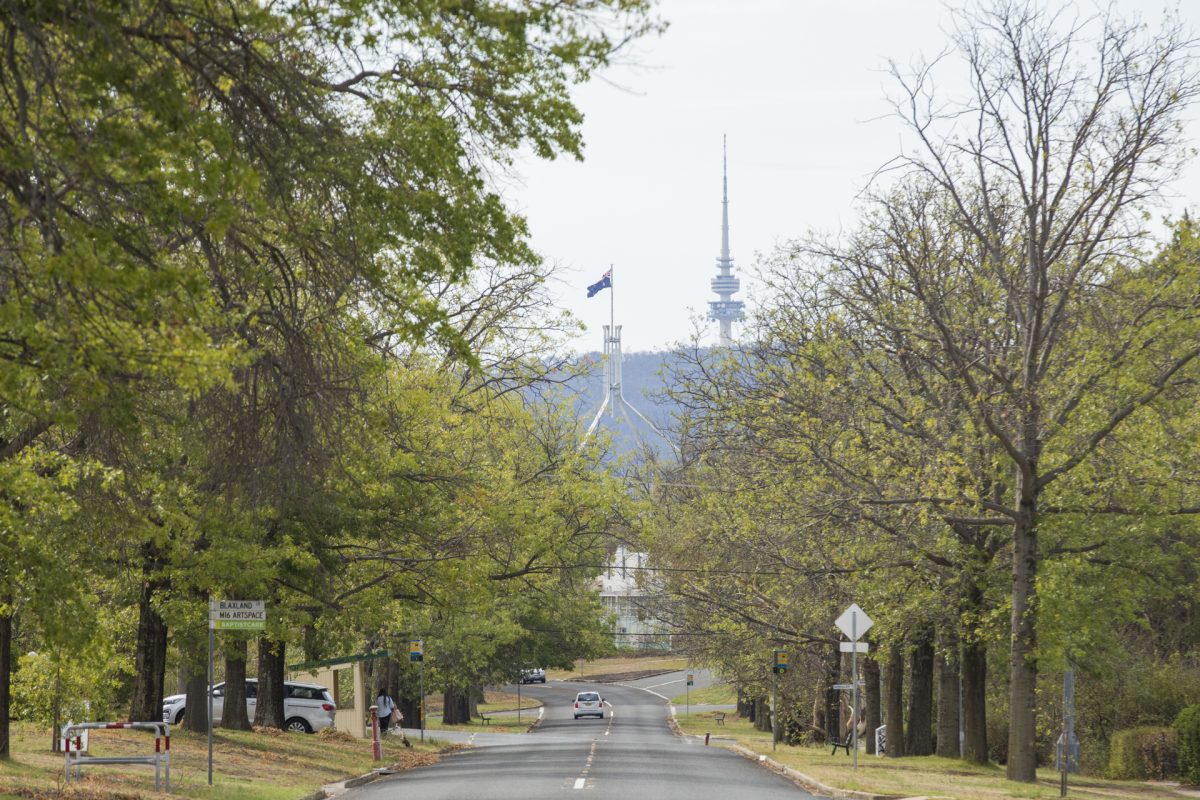 The pin oaks of Stuart Street in their spring garments. Photo: Region Media.

But Ms Sweet says that in Canberra’s urban environment they reach their peak about 60 and then decline after that, due to such things as compacted soils, service upgrades and the effects of infill development.

“Those kinds of impacts, cumulatively affect the overall health and vigour of all trees in the urban environment,” she says.

“So we do find that in the urban environment, trees are often not as tall or as large as they would grow in the natural environment. They don’t live as long as they would.”

Pin oaks in particular are susceptible to dieback and after a certain age do not recover well from damage or pruning, allowing funguses to cause the rot that eventually kills them.

Other streets badly affected are Fawkner Street in Braddon where 22 pin oaks have been removed and Torrens Street, where a large number will be taken out in the next stage of the ongoing renewal project.

Other species on the team’s radar include the blue atlas cedars of Yarralumla and the iconic claret ash, which are suffering dieback.

“So that’s also on our agenda, on our to do list to explore and investigate and create a plan for renewal of those streets,” Ms Sweet says.

Native eucalypts in Tuggeranong and Belconnen are also on the team’s watch, such as those suffering cockatoo damage or species that drop their limbs and are no longer appropriate for an urban environment.

“So we’re paying a lot of attention to those areas where we’ll also need to review our native trees,” Ms Sweet says.

This financial year the team will use spatial mapping to capture all the data related to the urban forest to produce an updated urban forest profile to help manage those ageing streets.

“It will allow us to really make a plan for the renewal of those streets, as we do aim to stage the removals as much as we can so that we can reduce the impacts on the streetscape as a whole,” Ms Sweet says.

“It’s also important to look at the character and the theme for the different regions and the different priorities or considerations for each of those different regions across Canberra and prepare a plan that’s based on data, but also the quality and the values of the spaces and work with the community to ensure that we’re renewing what we currently have and that we’re constantly improving the forest.” 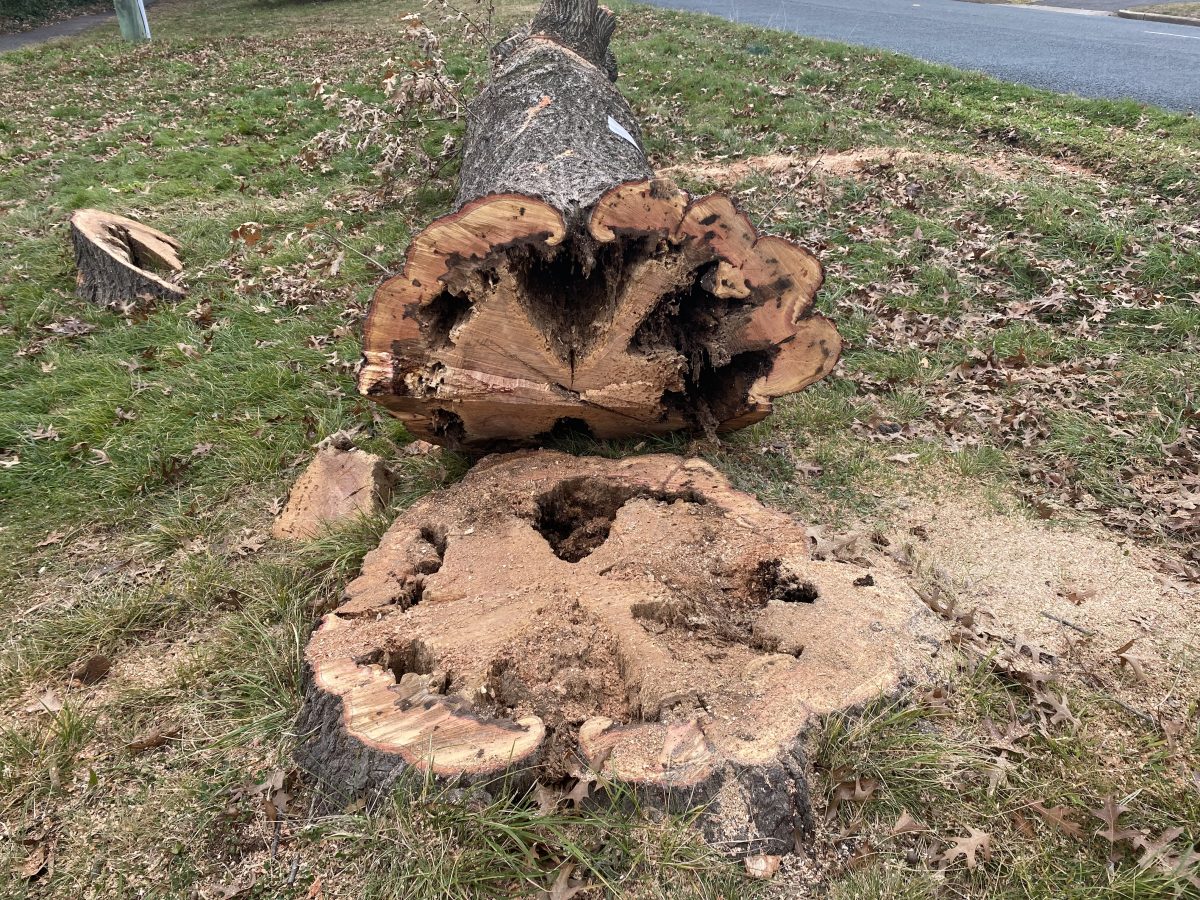 The rotted trunk of a pin oak shows why the tree’s time has come. Photo: TCCS.

The aim is to replace like for like but if a species is no longer performing due to a variety of reasons such as the warming climate or now being considered a weed, the team will look at an alternative of similar character.

“A lot of our trees are now mature, over half of them and this is going to be something that we’re facing over the next two or three decades,” Ms Sweet says.

“And we’re going to need to be removing a lot of those trees because they’ve reached end of life and then we will have a younger streetscape. But in 20 or 30 years they will be at their prime of life again and that’s part of the ongoing renewal and care of the urban forest.”

Ms Sweet says as lovers of trees the team faces tough decisions and are pained at having to bring down a tree that has been keeping watch over a suburb for decades.

The trunks have such a presence and the branches particularly the pin oaks have such dense foliage, Ms Sweet says, and then there is the wildlife the trees support such as possums.

In Stuart Street the team erected possum boxes to give them some alternative accommodation.

“The whole thing is just really sad,” Ms Sweet says. “We, as managers of the urban forest, really love trees and we are very reluctant to remove trees and when you have a beautiful 80-year-old tree and you feel like there is no choice but to see it removed, it’s a hard decision to make.”

The trunks will be moved to TCCS wood yards and timber that is not decayed can be used but is subject to strict procurement rules, so an auction process is being set up for people such as woodworkers.

But the team also hopes that any usable lumber can return to its former home, perhaps in the form of seating, to show the ongoing lifecycle of the tree.

For the sake of peoples Solar panel energy efficiency and their access to winter sun in Belco and Tuggeranong, don’t replace their poorly thought out 1970s Eucalypts if they’re within 25m of a house.

There’s better trees, native or not.

Thank you for this article advising what is happening.

I love walking down Stuart Street and was wondering what the heck was happening to those beautiful Pin Oaks. These trees means so much and are so important to the bush capital. Like the old song goes, don’t it always seem to go, that you don’t know what you’ve got ‘til it’s gone…

Is there any register for tree age?

“Native eucalypts in Tuggeranong and Belconnen are also on the team’s watch, such as those suffering cockatoo damage or species that drop their limbs and are no longer appropriate for an urban environment.”

Will this common sense approach be extended to approving the lopping or removal of protected trees on leased land – or is it OK for limbs to drop when the ACT government is not directly liable for injuries and damages which result from that……?

I wish they’d cut down my neighbours trees

I would love to know why 10 mature street trees were removed and not replaced on Cooyong Street near the Tax Office about 12 years ago. I was told it was because a DA had been submitted, although no work has ever occurred. Besides, why do street trees have to be removed before an adjacent site is redeveloped?

I think way more are got rid-of than are planted. They get in the way of developers making money from every square inch of land, and people seem increasingly terrified of trees. Gungahlin, the treeless desert of roofs, is their idea of paradise.

The Government has never planted trees in streets in outer Belconnen, such as Flynn.
It is nice to see trees in inner Canberra being replaced by the Government.
But folks in other suburbs, such as Flynn, would like to be included in the “Urban Canopy”

Would be nice to have planting weekends and adopt a tree initiatives. As Weston’s plantings age out, we need to plant thousands to keep our canopy.

Beth Mansfield they should have replaced every second tree years ago, instead of killing a bunch all at once. 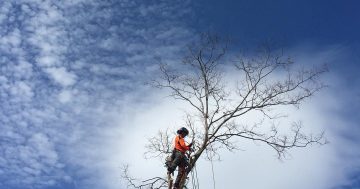