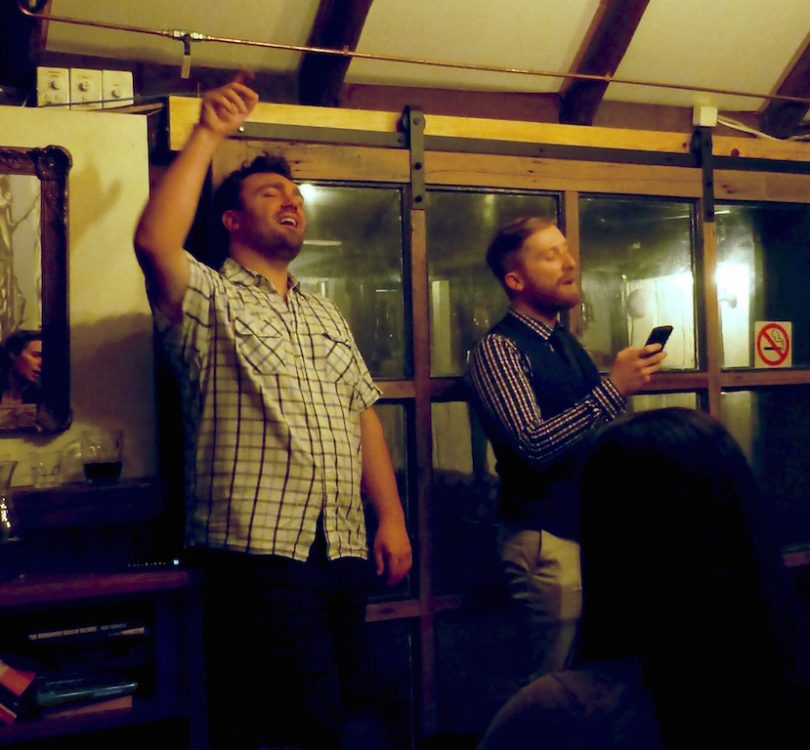 Now, if you sang those words and imagined yourself sailing the high seas with a crew of likely sailors at your call, then the Canberra Shanty Club wants you!

The club may be a tad land-locked from the ebb and flow of the ocean, but that hasn’t stopped a hearty group of singers who gather each week to bring life into a fine shanty or two.

Ewan leads the growing group of shanty singers, who now meet weekly at the Old Canberra Inn for about two hours on a Monday night.

The Canberra Shanty Club sang its first auspicious calls in December 2017 and the response since has seen a wave of singers of all ages and backgrounds join in.

The group regularly gets between 30 and 40 people each week, even in the middle of winter on a Monday night. Someone leads a shanty by singing the verses, someone keeps time with a foot and everyone joins in for the chorus.

The result is a spectacular harmony of tenors and sopranos, and others who prefer to pitch at their preference. They sing of sugar cane and rum, Galway shale and Liverpool town, cooks in the galley and a captain in his quarters, with a bit of Irish turf and tatties for good measure.

The Canberra Shanty Club sings songs of sugar cane and rum, Galway shale and Liverpool town, with a bit of Irish turf and tatties thrown in for good measure. Here’s a preview of the choir in full voice – and if you think you’d like to join them, new members are most welcome.

This week, Jeff from Western Australia, joined the group while visiting Canberra and heard there was a local shanty club. He said there are lots more shanty clubs in WA, especially in the Fremantle area and down to Albany.

There are also four shanty clubs in Sydney, two in Melbourne, one in Wollongong and one in Brisbane.

Jeff led a shanty called The Sailors’ Creed and had the room in fine voice with the call and response style of singing.

Bruce from Canberra has been singing with the group since it began and says a lot can be said for the value of a community singing together.

“We’re all here having a go and once you start singing, it always lifts your mind and soul,” he says while holding a glass of stout.

“For me, it highlights the spirit of pubs in Ireland and you don’t really see that kind of thing here anymore unless it’s at the end of a night with someone singing Khe Sanh.”

Ewan says a good shanty is not necessarily about life at sea, despite its origins of sailors keeping a rhythm in their duties on a ship.

“It’s about a leader singing the call and the workers following in response,” he says. “They are songs that make the work less monotonous.

“We always encourage new singers to come along and eventually lead a shanty. It doesn’t matter what your level of singing ability is. You will always be supported by everyone else, hopefully in pitch.”

Ewan said the Canberra Shanty Club began from the late-night singing sessions at the National Folk Festival in Canberra. The group now conducts shanty singing workshops at other festivals in the area, and a core group from the club will perform at the Merry Muse Folk Club on August 11.

There has even been a request to perform at a heavy metal gig at The Basement in Belconnen, although they’re not quite sure if heavy metal shanties could be such a thing. Watch this space.

You can find out more about the Canberra Shanty Club on their Facebook page or simply come along to the Old Canberra Inn on a Monday night from 7 pm. You don’t need to be able to sing well or know any of the lyrics. They will teach you the parts you need to sing. 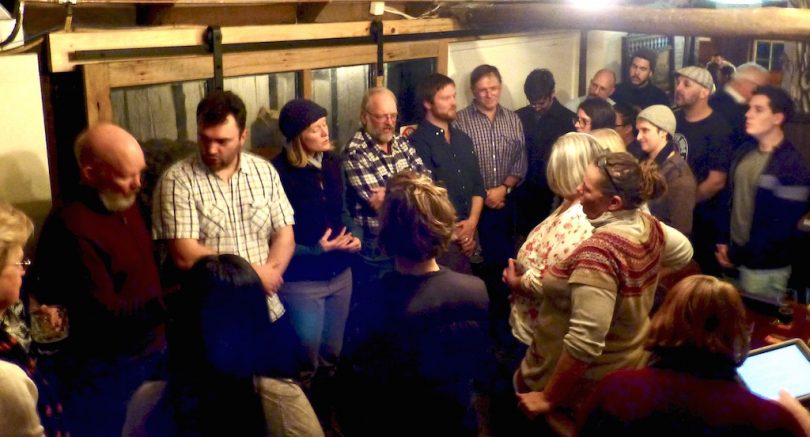 Canberra Shanty Club members gather to bring the tradition of singing shanties to life at the Old Canberra Inn.

Justin Evans - 4 hours ago
Lights, bells and even boom gates aren't going to stop someone if they aren't watching the road View
John MacCallum - 10 hours ago
All level crossing collisions are avoidable. It just takes people to drive appropriately and not be complacent. See and avoid... View
Scott Turnbull - 10 hours ago
Layla Barry Tragic as these accidents are, it is simply not practical to place lights and bells at every single level crossin... View
News 1

ChrisinTurner - 5 hours ago
More people would use the bus if it didn’t get stuck in the same traffic jams. A bus lane is needed urgently. View
News 12

Dean Carlson - 7 hours ago
Don’t let a noisy minority say they're talking on behalf of the town. This school is desperately needed and the proposed si... View
Kristy Norwood - 8 hours ago
I am 100% for the high school and it's location, as for the park it's government owned and they will do as they need, if they... View
savebungendorepark - 21 hours ago
We should be clear. This isn't about "us against them". Virtually everyone who's campaigning to save the Park supports a high... View
News 8

rationalobserver - 7 hours ago
Shooting is is the most humane and target-specific means of rabbit control available. It can be done quite safely inside sett... View
Stephen Saunders - 8 hours ago
In O'Connor, the worst infestation is along the Centenary Trail, at Bruce and O'Connor Ridges plus adjoining Nobby's Farm. Th... View
Lifestyle 2

Acton - 7 hours ago
Walking or running is healthier and safer for everyone. The worst thing about scooters are the many near misses and dumping o... View
News 54

Ross Collis - 13 hours ago
John Evans definitely! Its never cold in Canberra so this anomaly must be a result! View
News 40

Michelle Vernon - 17 hours ago
Last time I had a doctor's appointment there I had to circle around the block 4 times and ended up parking on a residential s... View
Sport 12

Mark Supple - 21 hours ago
Brittany Ashleigh how did they miss u guys ????? Outrage View
News 34

Juliet Lautenbach - 21 hours ago
Meryl McKerrow I’m actually agreeing with you regarding those who cause the crashes. What I’m saying is that the slower s... View
Pete Notso Fatso - 22 hours ago
Once upon a time cars were sold on things like “power assisted disc brakes” or “RTS”. Nowadays it’s Apple CarPlay a... View
Steve Jones - 23 hours ago
Richard Watts that was on a straight bit of road........ View
Lifestyle 1

Michelle Taylor - 22 hours ago
Great article Rachel! I can’t wait to see this 😍 View
show more show less
*Results are based on activity within last 7 days

It's no secret to locals that the Garran shops are thriving at all times of the week. But business owners...
News 86

Europe’s most famous food markets are the blueprint for a multi-million-dollar redevelopment of the Belconnen Fresh Food Markets, which aims...
Opinion 36

@The_RiotACT @The_RiotACT
Finding peak hour a nightmare in Weston-Molonglo? TCCS is on it. Check out what's planned https://t.co/b3YAnGPrV6 (1 hour ago)

@The_RiotACT @The_RiotACT
Researchers have discovered that the waters around popular holiday destination Narooma are a troubling barometer of climate change https://t.co/vbHjduTT7O (3 hours ago)