Helena Pop Dissect Their New EP ‘You Said You Loved Them’ 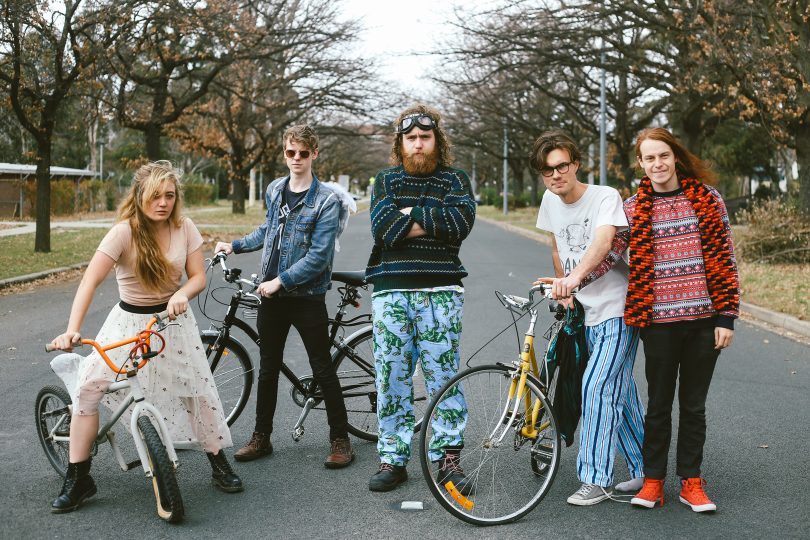 Helena Pop have been around for a number of years now and have become Canberra’s premier indie-folk darlings. Known for combining emotional optimism and unbridled wit, Helena Pop tell stories through a uniquely Australian lens. The band released, You Said You Loved Them, earlier this year and it is, arguably, their most accomplished work to date. Featuring the single, “How To Do A FOLEY Break & Repair Yourself”, the EP’s compositions feature cheeky acoustic guitars, shout-along mantras, saucy strings and an ambitious juxtaposition of electronic and live drums.

Filled with close-to-home stories and personal jokes, we thought there was no one better to break down You Said You Loved Them than the band themselves. So to give us a more informed insight into their latest EP, here is Hayden, Jack, Dan, Ben and Ella themselves.

This song brings up a lot of mixed emotions. It’s the oldest song on the EP, but for me its meaning has changed a lot in recent times. This song was originally called “Capes Days”, and we still call it that a lot of the time. Capes was a band that we played with dozens of times and they represented the community we grew up in as a band. They’ve since stopped being active for quite sad and destructive reasons that have never been made public. And so now the song has taken on this role of capturing a time and environment that we can never go back to – it’s been dismantled and laid bare somewhat. Jack’s lyrics reference cannibalising members from your friends’ bands and the struggle of keeping your creative entity alive in this transient, tenuous community. We all yell a lot when we play it, and that tends to help. – Hayden

How To Do A FOLEY Break & Repair Yourself

The thing that most sticks with me is how this song was written. It was just Hayden and me in a practice room being too lazy to pack up. I wanted to play something silly, so I played the chords that would be the verse chords for the song by going down chromatically. Hayden quickly picked up the beat with a punky feel and I started singing some words I had floating in my head. After a blistering two minutes Hayden asked if we could play it again, so we did and here we are. – Jack

“N260 Bus to Prague” was partly recorded one evening last year on a bus to Prague. Earlier in the day we (Jack, myself and a young Cary Longman) had accidentally caught a bus to Rostock. But the voice you hear is from after that, from when everything was fixed. The rest of the song comes from Ben, who tells me an A-flat and a B-flat were supplied by internet wine glasses, but that there’s more in there too. I really don’t know what. All agree that the song cleanses the ears, and also that it’s hard to justify buying a CD with less songs on it than another one, especially when they cost the same amount of money. It’s for this reason that albums like 69 Love Songs and 50 Song Memoir sold so well, and Vertigo by the Necks didn’t sell very well at all. – Dan

Jack has never told anyone what the perfect post-apocalyptic name is. This is out of the very real fear that when the time comes one of us will turn on him and steal his name and identity. “That’s One Strange Love”, was written shortly after Brexit, the Trump election and Australia’s re-election of the coalition. The song consequently prophesies the end of the world through nuclear annihilation. The song is responsible for the addition of several sounds to the band’s vocabulary, being the first song arranged with Ella Hunt as guitarist as well as our most prominent use of electronic drums and kazoo. The track is also responsible for one of my favourite studio moments. After Jack recorded the infamous kazoo solo. Our recording engineer Louis Montgomery, through a combination of exhaustion and overwhelming absurdity, collapsed on the mixing desk. The perfect reaction to a song about the absurdity of resistance and absurdity as resistance. – Ben

Rhyme Of The Seasick Sailor

To be seasick (as a sailor) is a mighty affliction, and one we can all empathise with. The great ambitions, fancies, loves and grievances harboured by the open sea have no intention to buoy or aid us, nor to ravage or drive us into the bunks in search of a bucket, nurofen or xanax. They in fact lack all intention, being personified weather events. It is this great yet undirected power wielded by the salt waters that a sailor must pay not only respect, but $289.50/w if they wish to keep their cot in the orlop deck and be permitted shore leave to play the reed organ or slide guitar in the winter, as we did, when we recorded this song.

Helena Pop are opening for The Pretty Littles with HYG on Friday 2nd November at UC Hub. Tickets available at Oztix!

Lauren Kay - 5 hours ago
I was gutted when I found out Ash. Nigel was so lovely and it feels like I knew him forever. View
Ashleigh McHugh - 5 hours ago
Lauren Kay isn’t it so sad... View
Lauren Kay - 6 hours ago
Drew Forrest I've got a condolence card, but happy to put more cards in a larger envelope if you or anyone up your way wants... View
News 6