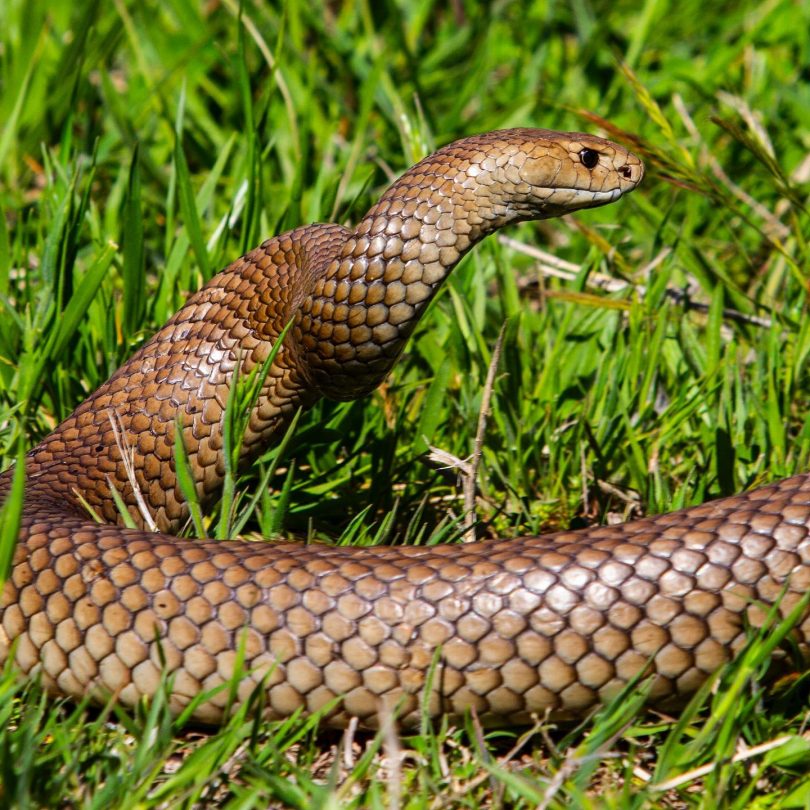 Up close and personal with an eastern brown snake that was recently relocated in the ACT. Photo: Michael Jones.

It’s been a wet, mild summer thus far, but warmer weather means snakes are emerging from hibernation looking for food and water and basking in the sun. And Canberrans on holiday are wandering through the bush, taking hikes through long grass or even just pottering around their gardens.

The ACT Ambulance Service says it has responded to several snake bite incidents at Mount Stromlo in recent weeks, although in each case triple zero (000) was called immediately and correct treatment was applied.

Despite the fear factor, snake bites are relatively rare and research shows that almost all serious bites occur as a result of people engaging in some ways with the snake, rather than leaving it alone. So the first principle when you see a snake is to stop, observe and don’t disturb.

Australian snakes are generally reclusive creatures and biting is a last resort for them. Envenomating another creature is a massive drain on their resources and is their last defence so they won’t bite unless they’re alarmed and stressed. Snakes are also protected native animals so the safest and best approach is overwhelmingly to treat them with respect and leave them alone.

However, snake bites do happen and should always be treated as potentially life threatening for humans and pets. Taking the right action in the moments after a snake bite could be lifesaving, according to ACT Emergency Services.

“If you plan to travel through bush and grassland areas, be prepared and always communicate your travels with family or friends,” said ACT Minister for Police and Emergency Services Mick Gentleman this week.

The ACT Ambulance Service says if you suspect you or your child has been bitten by a snake, you should call emergency triple zero (000) immediately.

“Venom can be fatal if left untreated,” said ACT Ambulance Service chief officer Howard Wren. “Always assume the snake is venomous and apply a firm pressure bandage over the bitten area and around the affected limb, using a bandage or other suitable material.

“Do not give alcohol, food or drugs, and keep the patient still by lying down. It is also critical that movement is limited in an affected limb.

“In some cases, you may experience headaches, nausea and vomiting, blurred or double vision, limb weakness or paralysis, or difficulty in speaking, swallowing or breathing.”

While it’s possible you’ll experience a ‘dry bite’, where the snake strikes without injecting venom, any bite should be treated as an emergency. Dry bites will be painful and may cause swelling and redness around the area of the snake bite, but you can’t tell if a snake’s bite is dry or venomous.

It’s also possible that venom may not take effect immediately so you should always assume you have been injected with venom, and manage the bite as a medical emergency.

Snakebite symptoms include severe pain around the bite; swelling, bruising or bleeding from the bite; bite marks on the skin that can be obvious puncture wounds or almost invisible small scratches; and swollen and tender glands in the armpit or groin of the limb that’s been bitten.

Preventative measures are also worthwhile to keep pets and children safe in your backyard. Keep your yard tidy and well maintained to make it less attractive for snakes to stay or return.

If you do see a snake in your backyard, take pets and children inside and do not attempt to catch or kill it yourself. Take careful note of where the snake is and contact Canberra Snake Rescue and Relocation on 0405 405 304 for assistance.

Canberra Snake Rescue and Relocation is licenced for catch and release of reptiles by the ACT Government.

They forgot the part where you bite the snake back.

Why is it that all the stupid comments about a serious matter come from Facebookers?

This is all good info. I don’t know what the current policy is but when I was in primary school in regional NSW a long time ago we were all instructed on snake ID and how to treat a snakebite. The recommended “first-aid” then was to slash the bite area to induce bleeding and then rub “condy’s crystals” (potassium permanganate) into the bite area. It was also advise to apply a tourniquet to the affected limb well away from the wound. Every household has a “snakebite kit” consisting of a razor blade, condy’s crystals and a piece of rope.

I prefer the current way of treating a bite but prevention through caution is the best medicine.

Wouldn’t be too bad an idea to sit n have a chat with the snake while waiting for help. You can discuss why he did this n how he wouldn’t repeat this in future

Use the snake as a tourniquet on the bitten limb

always wondered how to apply a good pressure bandage solo. ie on ones self.