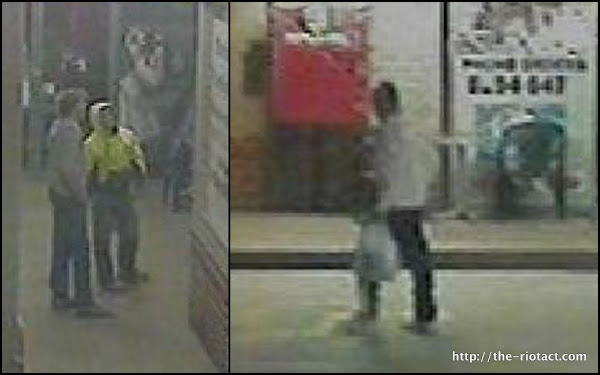 ACT Policing is appealing for three potential witnesses to an aggravated robbery to come forward and speak to investigators.

Police believe that the three men may be able to provide potentially important information as they were in the immediate area when an aggravated robbery took place at the IGA store in Banks.

Around 7:50pm last night (Wednesday, June 27), a man armed with a knife entered the store and made demands for cash. Staff complied with the demands and the man fled the store. Police believe that the three potential witnesses may have seen the man running from the store.

The offender is described as Caucasian in appearance, about 170cm to 185cm (5’7” – 6’1”) in height and was wearing dark-coloured clothing.

At the time of the robbery his face was concealed with a mask and he was carrying a bag.

Police are urging the three potential witnesses to attend a police station or contact ACT Policing Operations on 131 444 to provide their details.

It does puzzle me that CCTV recording/images do not seem to have kept pace with technology in general.

My gut feeling is that any camera system recently installed should be so definative that someone viewing the image would be able to count the pimples on the toe-rags face. And identify them!!!

Totally agree that the quality of these images is rubbish, but it’s worth pointing out that they’re not supposed to be images of the offender. Instead, they’re people that were in the area at the time.

Perhaps our local constabulary are aware that any images of the offender that they might have would be too pixelated to enable anyone to ID them, so they’ve opted to publish images of people that were around at the time in the hope that they might recognise themselves – pixelation or no.

lol, he must be shaking in his boots.

IGA Banks – Now the crims know their CCTV is crap.

When you can get a go-pro camera for $300 that can pick number plates of cyclist side-swiping vehicles, I can’t understand why most CCTV images are so rubbish. This one is digitially zoomed, granted, but even the ones from inside that just film a servo counter look like this.

You will never get them, running around with a pixelated face is the new hoodie.

Where was the security camera? Conder?

2902 - 52 minutes ago
Imagine the money one could make building apartments on this site, right out the front of the proposed light rail track View
ChrisinTurner - 1 hour ago
There is not enough attention to maintaining services in areas with dense populations. The government seems to be working on... View
JS9 - 3 hours ago
I assume there must be some form of contract that requires the pool to be maintained and provided to the community for a mini... View
News 4

Kathy Blunden - 1 hour ago
I was also totally shocked with my electricity bill. It is the highest bill I have ever received and I have solar panels!!!... View
JS9 - 2 hours ago
It is a weighted average across a range of plans - so it means some will go up more, some go up less. Over the basket of plan... View
phydeaux - 3 hours ago
I am surprised that the "11.95%" keeps being repeated without qualification. The following comparison uses data from "ACT Ele... View
News 12

Deborah Gale - 5 hours ago
Nada Krstin The vaccine gives protection and greatly reduce the likelihood of serious disease which is great. But children wh... View
Acton - 7 hours ago
We can’t hide from a virus and although vaccination mitigates the effect on yourself, it doesn’t stop you getting it, or... View
Peter Marshall - 7 hours ago
No Nada, that is not the point of the vaccines.... View
Courts & Crime 1

David Conrad - 7 hours ago
What is wrong with teaching cause and effect to kids? Or probability? So don’t fix it, just do what Canberra does best, put... View
Lifestyle 31

Katie Painter - 7 hours ago
But the fully Vaxxed rate is 93.3% in Eurobodalla, the second highest in NSW as of 25th Oct. And Bega Valley >95% first dose,... View
Monique Perry - 15 hours ago
Ilysha Perry not this article being recommended for me as if I'm not a local... View
News 2

For many, the thought of visiting the dentist can come with a wave of anxiety. But even when you do...
Sport 139

Paid parking in Canberra has been a magnet for controversy and will continue to be so into the future with...
Community 43

@the_riotact @The_RiotACT
Fancy staying in an #historic sandstone residence in the Southern Tablelands with 60 rooms to choose from and no worries about security? Berrima #jail is up for #sale and it's attracting plenty of attention https://t.co/o36Cqikf1E (2 hours ago)