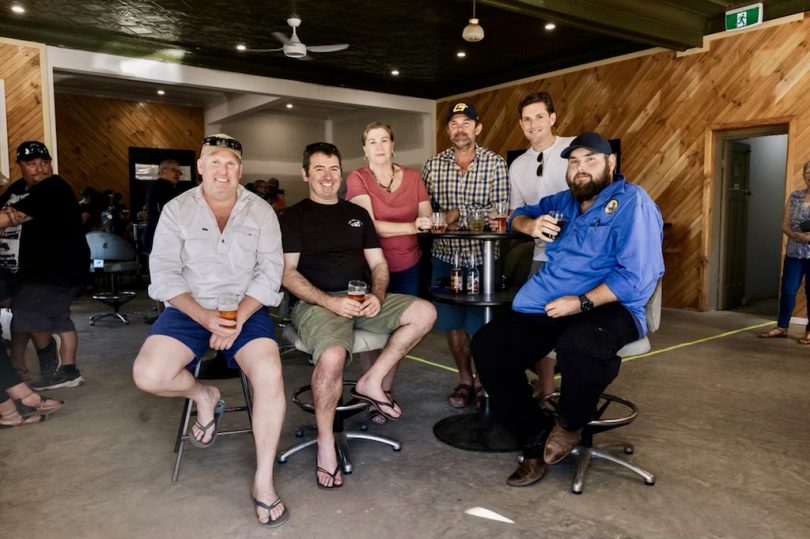 The Grong Grong six who made the reopening of the local pub a reality – by buying it themselves. From left, AJ Gillespie, Adam Ferguson, Gemma Purcell, Reiner Meier, Cain Gawne and Adam Conway. Photo: Supplied.

The noise was deafening at the other end of the Royal Hotel’s phone. The bloke who answered didn’t work there. He’d just come in for a beverage and had been roped in to refill the drinks fridge because business was so brisk.

The Grong Grong hotel, built in 1875, was doing a roaring trade on Australia Day, thanks to a small band of locals who, rather than let their local get sold to outside interests or, God forbid, close its doors forever, bought it themselves.

The locals aimed to raise $500,000 to keep the pub in local hands, with a minimum shareholding of $5000 each. They were overwhelmed with the result – 169 shareholders and $1 million.

For one of the shareholders, Grong Grong almost-local Gemma Purcell (she’s lived in the region, on and off, for most of her life) buying the Grongy pub was “a fork in the road for our village”.

“We had the right team, we were in the right place to flip our economy,” she said. “We could have closed it but instead we decided to back ourselves.

“It’s a real shot in the arm for this place. People here are really proud of what we’ve been able to do.

“There were no grants, no money from anywhere else, I think that’s why everyone has rallied around the shareholders.”

The pub was struggling to survive during the height of COVID-19, having to open and close irregularly because of government restrictions.

“There was a core team of six of us,” Gemma said. “We came up with the idea to buy the pub, put a plan together and presented it to the community.

“There’s a wide range of skills among the six of us, from business, to building, to project management, so we knew we could do it.” 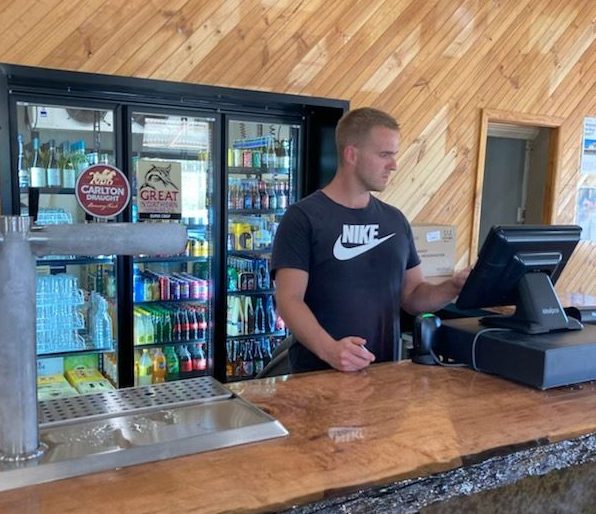 Grongy publican Adam Evans at the bar, which was made out of a piece of silky wood by pub shareholder AJ Gillespie. Photo: Supplied.

What they didn’t know was how quickly and generously their community would respond.

Gemma said they estimated that with $500,000 they could reopen the pub and provide a great service to locals. With the unexpected $1 million raised, they could do so much more, including a total renovation inside, new roof and floors and a new commercial kitchen.

As much as possible, all the work was done locally, again providing valuable income for the small community.

The working bees finished in a remarkable 70 days, with only a few jobs now left to be done.

READ ALSO Hot In the City: SoupStone at ANU serves up a spicy menu with cool desserts

“You could say there was a little bit of pressure for us to open by Christmas,” Gemma laughed.

Gemma said community spirit was responsible for the pub’s doors remaining open. People like founding member AJ Gillespie, who said he had a huge piece of silky oak that would make a great bar counter, so he made one.

Another of the pub’s great supporters is a teetotaller – she just wanted somewhere she could go for a good cup of coffee.

Grong Grong, population 150, is a tiny watering hole just off the Newell Highway which stretches from Brisbane to Melbourne. It’s also a vital link between Wagga, Narrandera, Hay and Adelaide.

The pub was built in 1875 to cater for a then thriving stage coach stopover trade, with castle-like additions built in the 1920s. 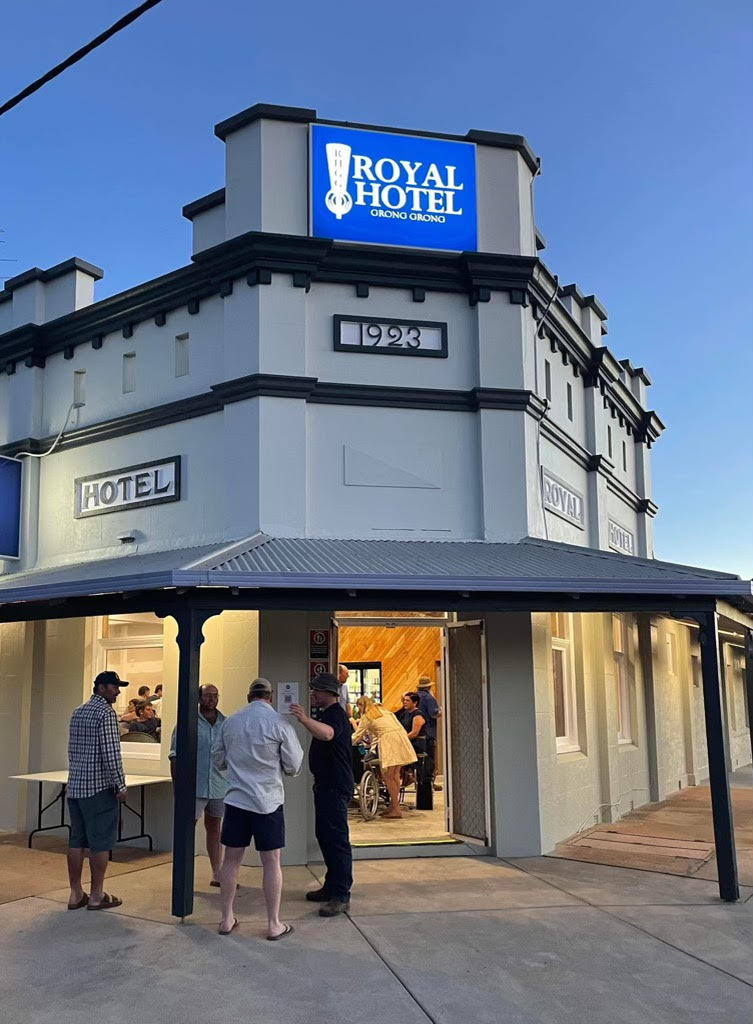 As you enter the village, the sign says “Welcome to Grong Grong, a small caring community”, and thousands of tourists drop by for a cold one on their way to somewhere else. Grey nomads, families with caravans, stock and commercial transport operators.

You know you’re visiting a real country town when they apologise that they can no longer provide free chaff for the horses.

There’s free camping out the back, counter dinners that taste like counter dinners used to, and – if they say so themselves – it’s one of the friendliest little places you’re ever likely to pull into in southern NSW.

Even its history records a penchant for a bevvie or two. Back in 1950, there was a Grongy team in the Austin Cricket Cup. Reportedly, the players pulled out when the opposition decided to get serious and ban “beverages” while batting and fielding.

Trent Pollard Jarrods brother is on the far right haha

Great they’ve brought free camping back. Always a great stop and it was a lifeline for the previous owner.

Your old waterhole Bernie? Thanks for the birthday wishes mate missed you on the day regards Merv

great story that one.

Good shit.. way to go I’ll have to make the effort to make a trip down as haven’t been there since the late 70s

Laurie Nichols to far for triumphs 🖕

Wayne Nichols need to talk to them and also work out time factor to make it in time for lunch..Triumphs no worries we can be there in 5.. Harley’s well what can I say speed factor, loading on ute and the crying over spilt milk all takes time as you know

Thank you for sharing that story, community spirit…love it!

That’s country spirit for you 👍😉🥳

Like a second home! Do they go home to sleep?

Brendan Robson thanks god for that!

Mark Hankinson all I can say is it’s gods country

Mark Hankinson maybe this calls for another camping trip Ben Thornhill you keen ?

Haven’t you been there, Brett? 😉

Never say never to country folk they are bred tough, good luck to all involved.

Sean Walsh why didn’t you chip in

Robyn we need to go to Grong Grong.

Well done to the locals of Grong Grong … my home town 💖