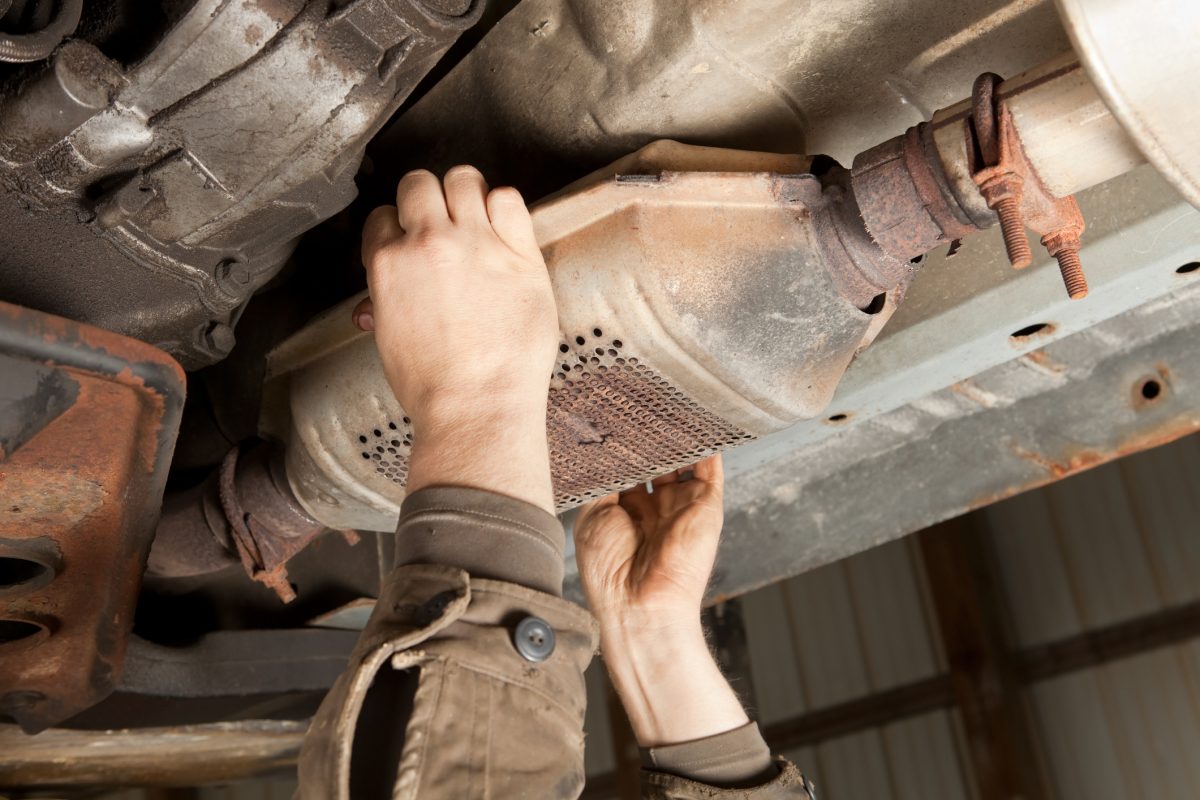 A catalytic converter can contain hundreds of dollars worth of platinum, palladium, rhodium and gold. Photo: File.

Loraine Bryant’s husband clocked off from his day shift at the Canberra Hospital and made his way to the staff car park off Ainsworth Street. He climbed into the trusty Toyota HiLux. All seemed well. It wasn’t until he turned the key and there was suddenly “a hell of a noise”.

“He jumped out of his seat before getting out of the car to discover half his exhaust system was gone, including the catalytic converter and muffler,” Loraine said.

The Bryant family aren’t the only ones to suffer this fate. According to ACT Policing, theft of catalytic converters happen “from time to time” in the ACT.

In early 2021, there was a spate of thefts, but once police identified and arrested a group of offenders, the occurrences dropped off “dramatically”.

So what exactly is a catalytic converter and what could people possibly want with one?

The internal-combustion engines in cars put out all sorts of poisonous emissions. The odourless and colourless carbon monoxide (CO) is the most dangerous, but there are also nitrogen oxides (NOx) and hydrocarbons to worry about. Both contribute to smog and acid rain.

To prevent these gases from ever making it out into the atmosphere, carmakers run the exhaust pipe through a little box of tricks known as a catalytic converter.

This usually sits just aft of the engine and consists of a series of metal filters coated with platinum, rhodium and palladium. Some newer versions throw in gold, which is “cheaper” (that should tell you all you need to know). 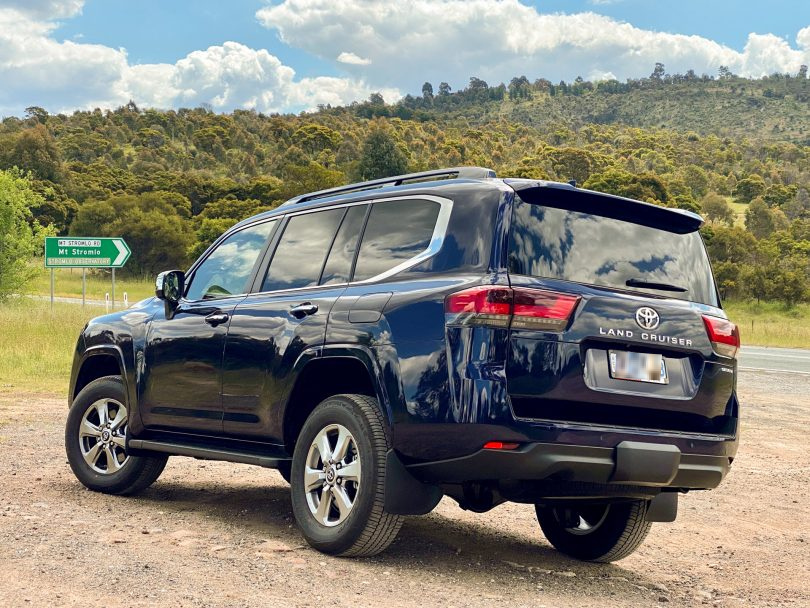 The higher the car, the more vulnerable the catalytic converter to theft. Photo: James Coleman.

Once hot, the toxic gases are burnt away, leaving a mixture of nitrogen, carbon dioxide, and water vapour. This is then sent off to the muffler to be quieted before being let out of the tailpipes.

A modern catalytic converter will also constantly talk to the fuel injection system letting the car’s computer know if too much unburnt oxygen is coming through.

They work exceptionally well, except maybe when they’re cold and everything is passing through unhindered (another good reason to never start your car in an enclosed space).

But it’s those precious metals inside that attract thieves keen to make a quick buck. Even the tiny amounts can still prove valuable when sold to scrap metal businesses, and never more so than now.

Prices for the metals have gone up considerably in recent years as car manufacturers pull out all the stops to meet stricter emissions regulations around the world.

To make matters even worse, Russia is the largest exporter of palladium, producing about 74 tonnes in 2021 and accounting for about 37 per cent of global supply. Oil companies claim the war in Ukraine is flowing through to higher prices at the petrol pump, and it’s likely the crisis will have a similar impact on palladium, which is now trading at around the same price as gold.

This means there’s an increased cost at the same time as increased demand – the perfect recipe for a black market. Cars that sit higher off the ground, such as SUVs and utes, make prime targets as the catalytic converter is more accessible.

Since the Bryants reported the incident, ACT Policing has secured video footage of the theft and investigations are continuing. 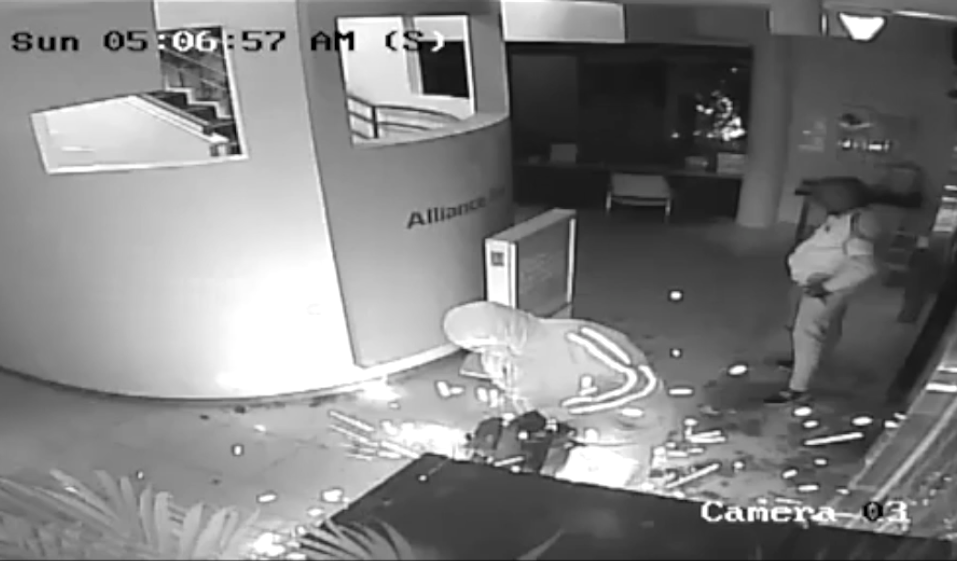 Thieves with an angle grinder during a burglary on 13 September. Photo: Screenshot.

When Loraine dropped the car off at her mechanic for repairs, she was told it was the fifth catalytic converter theft the mechanic had seen that week.

“They seem to be targeting Toyota HiLux utes too, at the moment,” she said.

The repair quote came in at $1600, but depending on the age and type of car, a catalytic converter theft can be the nail in the coffin. Insurance companies may sometimes deem it ‘uneconomical to repair’ on account of the sheer cost of a replacement.

The Bryants are lucky in that they only have to fork out $600 for the insurance excess. Loraine says the inconvenience is the biggest annoyance.

“I know a lot of people only have one car, but it’s a struggle to have to revolve your life around one after having two for so long.”

ACT Policing admit it is difficult to secure a catalytic converter, but your best bet to ensure your car never falls victim is to park it in a gated garage or off the street.

“Try not to park your car half on the road and half on the curb as this will give thieves easier access to the underside,” a spokesperson said.

“Consider installing CCTV at home or fitting your car with a motion-sensitive alarm.”

For everyone else, power tools are generally used to remove the catalytic converter, so if you see someone carrying an angle grinder or powered saw through a car park for no obvious reason, consider it suspicious.

“If you do see someone stealing a catalytic converter, or even acting suspiciously – such as looking closely at or under cars – report it to police on 131 444 when you see it.”

Had my exhaust cut off by thieves in Pickles carpark near canberra brewery on Monday, (frequented by lots of tow truck operators involved in car industry.) How was it that nobody saw or heard two angle grind cuts in broad daylight. I did wonder if it may have been shielded by a larger noisy vehicle sitting nearby ? Vehicle could be off road for weeks ! Dirty thieves

Been going on for years

This is a huge problem. Charities are being affected by it too. The AFP have a duty to find out where all these catalytic converters are going and stop it. Someone is buying them. That person needs to be shut down.

How does no one see or hear some bogan using an angle grinder on a vehicle in a hospital staff car park???????????

Linny Hawkins possibly because that particular car park is quite a distance from homes and the hospital.

Linny Hawkins An angle grinder is the quickest way, but using a pipe cutter is virtually noiseless. It just takes longer. So it comes down to the risk making a noise, vs the risk of being caught in the act.

I can remember this happening a lot in the uk around the recession in 2007/ 2008. Scrap metal yards are all now cashless over there, everything done on account. Trouble is though each yard would take dozens each day from mechanics shops or travellers or whoever and all get bundled in the same bin – how would you know who had weighed in which cats?

There was a local tow truck driver looking to buy these, and prob onselling to scrap metal places.

For cheap security, scratch your number plate onto them, and put a dob of fluoro paint, to help identify yours. Police need to check who is buying them in Canberra (and then onselling to scrap yards).

Brad Bingers who was the towie

Lyn Gill Just search for them. They advertise that they buy these, regularly

They hit a company that provides day programs for disabled people repeatedly a while back.. the vans they use to transport clients were out of action for ages, which meant no one got to go out to places or therapies. It’s disgusting what some dregs will stoop to.

So why don’t the recycling yards that buy the parts/metal give police information of the people buying them?
I know you have to give identification to EzyScrap so I’m sure all other metal recycling places do same.

Frank Calipari I saw a US video saying engrave cats with the last 4 digits of the vin, and spray paint them yellow. As well as to keep your car parked in well lit areas or in a garage.

Frank Calipari as a scrap metal merchant in act I am
Not required by law to do any checks At all, and it’s impossible to do so

Gimli Joe-bob
I did not say scrap metal merchants do checks.
Ezy Scrap ask for your name & contact number to write on the receipt with info of what they buy.
What’s your process when buying catalytic converters or any scrap ?