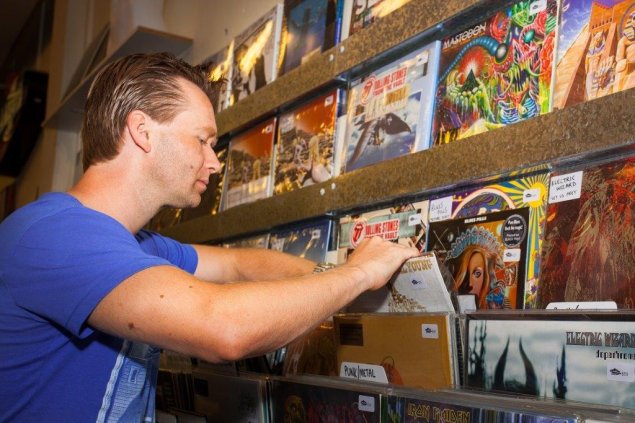 Nick Hornby’s book High Fidelity, and the subsequent John Cusack movie, became an instant classic for a generation that postponed entry into adulthood, or ‘coming-of-age’, from adolescence until middle age.

Local theatre company Phoenix Players is bringing Hornby’s timeless, witty story to the stage. High Fidelity is a rock musical unlike any other. With all-original music inspired by the likes of Bruce Springsteen, Aretha Franklin, The Who, Neil Young, Marvin Gaye – even Lyle Lovett, the music in High Fidelity is not just the vehicle for the story – it’s the point.

If you don’t know the story, Rob, played by Zach Raffan, is a slacker thirty-something record store owner who has just been dumped by his girlfriend Laura. Rob lives life through never-ending Top 5 lists. When his split with Laura doesn’t make his Top 5 Break-ups, he revisits his failed relationships of the past to figure out what went wrong. This journey of self-discovery, fuelled by his obsessive knowledge and love of music, drags­ him – kicking and screaming – into adulthood.

With frequent musical and lyrical references to timeless cultural icons, this show celebrates the power of pop culture with wit, verve and a killer beat. If you love music, are a bit obsessive, have ever wondered why that relationship didn’t work out, or just really didn’t want Taylor Swift to win the Hottest 100, this show is for you.

High Fidelity spins at ANU Arts Centre from 6-21 February 2015. Tickets are $25-$35, dinner and show packages at Teatro Vivaldi are $65. Tickets available at www.phoenixplayers.com.au.

Julie Macklin - 44 minutes ago
Unfortunately I would have to keep my petrol car too, as electric cars can't go where I want to drive. Good for urban areas,... View
Brent Hutch - 54 minutes ago
Even 200,000 cars at a discounted price of 40k per car, will be 8billion. Obviously this number will increase as more cars ar... View
Gloria Altinger - 1 hour ago
Brent Hutch 12km for 675M.. 85 klm North to south... hmm ok so maybe at least a 100K 50k Electric cars to the roughly 260k re... View
ACT Election 21