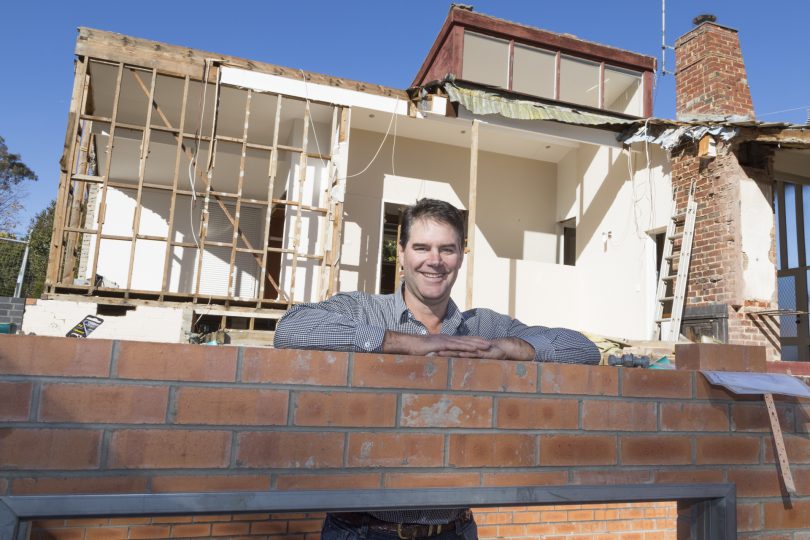 A blindsided Andrew Barr has taken aim at the one-size-fits-all approach of the Federal Government’s stimulus package for the housing sector, warning it was too generous and may jack up house prices.

He also flagged further spending on public housing, calling on the Federal Government to work with the states and territories to boost this area.

The Morrison Government’s new HomeBuilder program will provide all eligible owner-occupiers, but not investors, with a grant of $25,000 to build a new home or substantially renovate an existing home. Construction must be contracted to commence within three months of the contract date.

The program is expected to provide around 27,000 grants at a total cost of around $680 million.

While industry groups welcomed HomeBuilder, Mr Barr said he would have preferred that the Commonwealth had consulted with the states and territories first to design a scheme tailored to the individual conditions of each jurisdiction, and not ”dump and run” and leave it up to them to run the scheme.

He said there was an ”inflationary risk” with the Commonwealth program, ”and that’s why we did not go down a grants path, we went down a tax reduction path focusing on stamp duty”.

”Our scheme is targeted in a more realistic manner, towards the bottom two-thirds of the market,” Mr Barr said. ”The top third of the market is wealthy enough to not need government support in relation to their renovation or home purchasing decision.

”There is an overlapping in the middle but ours is certainly targeted to assist those most in need.”

But Mr Barr acknowledged that the combination of the HomeBuilder scheme and the stamp duty cuts could make quite a difference to the pipeline of housing construction in the ACT, and he would work to implement the scheme as best as he could.

He said that after a lift in government land releases there were also 400 to 500 blocks on the shelf ready for purchase.

”Now is a very good time to buy a block of land in the ACT,” Mr Barr said.

Chief Minister Andrew Barr said a combination of the HomeBuilder and the stamp duty cuts could make quite a difference to the pipeline of housing construction in the ACT. Photo: File.

He said the government would be announcing further significant spending on public housing in coming weeks and called on the Commonwealth to waive the ACT’s historic housing debt and partner with states and territories to build more public housing.

Matthew Hall, whose company Build Professional designs and builds home extensions, said the Commonwealth package would ease the uncertainty in the industry and head off any shortfall in work down the track as a result of the COVID-19 shutdown.

”Clients are more likely to push ahead or factor in some things they otherwise wouldn’t have committed to,” he said.

So far he has been lucky and thanks to JobKeeper has not had to lay off any of his six full-time staff.

He said that ABS data last month showed 1500 ACT construction industry workers had lost their jobs, and under worst-case modelling that could have been 7000.

”It’ll give a big injection of confidence both to consumers but also for the industry, and hopefully help many of those 20,000 people that work in the construction industry stay employed,” he said.

Mr Hopkins said MBA had heard early in the crisis that residential builders were losing forward orders, particularly in the renovation sector.

“For every $1 invested in homebuilding activity, $3 is provided to the wider economy, meaning that this announcement will have a positive flow-on effect to many other industries and will provide a boost for thousands of tradies; the cafes, pubs, and ute dealerships that they frequent; as well as the thousands of building supply businesses that depend on the industry,” he said.

He added that house prices were likely to soften if anything and the Federal Government’s focus was on jobs.

The combined value of the two support schemes was close to the $40,000 homeowner grant MBA had advocated, which modelling showed would support nearly 1,890 jobs, $660 million worth of investment in the ACT and 500 new dwelling starts.

Neridah McMinn - 21 minutes ago
My absolute favourite place for a Saturday morning breaky 💕 View
Graeme Jeffries - 59 minutes ago
I always stop there for a great coffee and toasted cheese and tomato sandwich. A friendly place and service with a smile! May... View
Fran Morrison - 60 minutes ago
Congratulations ! Nice to see these familiar faces . Well done on the service you bring to Queanbeyan. Bruce & Fran View
News 4

Natalee Gersbach - 25 minutes ago
No need yet. Will wait and see if this cooler weather changes that.... View
Chris Threadgate - 29 minutes ago
Arggh I thought it was freezing 🥶 here last night can only imagine there🥶 View
Jackie White - 52 minutes ago
I've had it on nearly 24/7 for a month! #gettingold View
News 83

Jo Hann - 33 minutes ago
Nada Krstin and, addressing your query as to whether they're qualified, there's no cognitive test either. We do not deem an e... View
Jo Hann - 35 minutes ago
Nada Krstin there are 16 and 17 year olds who earn over $18k. The potential to pay tax is all that should be required, though... View
Nada Krstin - 9 hours ago
Jo Hann see my recent post to reply to your "if you pay tax, you should have an option to vote for the government that spends... View
What's On 17

James Hutson - 14 hours ago
Josh Ongley so you’re supporting or dissing me? Hard to tell View
Josh Ongley - 15 hours ago
James Hutson yeah because it’s not important to us In Australia we are a multi cultural society 😂😂😂 View
Food & Wine 7

@The_RiotACT @The_RiotACT
When was the last time you looked for a better electricity deal? New measures will soon make it easier for Canberrans to know when they're being charged too much https://t.co/W5Crpin1a1 (24 minutes ago)