Experts in buying, selling & renting
Your property, your future
16 April 2021

Horticulturalist sees hops in a new light after disappointing harvest 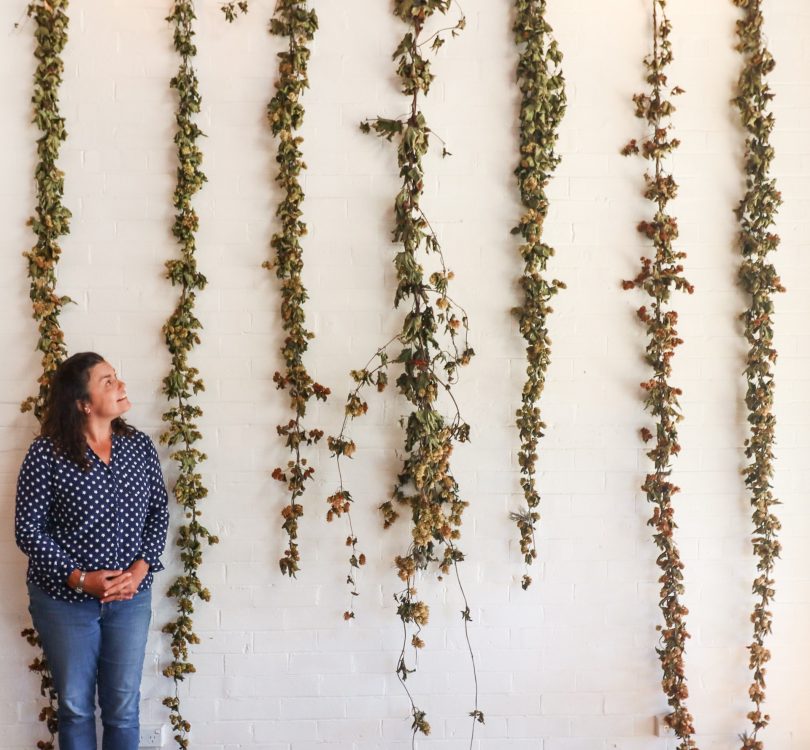 Horticulturalist Courtney Haywood Whipp checks out her hop vines on display at Ensemble and Co in Crookwell. Photo: Hannah Sparks.

Step into Ensemble and Co on the main street of Crookwell right now and you’ll be greeted by the delightfully fruity fragrance of hop vines hanging on the wall.

They’re the result of a relatively new venture and an innovative solution to a disappointing season in Courtney Haywood Whipp’s backyard, a short drive out of town.

The local horticulturalist began growing hops three years ago to diversify her landscaping business and was buoyed with optimism after her first harvest of 5.5kg, which was enough to sell to the nearby brewery in Laggan.

“It was a beautiful crop because they’d grown from fresh crowns [roots], they were getting a lot of water and it was a good season,” says Courtney.

“Laggan Brewing Co made a couple of kegs using the hops and the beer was put on at the local pub. The comments were really positive so that was really pleasing. We could see the potential.”

It was more than Courtney and her husband had expected to harvest in their first year, and their living room, verandah, garage and children’s trampoline were taken over with metres of vine as the pair attempted to hand dry and pick the hop cones.

“There was one benefit: the house smelt amazing,” says Courtney with a laugh.

However, drought hit the following year and unrelenting heat decimated the crop despite the couple’s best efforts to water the vines from their bore.

“We were getting 43-degree days at home,” says Courtney. “Hop vines love the heat but it was too much coupled with the dryness so we decided to leave them be.” 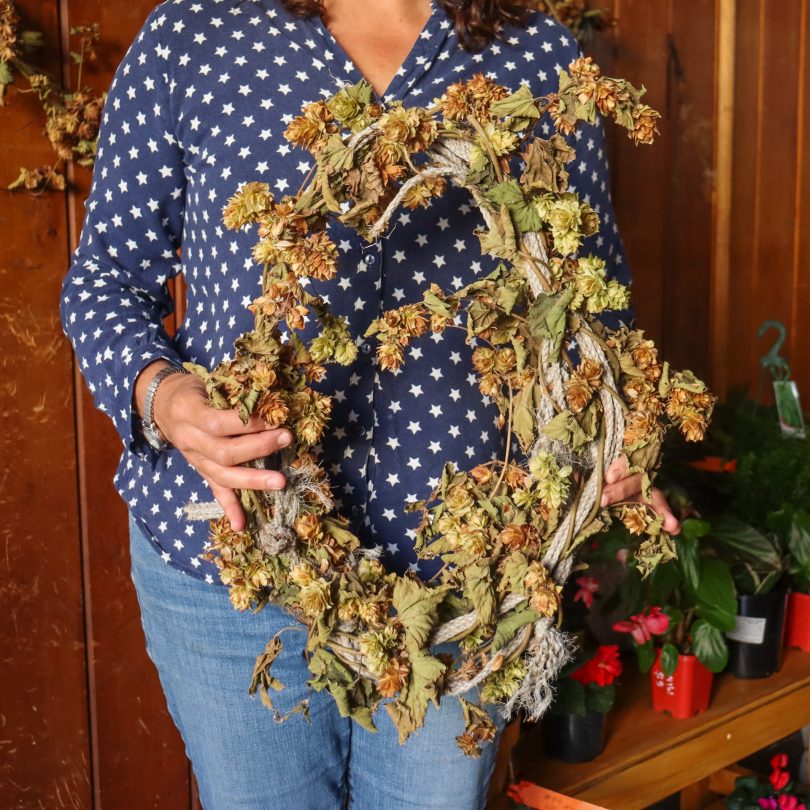 Courtney holds one of the decorative hop vines she made from the decimated crop. Photo: Hannah Sparks.

Things looked promising again in 2020 and the couple was estimating a harvest double the size of their first, until the wind blew all summer, making it impossible to keep the vines supported upright by strings or jute.

That’s when Billie suggested they use the hops to decorate the store where Courtney runs a nursery and create dried wreaths for customers to take home.

The wreath sales will do little more than cover the cost of fertiliser used last year, but it’s about small businesses helping each other and finding the small wins when working at the mercy of Mother Nature.

Growing hops is a large financial investment and Courtney and her husband purchased 250 hop crowns from Batlow, plus the trellises the vines grow up.

However, the biggest investment when growing hops is manpower.

READ ALSO From Abbey Road to a recording studio out bush

The couple spent 30 hours handpicking their first harvest, but have since found and intend to use a machine harvester owned by a commercial hop grower in Bemboka, in the Snowy Mountains.

Courtney says there is enough demand from homebrewers and microbreweries in the Crookwell district to offset the financial investment if the season is right.

“Local people who know I’m growing them are keen to have some hops for their homebrew projects, and there are a lot of small breweries popping up around the area,” she says. “It would be worthwhile if we could get a reliable crop.”

The vines will start to grow again from this winter and will be ready to harvest by the end of summer 2022.

Courtney says her dream is to supply hops to six or seven local microbreweries and would happily offer brewers to pick their own hops so they can control the timing and flavour.

So next time you’re raising a glass in the Crookwell district, ask if your beer has been made with locally grown hops. 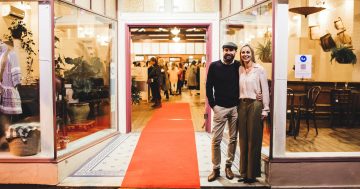