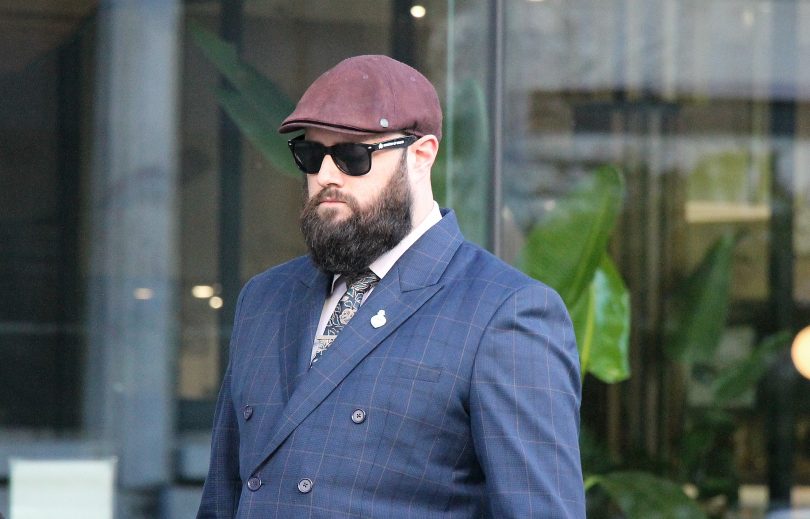 Sometime after Bradley Payne-Moore was charged with possessing child abuse files, he left for a night out, during which the child sex offender ended up having hot wax thrown on him in a Canberra nightclub.

He appeared in the ACT Supreme Court on Friday (June 4), where his lawyer, Andrew Fraser, played close-circuit television footage showing the former strongman in a club in April.

In the footage, a woman could be seen speaking to Payne-Moore, 32, before picking up and throwing something at him.

Mr Fraser said the woman was talking about the case against him and the item she threw contained hot wax which burned his client’s hand.

Payne-Moore was an image consultant for Guardian Gent and described his role on LinkedIn as being there to “help men better themselves”.

Agreed court documents show from October 2019 to February 2020, he possessed 137 files of child abuse material on a mobile phone and two hard drives.

He also used a computer to access seven such files.

The Australian Federal Police received information about his offending in June 2019 and searched his home in February 2020.

Police made a quick search of his computer and found, on the computer’s desktop, child abuse images of two girls aged between eight and 10.

He has pleaded guilty to possessing and accessing child abuse material.

In court, prosecutor David Bloomfield argued Payne-More had shown very little insight or remorse and that full-time jail was the only appropriate sentence.

Mr Fraser said his client was “well aware” of the jail sentence he was facing, but an intensive corrections order would be of more benefit to society by keeping him under supervision and allowing him to serve the community.

Justice Chrissa Loukas-Karlsson told Payne-More how heinous his crimes were.

“You must understand how serious this is,” she told him.

“These sort of offences are abhorred by the community, you understand that, and they must be deterred.”

Justice Loukas-Karlsson will hand down her judgement on 23 June.

Samuel Gordon-Stewart - 8 hours ago
Hmmm. London Circuit near the library would be a good site for a waste facility. Currently has a couple government buildings... View
Megan Hogan - 10 hours ago
Hopefully they’ve considered run off implications for the water courses there. View
News 28