How do bushfires create their own weather patterns? 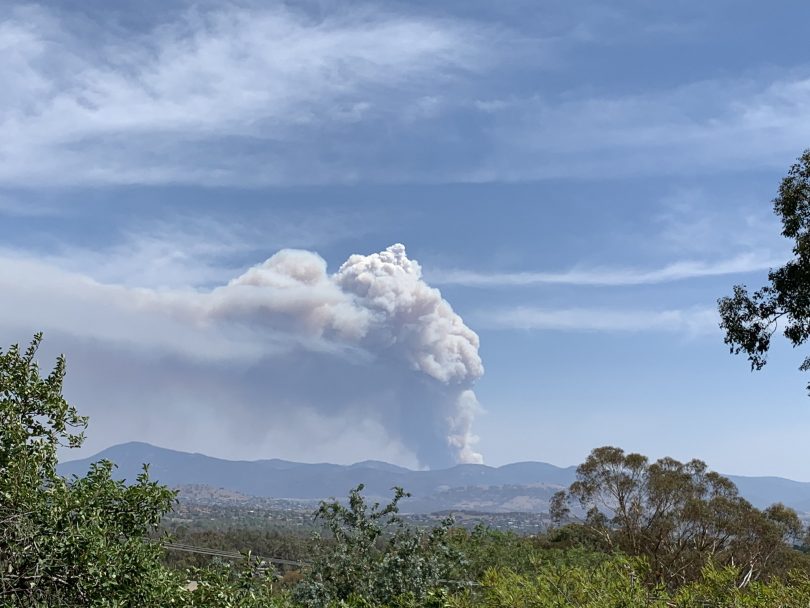 Over the weekend the Orroral Valley fire expanded rapidly. Homes were threatened as the fire created its own weather pattern, adding to its erratic behaviour.

But what does it mean when a fire creates its own weather pattern? Why does this make fire so erratic and unpredictable? Let’s break it down.

The heat and smoke from the bushfire causes air to rise rapidly in a smoke plume. When the fire becomes so intense that air rises further up into the atmosphere than under normal conditions, it starts to form its own cloud system.

When the cloud above the fire gets high enough and strong enough, it can develop into a cumulonimbus or a thunderstorm, Professor Janette Lindesay from the ANU Fenner School of Environment and Society told Region Media.

This is also known as a pyrocumulus cloud because it is created by the fire, or a pyrocumulonimbus cloud if rain is involved (cumulous refers to the cloud, nimbus to rain).

A time lapse of the pyrocumulous clouds forming above the Currowan fire this evening. It was recorded at around 7pm January 4 from Suttons Forest looking toward Bowral.
Thanks to Christopher Mortimer.#nswfires #nswrfs https://t.co/cW1VxtNI9c

“The way clouds are formed is you need to have air rising above what is called the condensation level,” Professor Lindesay, an expert in extreme weather and weather patterns, said.

“The condensation level is the level in the atmosphere where the amount of water vapour (the gas that is held in the air) will saturate the air and then turn itself back into water.

“That depends on the temperature of the air. The warmer the air is, the more water vapour it can hold without being saturated.

“If the fire is intense enough, the air will rise above the condensation level. The relatively small amount of moisture in the air that can condense, will condense.”

After hot air rises higher than it normally would due to the intense heat, cooler air can be sucked in from around the fire zone. This is because rising heat creates lower pressure. The air being drawn in then provides more moisture that heats and rises, repeating the cycle. 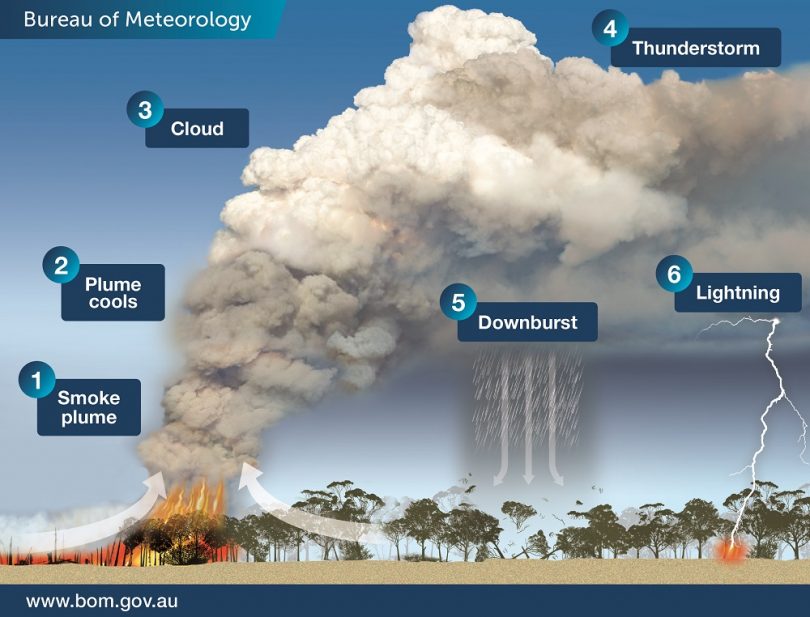 A bushfire can start to create its own weather patterns if it is intense enough. Image: BOM.

“That air will contain some moisture, even if it is a relatively small amount, which will continue to help the cloud formation,” Professor Lindesay said.

“You start to get a circulation system where the fire is sucking air in underneath, then that rises to form the cloud. It then goes out of the top of the cloud and moves out sideways and down again outside the fire zone.”

If conditions are intense enough, the winds can become unpredictable as the fire begins to establish its own patterns by drawing air from different directions to replace the heated air that has risen, essentially creating its own wind.

“If the fire gets to that stage, the winds will become unpredictable because the fire itself is moving and therefore the source of the heat is shifting around.

“It sucks in air from all sorts of directions, depending on the topography. If there is a hill, for example, it becomes very unpredictable for firefighters.

“If the wind is blowing up over the top of the ridge and coming over the other side then it can form almost like a wave, and the wave goes over the ridge and then falls back on itself, and then that makes winds which can blow sideways along the side of the ridge.

“The fire can be advancing on a very narrow front up to the top of the ridge and then starts shooting off sideways.”

Pyrocumulous clouds are an indication of intense updrafts, and can indicate danger for fighting fires. #NBC4You pic.twitter.com/E5SKKVrUmm

These clouds can also cause dry lightning strikes, sparking other fires in the vicinity, as unpredictable winds can propel the fire forward in multiple directions, exacerbating the weather system it has created.

In rare cases, if the system is intense enough, it can even create a tornado as winds start to swirl around at extreme speeds, which is what happened during the 2003 Canberra fires.

“When they make contact with the ground or get close enough, the winds are extremely strong and will create a system that is rotating very rapidly and so the wind is coming from all directions at once,” Professor Lindesay said.

While a tornado is extremely rare and unlikely, the unpredictability of wind direction changing at the drop of a hat, coupled with the chance of lightning strikes starting new fires ahead of the main front, creates a very difficult firefighting environment.

In the 2009 Victorian Black Saturday fires, spot fires were reported to start up to 30km ahead of the main blaze and lightning strikes started a new fire 100km from the fire front, the Bureau of Meteorology says on its website.

Jimbo Lambert - 38 minutes ago
Justo Justo some people have driven that stretch of road for 30 or 40 years at 60km/h. If they suddenly reduce the limit it i... View
Dean Soccol - 2 hours ago
Nathan Grieve in Queensland every time we get a fine we lose points. So if you are one of those that don’t care about the m... View
Nathan Grieve - 3 hours ago
Andrew Nelson not every offence comes with demerit points, so unfortunately that statement is incorrect View
Community 8

What’s happened to our Spring weather? You can blame Sydney for that, too

Rinse and repeat: is the summer’s weather pattern beginning to take shape?

Don’t plan too much for the end of lockdown, heavy rain is on the way

The science of art: BOM releases its 2021 Australian Weather Calendar

@the_riotact @The_RiotACT
Extension of support for #Canberra businesses - especially small #businesses - is welcome, but will it be enough to keep them from disappearing? Local experts have their doubts https://t.co/o4s1D2OGsv (38 minutes ago)