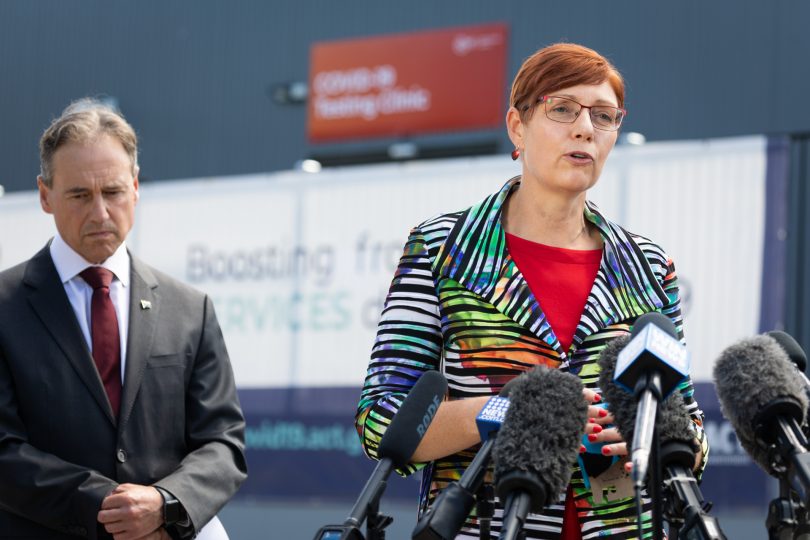 Health Minister Rachel Stephen-Smith says the Government is still finalising details about the second phase of the vaccine’s rollout, which is due to begin on 20 March. Photo: Michelle Kroll.

ACT Health Minister Rachel Stephen-Smith says the Commonwealth, and state and territory governments are still working through the details of how vulnerable Australians who cannot leave their house will be vaccinated against COVID-19.

Phase 1B of the vaccine rollout, which covers elderly adults above the age of 70, Aboriginal and Torres Strait Islander people above the age of 55 and adults with an underlying medical condition including disabilities, is due to begin on 20 March.

Currently, the ACT Government is vaccinating frontline workers in Canberra, while the Commonwealth is in charge of vaccinating aged care and disability residential facilities.

The ACT’s vaccine allocation has been split 50-50 between the two so far, with 1000 frontline workers and 1000 residents vaccinated in the first week.

READ ALSO: AstraZeneca vaccine to commence roll out in Canberra next week

“A lot of those people who receive home care also receive care from our community nurses, so would it be more appropriate to do that in reaching into people’s homes?

“It will probably be a combination of [community nurses and GPs], depending on who is the most likely person who will see that individual, and whether they can travel or whether they are housebound and are unable to get to a health facility.”

Ms Stephen-Smith said the ACT Government is still trying to determine what phase 1B will look like in the ACT.

General practitioners are also working to distribute vaccinations from phase 1B, and Ms Stephen-Smith questioned whether they would be responsible for administering the vaccine to vulnerable Canberrans receiving in-home care.

“Will that be the responsibility of general practitioners and the hubs that they may set up? Or are they going to do their own patients as part of their standard patient care?” she said.

“There is a bit of a logistical challenge [compared to] a business as usual vaccination … recognising that [GPs] will need to use all the doses in a multidose vial within the time frame that they need to be used once that vial has been opened.”

Pharmacies will then join the rollout from phase 2A, which covers adults over the age of 50, Aboriginal and Torres Strait Islander people over 18 and other critical and high-risk workers.

The rest of the adult population will be eligible for a jab in phase 2B. Any Australian who wants to be vaccinated will be able to receive the jab by the end of the year, Chief Health Officer Dr Kerryn Coleman said.

For more information about the vaccine and its distribution in the ACT, visit www.covid19.act.gov.au.

Needs to be a bit more organised than 'we might use community nurse.'

Not everyone stuck at home sees a nurse.

Ian E Wheeler maybe somewhere you can register if you don't see community nurse and are unable to get out to receive the shot. 🤷‍♀️

Maybe the carer can arrange for the community nurse. It is not prohibitive. Then again the government could contract Aspen to do a door knock.

Should be done via the nurse walk-in centres.

Robert Hawes that would require the person leaving their home and needing transport, both of which may not be suitable or possible.

I had many community patients last year during COVID asking for us to give them their flu vaccination as they didn't want to leave their home. It was frustrating that we were unable to so it will be interesting to see what comes of this.

Smackbang - 55 minutes ago
How about you stop passing judgement on someone you know precisely nothing about? View
Opinion 86

Ian McLeod - 9 hours ago
Jeff Smith I see your point but I don't think planners expected the Brindabellas to become such a valuable resource for menta... View
Jeff Smith - 9 hours ago
I used to hold the same views, but then I realised that Not building across the river is just an artificial barrier. CMAG has... View
Ian McLeod - 12 hours ago
We absolutely should not build across the river right up to the Brindabellas either as certain politicians have been pushing... View
Property 15

assiduous - 9 hours ago
Low lending standards and inflated bonuses for originating mortgages based on ever rising values are core features of our ban... View
Pradeep Bishwakarma - 10 hours ago
Crazy market Shiva Sapkota! Only the RBA Can fix this View
Rebekkah Patton - 11 hours ago
Jamie Patton the price 😱 View
Community 13

Julie Macklin - 18 hours ago
I cycled and rarely had to face the parking problems people complained about. When it rained I took the bus, even though I ha... View
Maya123 - 18 hours ago
We had flexitime and we had clocks, do there was no way someone could cheat on their hours. Whether the individual actually w... View
Julian Hayes - 18 hours ago
Because I've seen the truth employers simply make their employee's work a 12 hour shift as its still within not having to pay... View
Opinion 1

ChrisinTurner - 19 hours ago
When did the Stanhope plan expect this expansion to be finished? 5 years ago? View
News 12

chewy14 - 23 hours ago
I think it's unfair that people who work more years than I do, in jobs that pay more than mine does, end up having more money... View
show more show less
*Results are based on activity within last 7 days

@The_RiotACT @The_RiotACT
Fancy a home with a 'holier than thou' atmosphere and traditional Victorian features? The Convent might be just what you're after https://t.co/AYQBE6Ww6Q (30 minutes ago)