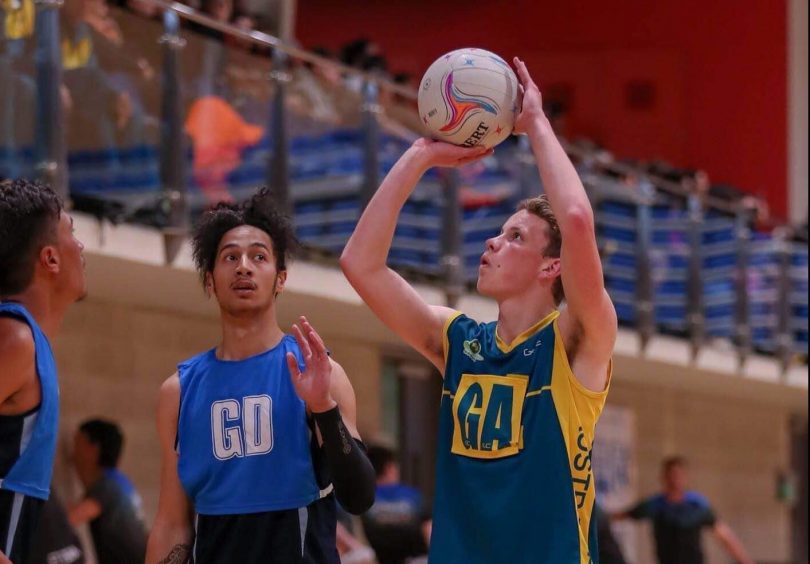 Josh Rochow goes on the attack for Australia. Photos: May Bailey – Clusterpix Photography.

Josh Rochow admits his quick rise in a sport that he had never played three years ago is extraordinary.

It’s not often that filling in for a family friend’s netball team leads to representing your country, but that is what happened to the local teenager.

In December 2016, Rochow, who had played basketball since he was nine-years-old, was asked by his family friend to play for the ACT u17s netball team so they could make up the numbers to go to nationals. The decision was an easy one for the former Radford College student.

“One of the reasons why I agreed to help them out was because I heard nationals was at the Gold Coast, and I love the Gold Coast so that is why I went,” he said with a grin on his face. “Half the team were basketballers and the other half were Aussie Rules players and only one player had played netball, but we still finished the competition in the fourth spot.”

Less than six months later, Rochow was named to represent Australia in u17s and has gone on to represent his country across the ditch twice.

The 18-year-old still remembers his friend’s reactions when he first told them he was going to start playing netball competitively.

“They all laughed and didn’t believe me. One of my family friends asked if I would be running around in a mini-skirt,” he shared. “At the time it was a little offensive but you get used to it and it’s kind of grown on me now.” 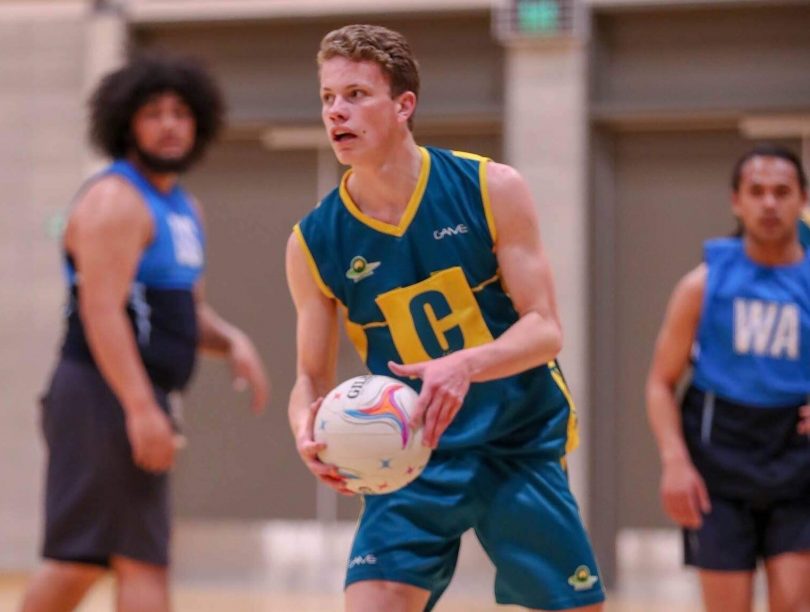 Now put up as a poster boy to encourage more boys to play netball, Rochow said seeing his face advertised sits well with him.

“The netball community is not the biggest and I have found out that I am known by a lot of people that I have never met before,” he said with a laugh. “I was used in advertisements for the Australian netball team which was a little odd at first but I like it now.”

Rochow has now officially decided to pursue his netball competitively and just play social basketball with friends and encourages other boys to swap sports and play netball instead.

“Because the men’s sport is small, you get the chance to travel around the country and internationally with guys who become some of your closest friends,” he said. “Even though you are playing a competitive sport, it is still a great social event where you can make new friends.”

He will soon make the trip to Victoria to represent the ACT u20s men’s side at the 2019 Australian Championships with the longterm goal of representing Australia at the inaugural Mens & Mixed Netball World Cup that will be held in Perth next year.

Karina Agnew there is hope for Dave

I’ll be sure to let him know Tim 😉

And wearing the green and gold is a nice bonus

Anne Collins!!!!! So exciting!! I might need to get Aidan I to it - he played in his school mixed teal last year and loved it!

TimboinOz - 26 minutes ago
Dear Zoya, Australian music - for me - encompasses all the classical performers, as well. So, why not, for you?!... View
Lifestyle 4

TimboinOz - 30 minutes ago
Good information on this issue has been around for at least two decades to my memory. As a former infantryman and an ongoing... View
Food & Wine 4

Nick Swain - 34 minutes ago
This is a challenge to the Fyshwick Markets and their new owners! View
News 201

Adam Best - 36 minutes ago
Josh Anderson We still have demerit points, champ....... View
Adam Best - 37 minutes ago
Steven Miller well yes, actually. If it's a financial penalty for a crime, then that financial pain should be equal for the e... View
Jess Thomas - 2 hours ago
David Deb Cossart that's the thing: people who can afford the fine can afford to speed. Changing this would mean that no-one... View
Food & Wine 1

@the_riotact @The_RiotACT
#Tumbarumba's saddled up for its social event of the year this Saturday 29 January. #Turfclub president John McIntyre says the Tumba Cup's set to be one of the best as #families get together after COVID lockdowns https://t.co/U3sL5ZTdwY (45 minutes ago)