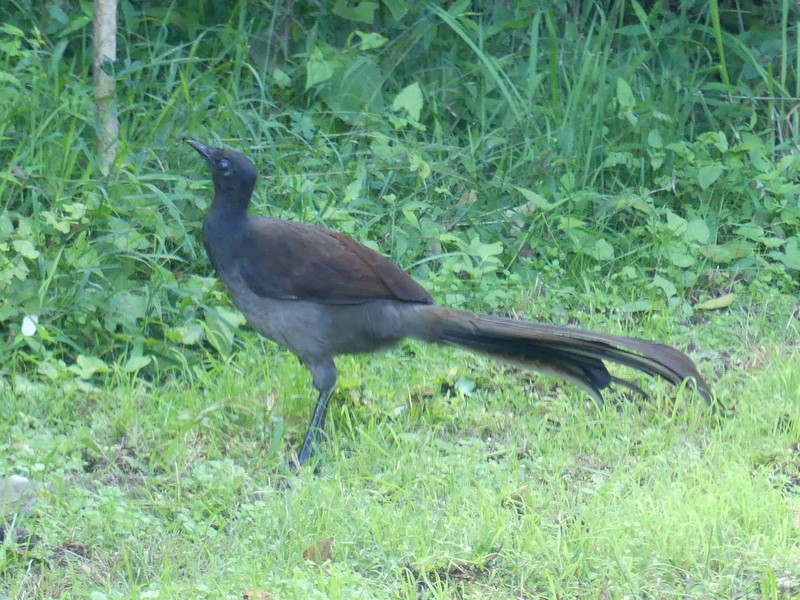 The female lyrebird, recognised by her smaller tail, does all the child-care. Photo: Supplied.

Recently I had a chat on local radio about some of the impacts of the current summer on wildlife in and around Canberra. I wasn’t at all surprised when someone called just after the interview to ask about the effects of drought and fire on lyrebirds in the ranges.

People really care about lyrebirds, and with good reason. There are two species and they are uniquely Australian. They are also among the most ancient of living modern songbirds and one of the largest.

Locally the Superb Lyrebird is common in the ranges and wet forests of the south-east, though we hear them more often than we see them.

For much of the year, the calls come as clear silver bolts of sound through the mists, but in winter the males perform on their cleared dancing mounds, stamping with their mighty tail cast forward over their head in a shimmering veil. 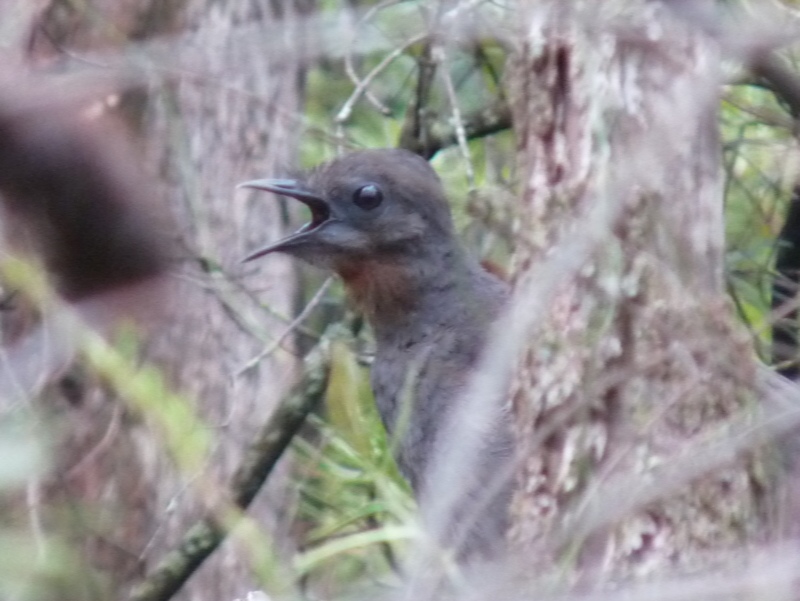 The male lyrebird’s song is one of the loudest and most complex in the world.

Then their calls become a great concert of virtuosic mimicry, a cascade of calls perfectly copying a string of other bird species. I have heard a stream of kookaburras and currawongs, the complex glorious song of a Grey Shrike-thrush and the rasp of a Satin Bowerbird, distant black cockies and nearby Gang-gangs, the rush of a flock of calling Crimson Rosellas, complete with the wind in their wings – and all from the displaying lyrebird in the gully below.

His message is, I believe, “listen to me – I’ve lived a long time to perfect this concert, so I’m a survivor. I’m the one you want as a dad to your chicks!”

But back to the question about how the lyrebirds are coping with the fires.

In January 2003 I was offered the doubtful privilege of accompanying a group of ACT parks service personnel into the Brindabellas. It was the first inspection of the aftermath of the horrendous fires that burnt close to 95 per cent of Namdadgi National Park. My role was to help report on the impacts and, in due course, the recovery process.

I recorded that in some 70 km of driving in the ranges that day we saw not one square metre of green. But we did see ‘large numbers’ of lyrebirds, picking hopefully in the ashes.

How did they survive what was truly an inferno? We have one clue in this account from a miner caught in severe fires in Central Gippsland in 1932: “When the fire descended, Mitchell took refuge in the river and waited for it to pass. He was, however, not alone; because, from eight o’clock in the morning, three hours before the fire reached him, ‘the lyrebirds began to flock from the higher country to take shelter in the river’” (cited by LH Smith in Life of the Lyrebird, 1988).

I was interested to hear a similar story from a property owner in Victoria just recently, but amused to read that this was regarded by commentators as unheard of. Another clue comes from accounts of miners sheltering from fire in a mine shaft, and finding themselves sharing it with several lyrebirds.

Lyrebirds survived fires long before there were mine shafts, and I believe that wombat burrows are very important fire refuges for many smaller forest animals, including lyrebirds.

We don’t know yet for certain how the Namadgi lyrebirds have fared this time, but I am optimistic. More of the ranges have been spared this time than in 2003 (I am writing this just after 80 mm of rain has fallen on the fire ground, so am assuming that the fire won’t spread much further) and I expect a few more unburnt refuges.

This will aid both flame survival and increase the likelihood of the survivors being able to find food – I think that most survivors in 2003 subsequently starved.

This has, of course, not been just another summer in terms of the scale of forest destruction, but lyrebirds in Namadgi have seen somewhat similar summers before, and survived them, so I think they will this time, too. As for future summers, well that is down to us.

Saw a very healthy one today in Tallaganda SF

Scott Holliday yes, I saw that earlier this year. Quite remarkable.

Is there any creature as chill as the brilliant Australian lyre bird? If only Scott Morrison was half as smart.

I visited a burned out forest community on te south coast and they said the lyrebirds dug themselves into the mud of the dry creek with their beaks sticking out to breathe as the fire went through. When it was gone the lyrebirds reappeared. I have never heard of this but the locals said it was what they saw.

CF Lou I heard the same story in that area too.

Collecting memories so we’ll never forget the firestorm of 2003