How the iconic tin candle put Quandialla on the map 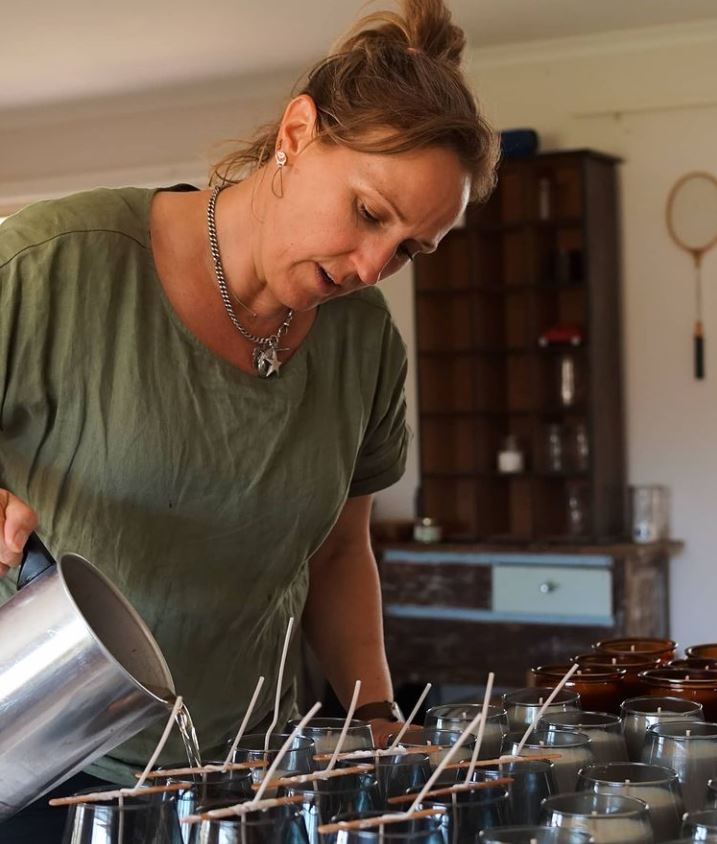 The small country village of Quandialla, in the NSW Central West, is famous for its candles. They are the village’s most searched for item on Google, before the school, pub and hospital.

Quandialla Candle Company’s success can be attributed to Sarah Ryan. But even though she was born a local, she wasn’t born into candlemaking.

The former high school visual arts teacher started making candles as a hobby while pregnant with her and her husband Trevor’s third child, Clementine, in 2011.

Fed up with seeing candles in generic jars, Sarah set about creating a candle with an olde-worlde touch. Inspiration came from a 1943 yeast tin that was collecting dust in a little old cottage on the Ryan family’s farm at Quandialla.

“It was this beautiful round tin with a navy blue and cream paper label,” says Sarah. “It had this gorgeous ‘scrolly’ font and quite a wordy description.

“I thought it would be wonderful with a candle in it so I took a photo and sent it to my designer friend. He knew exactly what I was after and quickly sent back the label that’s on the tin now. I chose the name Quandialla Candle Company because it rolls off the tongue.” 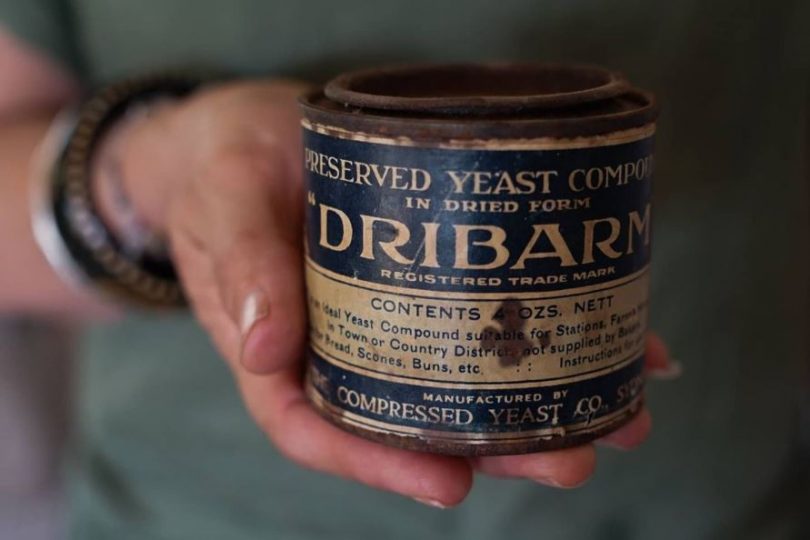 Sarah makes the candles from her studio at home and is proud to see her hometown’s name displayed in shops all over.

“Quandialla is such a cool name,” she says. “It’s probably not ideal for people searching for it on Google because it’s hard to spell, but I thought it was a way of putting the town on the map. Now if you tell people you’re from Quandialla, they say, ‘Oh, the candles!'”

The candles are made from soy wax, which lasts longer and is better for the environment than traditional wax.

Each candle is handmade by Sarah and each label is handwritten on one of Sarah’s five typewriters, which are in different working orders.

“I’ve got an electric one but sometimes the letters don’t stick all that well to the label,” she says. “I love using the old-fashioned ones because the letters come out a little bit crooked, although they’re hard on the fingers.”

Candles elicit comforting images of a warm bubble bath on a rainy day, or a slow-cooked dinner with wine and friends. Sarah loves hearing the memories people make with candles and having them around the home – especially lately with the mouse plague. 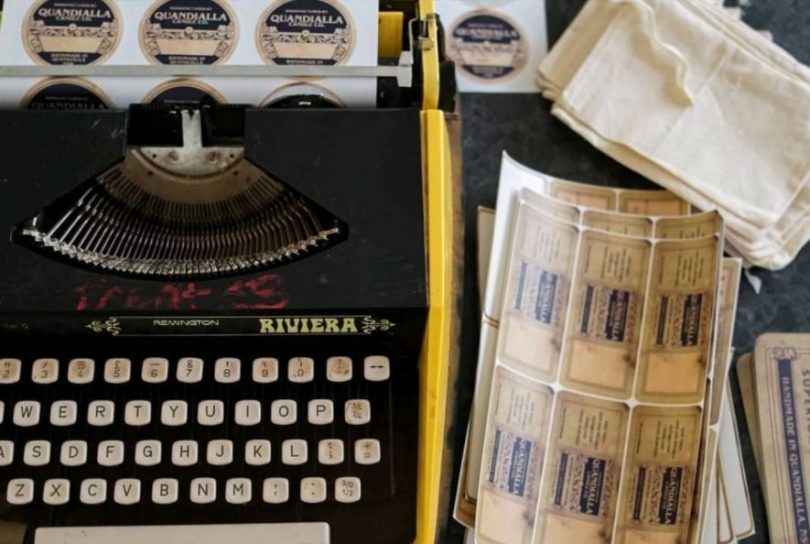 “Lighting a candle is such a nice ritual, especially in winter around the fire or at night,” says Sarah. “Everyone loves a scented candle.”

However, she never imagined her candles would provide her with a full-time job shortly after selling them for the first time at the local preschool market. Now, Quandialla Candle Company can be found in shops across NSW.

While most of the time it’s a one-woman show, Sarah ropes in her friends during busy times. One of those is when she’s making the annual Christmas candle, which has become something of a collector’s item.

“I sometimes call in a girlfriend and just get her to unpack the tin boxes or put wicks in the containers – I’ve tried to get my kids to help and even offered to pay my two teenage sons, but it doesn’t seem to work,” says Sarah with a laugh.

When it comes to finding the fragrances, such as the Weddin Mountains Bush Walk candle, Sarah works backwards. 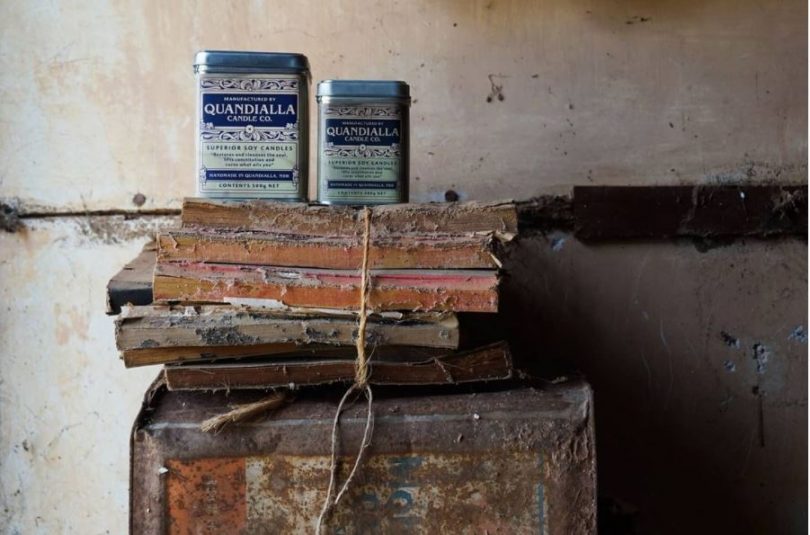 The square candle tin that put Quandialla on the map. Photo: Supplied.

“I buy a lot of fragrance samples: base notes, middle notes and top notes,” she says. “I can decide I want something that’s got a grassy/leafy/herby smell or a woody smell. I’m not a perfumer so that can be difficult, but you can get the fragrances already made.

“There was one fragrance I tried that was described as ‘leafy Australian native’ and it reminded me of walking out in the bush. Those smells of fresh pine, or eucalypt and wattle flower we come across in the Weddin Mountains where we go bushwalking.”

Sarah isn’t one for airs and graces and has grown a strong social media following for her authentic posts that give us a window into life on the farm, including when family takes priority and orders fall behind.

READ ALSO: A colourful character shares his memories of Moruya

“I’m not very good at pretending,” she says.

It’s this connection and beautiful images of candles stacked on old books or perched in a cosy corner that leave you wanting to purchase Sarah’s candles.

Theresa Harmer home for you!!! ❤️

Alice Fennell Quandi gets a mention! Always loving my Quandi candle you gave me years ago 💕

Calling Quandi small is a bit of an understatement

Louise Earl - 2 hours ago
I love Canberra … but yes.. Canberra has missed the boat on a lot over a lot of years! Not just AFL. View
Matt Bacher - 7 hours ago
Michael Bourke …..as you and I can attest to mate 🤣 View
News 156