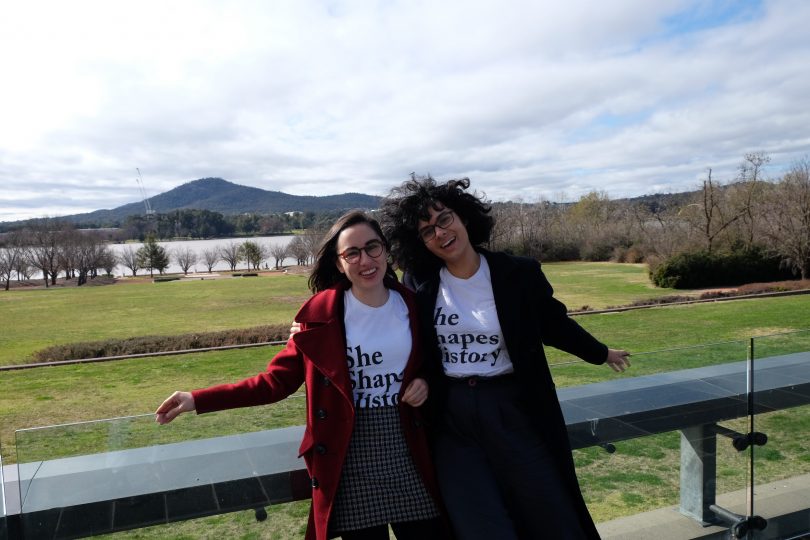 When it all got too much for Junie Morosi in the politically charged 1970s, she would steal across to the Ladies Rose Garden for a quiet lunch by herself.

It was her way of escaping the chaos that was Old Parliament House.

This little-known safe place provided some sanctuary for Junie who was thrust into the public spotlight in 1974 when the then Deputy Prime Minister and Treasurer, Dr Jim Cairns, appointed her as his Principal Private Secretary.

After the appointment, she was asked at a press conference about the “sexual innuendoes in your relationships with Dr Cairns and the [then Attorney-General, Senator Lionel] Murphy”.

“There is certainly no truth to any such thing – to any of those things,” she said at the press conference. “I pride myself in my capacity as a professional woman and I find these [innuendoes] very hurtful.

“I submit I would not have been subject to any of this had I not been a migrant and an Asian.”

Canberra friends and fellow academics, Sita Sargeant and Ripley Stevens, could not agree more. For them, few women in Australian social and political history have had their stories truly heard – or as blatantly misheard – as Junie Morosi.

Even fewer know what everyday life was really like for them, be they household names such as Junie or the partners of politicians who quietly kept life going while their husbands were busy and important elsewhere. 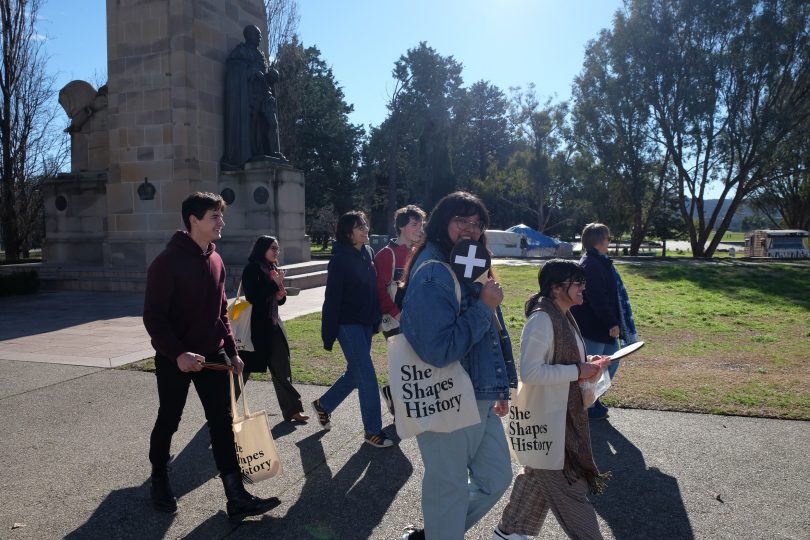 A group sets off on the She Shapes History walking tour. Photo: Supplied.

Sita and Ripley have launched She Shapes History tours, a series of walks that tell the real stories of the women who helped shaped Australia, and show visitors where such history took place.

During their research into where the walks should go and why, the pair met Junie.

“Here was this woman seen then as some sort of femme fatale,” says Sita. “The woman we saw was funny, friendly and charismatic with such an interesting take on what life was like back then.

“She was vilified in the media and no-one has ever corrected it.

“There was no way she wasn’t going to be part of this.”

John McEwan’s wife was also a good example of women behind the scenes at the time, says Sita.

“He was prime minister for about three weeks after Harold Holt disappeared,” she says. “His wife was pivotal in his political campaign. She drove him thousands of kilometres around the country while he sat in the back of the car writing speeches.”

Sita and Ripley have uncovered many unknown stories about Australian women, and can’t wait to spread the word.

“We noticed how the contributions of Australian women were often devalued or dismissed,” says Sita. “We noticed how little we were taught in school about notable women in the fields of literature, politics, STEM and the arts. We noticed a lack of diversity in the stories we were told about our own history.”

So the pair started asking: where are these women?

One way to remember them, say Sita and Ripley, is to travel the roads they once did – particularly the roads of women who were ignored, marginalised and forgotten.

The women believe much of our history has been dominated by larger-than-life characters – bushrangers, convicts and boofy blokes with women cast as minor characters.

“Rarely have women been seen as pivotal to our nation’s story,” says Sita. “Despite persistent exclusion and invisibility, women have continued designing, creating, building, imagining, protesting, protecting, writing, caring and leading social change. They have made some of the most significant contributions to Australian history.”

Sita and Ripley bill their walking tours as an opportunity to share knowledge and women’s stories in an inclusive and non-judgemental context.

“Walk with us through a familiar landscape to encounter an unfamiliar history,” says Sita. “Our tours celebrate the diverse and remarkable ways women have shaped Australia. We aim to inspire you to reflect on how you, too, can shape history.”

She Shapes History tours commence on Saturday, 31 July, starting and ending at the Ladies Rose Garden at Old Parliament House. Only 12 people will be allowed on each tour, which go for about 3km on a wheelchair-accessible trail.

After credit is finally given to the women who made Australia by tracking down their haunts, seeing their secret places and hearing their stories, what’s next for Sita and Ripley?

“Spying,” says Sita. “Where better to tell some of those untold stories, and show people where it all happened than Canberra. ASIO watched women, too.”

You can book online for the first She Shapes History tour on Saturday, 31 July, here.

John McEwan’s wife was, apparently, ‘pivotal in his political campaign’. Yet she is not even given a name in this report.

I hope they retrace Julia’s (one-footed) footsteps down the steps of The Lobby!

Definitely worthwhile. Women need to be recognised so much more than they are

It might be well to remember the very belated truth of the affair between Cairns and Morosi, in 2002:
“Herald journalist Tony Stephens had followed up an ABC Radio interview Cairns conducted with John Cleary on Sunday night. Cairns told the radio audience how he attained his highest popularity rating, according to opinion polls, in April 1975, that is “after six months of Morosi publicity”.

In the next breath the former deputy prime minister boldly declared: “I don’t think the ordinary person thought I was wrong or a fool in going to bed with Junie Morosi. They thought it was a pretty good thing.”

Cleary: “Did you go to bed with Junie Morosi?”

However, …… the idea that some people believe that women DIDN’T shape Australia along with men, just bothers me a bit. Mothers have a LOT of influence on their children of both genders.

Many if not most of my teachers were women.

And, my mother – a war widow for most of my time at home – set very high standards.

One outcome? Very few ill people need to queue at Medicare or their private fund these days, thanks to me in 1994! 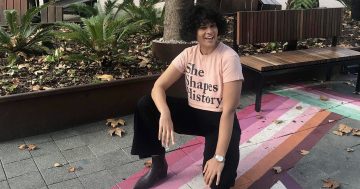 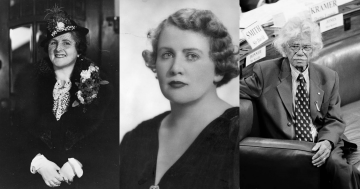