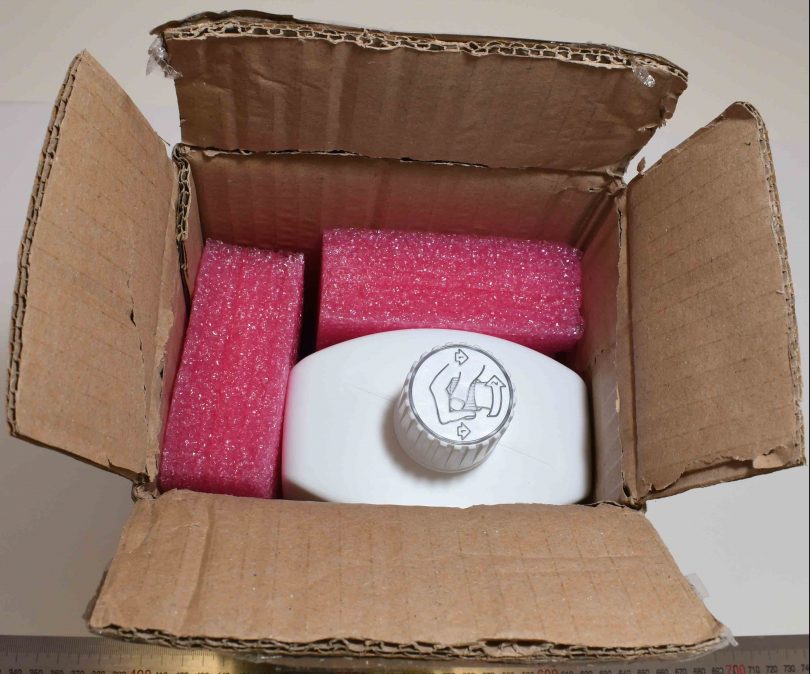 Police seized a parcel containing what they allege to be gamma-butyrolactone (GBL). Photo: ACT Policing.

A single mother allegedly had over a kilogram of an illegal liquid that she believed to be drugs posted to her house before hiding the parcel in a cupboard.

Vanessa Lee White, 48, has been refused bail after it was alleged she attempted to import border-controlled drugs.

ACT Policing said Australian Border Force intercepted a parcel allegedly containing over a kilogram of gamma-butyrolactone (GBL) scheduled for delivery to the Hughes resident on 24 June.

Police said the alleged drugs were replaced with an inert substance, delivered to Ms White’s home on Thursday (8 July) and she was arrested shortly afterwards.

Ms White was unsuccessful when she applied for bail in the ACT Magistrates Court on Friday (9 July).

Her Legal Aid lawyer said the single mother of several children was now willing to provide access to her electronic devices, as requested by a warrant. She said her client had originally not been aware of what the warrant entailed.

She said it appeared the investigation into Ms White has concluded and her client’s main concern was the care of her children.

Her lawyer also said the allegation her client had a propensity to conceal evidence was unfounded, as the alleged items were found at the back of a cupboard, which was not a sophisticated approach.

Prosecutor Zoe Hough opposed bail, saying there was a risk Ms White could interfere with evidence.

She said the prosecution had a very strong case, based on the fact the defendant had allegedly received the consignment.

When she raised the issue of texts sent by and to Ms White, the latter interrupted to exclaim: “I didn’t write any of them.”

Magistrate Glenn Theakston asked what the maximum sentence of the drug charges were, to which Ms Hough replied it could mean life in jail.

But Ms Hough also said the purity analysis of the alleged drugs had not yet happened. She added there were plans to execute more search warrants in the future.

Magistrate Theakston “reluctantly” refused bail due to the risk of Ms White interfering with evidence and adjourned the case to 29 July.

Ms White, appearing via an audio-visual link, began to cry when she was told she would remain behind bars. She waved at people in court before blowing a kiss as she was led off the screen.

“It’s very potent. It has significant effects on people that use it.

“The other thing with GBL is it’s predominately mixed with alcohol [and] used in date rape scenarios.

“But getting the combination right is extremely important. If you get it wrong, just by the smallest amount, it can have lethal consequences.”

He said the amount of GBL allegedly seized equated to “hundreds of deals”.

According to the World Health Organisation (WHO), GBL can be found in paint strippers, nail polish removers, stain removers and circuit board cleaners, but at the end of the 1990s it began to be used for intoxication.