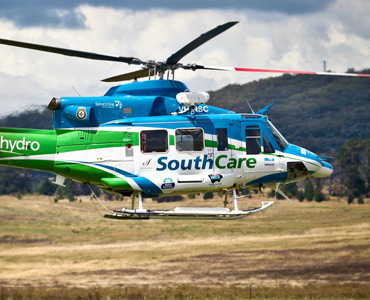 All southbound lanes on the Hume Highway are closed near Goulburn this afternoon while police investigate a serious crash in which four occupants of a Toyota Land Cruiser were injured when their vehicle rolled after hitting a guardrail.

A woman has been airlifted to The Canberra Hospital in a serious condition, while a six-week-old baby boy was transported to the hospital by NSW paramedics in a serious but stable condition.

The male driver and four-year-old boy received minor injuries and were treated at the scene.

According to The Goulburn Post, there was a queue of southbound traffic at a standstill for around 3.5km at 2.20pm, down from more than 8km earlier. The newspaper also reports that Snowy Hydro Southcare was in attendance at the scene, and that the woman was trapped in the vehicle for at least half an hour after the accident.

About 12.40pm, emergency services were called to The Hume Highway Bypass, south of Goulburn, following reports of a single-vehicle crash.

Police have been told the Toyota Land Cruiser was towing a caravan travelling south when it hit the guardrail and rolled.

Traffic diversions are in place while investigations continue.

For the latest information visit www.livetraffic.com.

Police are urging anyone with information in relation to this incident to call Crime Stoppers on 1800 333 000 or use the Crime Stoppers online reporting page: https://nsw.crimestoppers.com.au Information provided will be treated in the strictest of confidence. Police remind people they should not report crime information via Facebook and Twitter pages.

Robert Knight - 16 minutes ago
Gill King oh, I get it. I grew up here and spent many a weekend night watching movies there. I understand it’s cultural val... View
Virginia Dodson - 2 hours ago
Let’s hope it’s heritage listing has more credibility than that of Anzac Hall at the War Memorial. Terrific that an inter... View
Gill King - 3 hours ago
Something doesn't have to be attractive to be important for heritage. I understand the cinema part of the building was ground... View
News 12